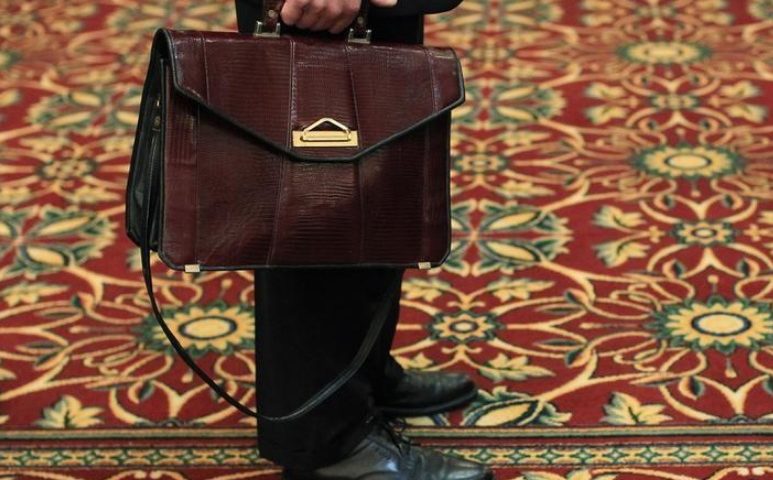 U.S. job growth accelerated in August and wages notched their largest annual increase in more than nine years, the clearest signs that the economy was so far weathering the Trump administration’s escalating trade war with China.

The Labor Department’s closely watched employment report published on Friday also showed slack in the jobs market was rapidly diminishing, with a broader measure of unemployment falling to a level not seen since 2001. The report cemented expectations for a third interest rate increase from the Federal Reserve this year when policymakers meet on Sept. 25-26.

Analysts say the administration’s $1.5 trillion tax cut package and increased government spending were shielding the economy from the trade tensions, which have also seen Washington engaged in tit-for-tat tariffs with other trade partners, including the European Union, Canada and Mexico.

“With the tax cuts and spending increases creating a sugar high, there is little reason to expect labor demand to moderate over the rest of this year or even in the first half of next,” said Joel Naroff, chief economist at Naroff Economic Advisors in Holland, Pennsylvania.

Nonfarm payrolls surged by 201,000 jobs last month, boosted by hiring at construction sites, wholesalers and professional and business services, the Labor Department said. There were also gains in transportation and healthcare employment. 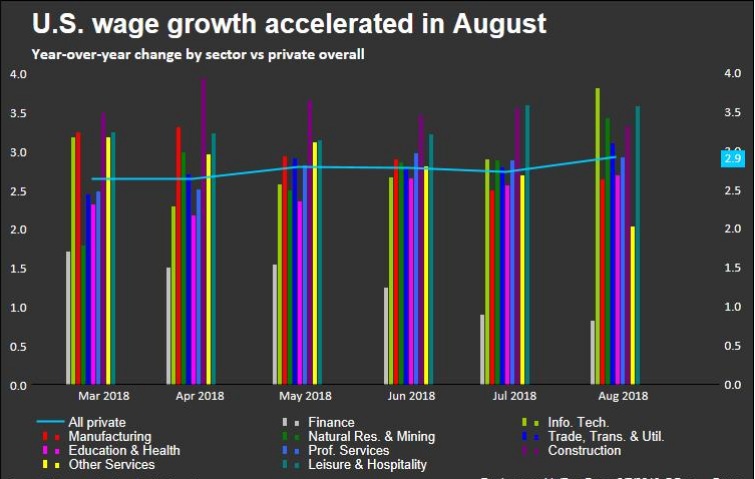 Average hourly earnings increased 0.4 percent, or 10 cents in August after rising 0.3 percent in July. That raised the annual increase in wages to 2.9 percent in August, the largest gain since June 2009, from 2.7 percent in July.

Wage growth has been the labor market’s Achilles heel and last month’s increase fit in with economists’ expectations that inflation will continue to bounce around the Fed’s 2 percent target for the remainder of this year and into early 2019.

“Even if we were to see a reversal of some of the monthly wage gains, short of a collapse, current levels support the Fed’s symmetric 2 percent inflation target,” said Marvin Loh, senior global market strategist at BNY Mellon in Boston. “The market fully expects another hike in September.”

A broader measure of unemployment, which includes people who want to work but have given up searching and those working part-time because they cannot find full-time employment, fell one-tenth of a percentage point to 7.4 percent in August, the lowest level since April 2001.

The unemployment rate was unchanged at 3.9 percent. Economists polled by Reuters had forecast nonfarm payrolls increasing by 191,000 jobs last month and the unemployment rate falling to 3.8 percent. The economy created 50,000 fewer jobs in June and July than previously reported.

Job growth averaged 185,000 per month in the past three months. The economy needs to create 120,000 jobs per month to keep up with growth in the working-age population.

The dollar rallied against a basket of currencies on the report, while U.S. Treasury yields rose. Stocks on Wall Street were trading lower.

LIMITED IMPACT FROM TARIFFS
The employment report added to manufacturing and services industries surveys in suggesting the Trump administration’s protectionist trade policy was having a marginal impact on the economy for now. The economy grew at a 4.2 percent annualized rate in the second quarter, almost double the 2.2 percent pace set in the January-March period.

Economists said the import duties implemented so far have affected only a small portion of the American economy, but warned this could change if President Donald Trump pressed ahead with additional tariffs on Chinese imports.

The United States and China have slapped retaliatory tariffs on a combined $100 billion of products since early July.

Trump on Friday said he was ready to impose tariffs on another $267 billion in Chinese goods, in addition to a $200 billion tariff list that is awaiting his decision. The tariffs on an additional $467 billion would raise duties on virtually all U.S. imports from China.

“If the tariffs on all the imports from China go into effect, significant layoffs will be inevitable with higher prices,” said Sung Won Sohn, chief economist at SS Economics in Los Angeles.

Last month, the labor force participation rate, or the proportion of working-age Americans who have a job or are looking for one, fell two-tenths of a percentage point to 62.7 percent, a wrinkle on an otherwise upbeat employment report.

Job gains in August were almost across all sectors, though manufacturing payrolls fell by 3,000. That was the first drop in 13 months and followed an increase of 18,000 in July. Employment at motor vehicle plants fell nearly 5,000, accounting for the bulk of the drop in manufacturing payrolls.

“This should prove transitory as autos manufacturing payrolls tend to be noisy over the summer months as companies shut down production to retool for the next year’s models, making seasonal adjustment factors less precise,” said Joseph Song, an economist at Bank of America Merrill Lynch in New York.

Employment at sporting goods, hobby, book and music stores rebounded by 9,200 jobs in August after shedding 30,300 jobs in July related to the closing of all Toys-R-Us stores. But retail payrolls fell 5,900 and government shed 3,000 jobs.

Gold Will Need These Catalysts for Long-Term Growth