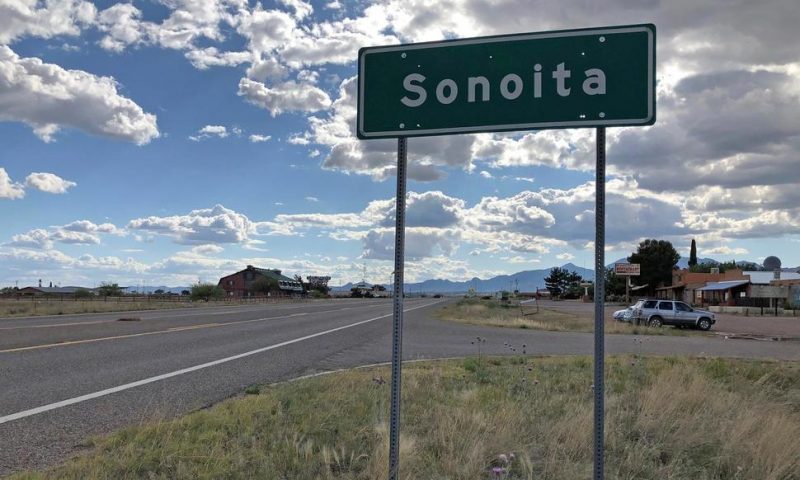 Native American tribes and environmental groups are fighting plans for an open pit copper mine in the Santa Rita Mountains of southeastern Arizona, arguing that it could irreparably harm ancestral Indian lands and harm water supplies and wildlife habitat.

The Milepost 44 pullout offers a panorama of the range in the Coronado National Forest where a Canadian firm wants to carve out a massive copper mine near Tucson. The $1.9 billion Rosemont Mine, at a half-mile deep and a mile wide, would sprawl across federal, state and private land, leaving a waste pile the height of skyscraper.

Native American tribes and environmental groups have sued to stop Hudbay Minerals Inc. of Toronto, arguing its mine could desecrate sacred, ancestral lands and dry up wells and waterways while ravaging habitat for endangered jaguar and other species. Last week, they asked a federal judge to prevent the project from proceeding until the lawsuits are decided.

“I pray to our Creator every morning that things will work out,” said Austin Nunez, chairman of the Tohono O’odham’s San Xavier District, a piece of tribal land just south of Tucson. “Our ancestors’ remains are there, along with archaeological sites, including a ball court. We cannot risk any further harm to our ancestral heritage.”

The Tucson and state chambers of commerce are Rosemont cheerleaders, noting the project will immediately create 500 jobs and pour $16 billion into the local economy over 20 years.

The fight comes amid a larger battle across the West over using public lands for mining.

The Trump administration in late 2017 slashed about 85% of Utah’s Bear Ears National Monument to allow for mining claims. New Mexico tribal leaders have pressured U.S. officials to ban oil and gas exploration near the remnants of an ancient Pueblo civilization at Chaco Culture National Historical Park. And conservationists fret over plans to reopen a gold mine in California’s Castle Mountains National Monument, home to ancient rock art and a Joshua tree forest.

“You could go to virtually every state and find a push by big corporations to grab resources before it’s too late,” said Richard White, a historian of the American West at Stanford University. “It’s a resurrection of these extractive industries that were so much a part of the Old West.”

Arizona produces about two-thirds of U.S. copper for wiring and other electronics, generating about $5.38 billion in 2017, according to the Arizona Mining Association. “Mining in Arizona represents 60,000 jobs,” said Amber Smith, president and CEO of the Tucson Metro Chamber of Commerce. She is confident Hudbay will mitigate any potential problems by building extra roadways and employing technology to recycle water used in the mining process.

Arizona Chamber of Commerce and Industry spokesman Garrick Taylor said Rosemont would be among the biggest construction projects in Arizona history. “Its impacts will be measured in the billions of dollars,” he said.

Responding to questions in writing, Hudbay told The Associated Press that delaying the project would result in “significant financial costs” and “we’re proposing in the short term to move forward on aspects that don’t fall under the litigation.”

The company said the current project was the result of a dozen years of review and “it’s designed intelligently and in accordance with public and policy priorities.” It has told Tucson officials the mine would not harm water quality or affect supplies.

Still, environmentalists worry about the impacts on the Santa Rita Mountains, where white-tailed deer and black bear, bobcats and the occasional cougar roam among the Apache pines and Douglas firs. Numerous kinds of hummingbirds and woodland warblers fly through Madera Canyon, among the world’s premier bird-watching spots.

Randy Serraglio, a conservation advocate with the Tucson-based Center for Biological Diversity, predicted ore trucks would rumble down a scenic highway built in 1927 that stretches some 50 miles (80 kilometers) from Interstate 10 to the tourist hotspot of Sonoita.

“It’s going to look like a nuclear bomb was set off,” he said.

“The mine will have a direct, negative and permanent impact on our business,” said Bostock, whose Dos Cabezas winery annually produces some 5,000 cases of dry red, rosé and white wine. “They are gambling with our investment and our livelihood.”

Rosemont detractors also point to the yawning Lavender Pit, a former open pit copper mine outside Bisbee that still scars the landscape 45 years after ending operations.

Serraglio’s group, along with Save the Scenic Santa Ritas, the Arizona Mining Reform Coalition and the Arizona Grand Canyon Chapter of the Sierra Club this year sued to stop Rosemont, as did the Tohono O’odham Nation, the Pascua Yaqui Tribe and the Hopi Tribe.

The environmental law firm Earthjustice filed the recent request for an injunction to stop Hudbay from revving up its bulldozers. U.S. District Court Judge James A. Soto has said he hopes to rule on the first three suits by summer’s end before tackling two more recent ones filed over a Clean Water Act permit granted by the U.S. Army Corps of Engineers and a mine operations plan approved by the U.S. Forest Service.