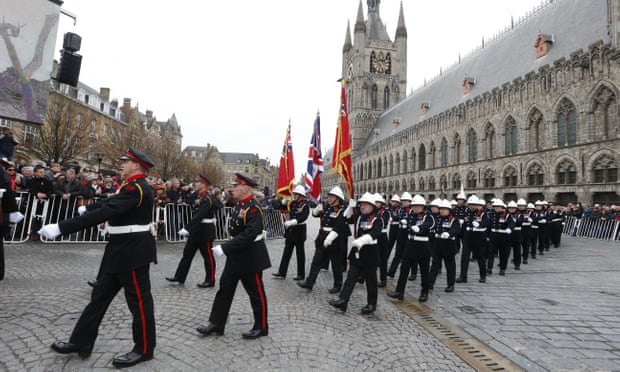 Under a light-grey sky, eight buglers in greatcoats sounded the Last Post. Silence fell among the many thousands gathered at Ypres’ Menin Gate, as Europe remembered the 100th anniversary of the end of the first world war “at the 11th hour of the 11th day of the 11th month”.

At its inauguration after the war, a long line of ashen-faced mothers, struggling to hold back their anguish, and fathers marching sternly with trembling lips, had snaked through this flattened town up to and under the gate.

Blinded veterans had run their fingers over the newly carved bone-white Portland stone to feel out the names of fellow soldiers who had lost their lives, and whose bodies had never been found.

“A more sacred place for the British does not exist in the world”, the then secretary of state for war, Winston Churchill, had intoned.

Today, at what will surely be the last great act of remembrance of the great war here, at least for the sons, daughters, nieces and nephews of those who served and sacrificed in Ypres, a commitment was renewed to learn the lessons of the past in defiance of the fading in living memory of what happened on Flanders’ fields.

As the silence ended at the gate a mournful bagpipe lament was played by pipe major John Fraser before blood-red poppies floated down in the still air from the gate’s high arch.

Benoit Mottrie, the chairman of the Last Post association, the 24-strong voluntary organisation whose buglers have remembered the fallen at the setting of the sun every day at the gate for 90 years, told those gathered that remembrance must continue after the close of the centenary. “Only then will we be worthy of the legacy of the men of 1914-18”, he said.

Of the 300,000 British and Commonwealth soldiers killed in the Ypres Salient during the five battles that spanned the war, 100,000 bodies were never recovered. The battlefield mud was so thick it swallowed men and horses whole. “The world’s worst wound,” the soldier and poet Siegfried Sassoon wrote of Ypres.

Ypres, Ieper to the Belgians, or “Wipers” to the British forces who fought there, was where the Germans first deployed poison gas on French forces, whose initial reaction had been confusion at the sight of the almost liquid grey-green cloud floating through the trenches, leaving men drowning, clawing at their own faces and throats to get air.

The remains of dozens of men are still found every year in Flanders fields, identified initially by the colouring and markings of the boots.

Theresa May, the prime minister, said she would be thinking of her father’s cousin, Hubert Grant, who fought and died at Passchendaele, the third battle of Ypres, at the age of 19.

Churchill had wanted to keep the ruins of Ypres preserved as a reminder of the horror, unrecognisable as they were from the former market town after four years of German barrages.

It was agreed instead to rebuild the city precisely as it once was, and construct the Menin Gate on the main road out of the city along which British soldiers had passed on the way to the western front.

The Menin Gate, which opened in July 1927, bears the names of 54,395 of the missing men while the names of the rest are displayed on nearby memorials at Ploegsteert and Tyne Cot. Field Marshal Lord Plumer had declared at the unveiling of the memorial: “He is not missing, he is here.”

The Last Post had been played at the 1927 ceremony for the first time by buglers from the Somerset Light Infantry. It was a year later that five locals, including the local chief of police, commander of the fire brigade, and a store owner, Aime Gruwez, formed the Last Post association.

Mottrie, Gruwez’s grandson, said he had never seen crowds like those this weekend. “The busiest time I have ever witnessed,” he told the Guardian.

“In the 1950s, 60s, 70s it was often just the two police stopping the traffic, the buglers, and maybe a handful of people, sometimes no one,” he said. “There was certainly a time when it was difficult to continue our mission but we continued with our duty.

“The change came with the visit of the Pope in 1985. That gave us a lot of interest all over the world and that was the starting point of more interest … We don’t think we will be alone again.”

Eleanor Foulkes, 28, travelling with her uncle, Paul Burkitt, 66, from Stourbridge, the West Midlands, who lost two great uncles in the war, said: “The importance of remembering cannot be overstated, especially for my generation as the war gets further and further away”.

Gary Rollins, 60, from Birmingham, a former staff sergeant in the Royal Army Medical corps, who served in the first Iraq war, said: “We lost Frederick John Rollins, who was just 18 in 1915. I don’t think the people here will stop remembering.”

Elsewhere in Belgium, George Barkhouse, the great nephew of Pte George Lawrence Price, a Canadian believed to have been the last British empire soldier killed in the war, was in Mons for a liberation parade involving troops from Canada.

It was there that the 25-year-old was shot in the heart by a sniper, as he tried to move civilians out of a group of houses occupied by a German troops. He was tended to by a Belgian nurse but died moments later in her care. It was 10.58am. “He was engaged to be married. It is so important I am here”, said Barkhouse, 89. “To mark how my great uncle has been honoured as the last man. We talk about him a lot in the family. We remember him.”

Conflicted Italy hovers on the brink of renewed hard times