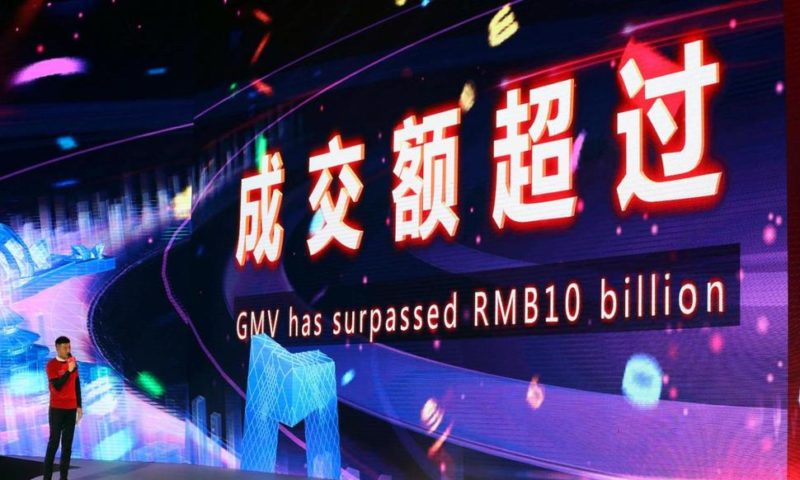 Shoppers in China have once again broken records after spending more than $14 billion within the first two hours of an annual online retail frenzy.

The spending binge breaks from gloomy forecasts about the world’s second-largest economy, which is struggling with a tariff war with the U.S., a stock market slump and slowing overall growth.

Known as Singles Day, the clamor for deals and discounts was heralded with characteristic fanfare by Chinese e-commerce giant Alibaba, which has turned an unofficial holiday for people without romantic partners into a yearly windfall for digital retailers.

A massive screen at Alibaba’s gala in Shanghai showed the surging sales numbers in real time: At 2 minutes and 5 seconds after midnight, 10 billion yuan ($1.43 billion) in purchases had been made on Alibaba’s platforms. By the 1 hour and 47 minute mark, that number had increased tenfold.

Singles Day began as a spoof event celebrated by unattached Chinese university students in the 1990s. In Chinese, it’s called “Double 11,” after the numbers in the month and date. The improvised holiday has since been co-opted by e-retailers and transformed into China’s version of Cyber Monday — the busiest time for online shopping in the U.S.

The Twitter-like Weibo platform was blanketed with Singles Day-related posts on Sunday, from users proudly proclaiming that they had resisted the shopping urge this year to those who cheerfully listed an array of mundane purchases.

Alibaba founder Jack Ma, who will step down as chairman in less than a year, attended the start of the gala in Shanghai and appeared in a video message in which he wrapped up live hair crabs, a popular online purchase.

Singles Day “is not a day of discounts, but rather a day of gratitude,” Ma said in the video. “It’s when retailers use the best products and best prices to show their gratitude to our consumers.”

Chinese e-commerce platforms have come under fire in the past for peddling low-quality and counterfeit items. Hong Tao, an economics professor at Beijing Technology and Business University, said Singles Day encourages shoppers to prioritize cheap prices over high quality, causing them to purchase items they don’t need.

“People are swept up in the festivities,” Hong said in a phone interview. “This burst of consumption, confined to just one day, can be exhausting for both buyers and sellers.”

While both Alibaba and competitor JD.com have pledged to use biodegradable packaging to cut down on waste, research conducted this month by Greenpeace East Asia said many plastics marked “biodegradable” and used by Chinese e-retailers can only break down under high temperatures in facilities that are limited in number across the country.

Greenpeace estimated that by 2020, “biodegradable” packaging could produce roughly 721 truckloads of trash in China every day.

Thousands gather at Ypres for last great act of remembrance