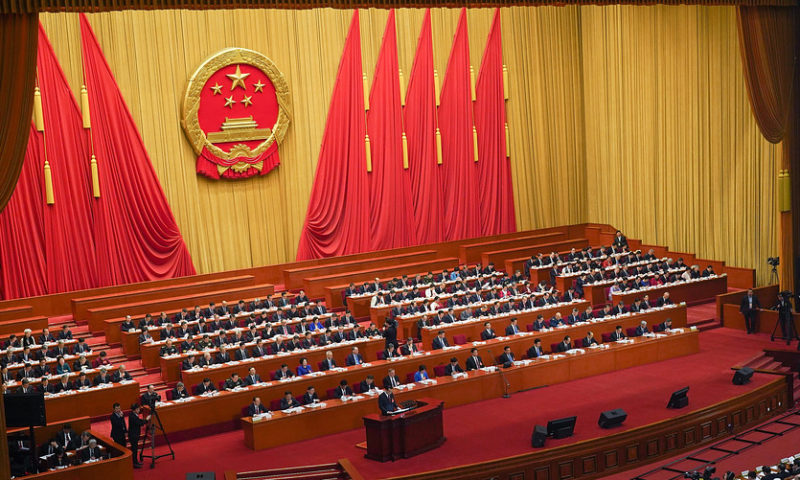 U.S. stocks closed slightly lower Tuesday after major benchmarks spent all session flipping between gains and losses as investors looked beyond U.S.-China trade talks for further catalysts to trade on.

How did indexes fare?

Trading was somewhat subdued as investors awaited more concrete developments following reports that U.S. and Chinese negotiators were close to completing a trade deal although strategists believe the news has been largely reflected in prices by now.

China on Tuesday lowered its economic growth target for 2019 to between 6% and 6.5%, acknowledging a deepening slowdown. Premier Li Keqiang, at the opening of the annual session of China’s legislature, outlined plans to support the economy, including an increase in deficit spending, new tax cuts, lowering fees for businesses, and a 30% boost in bank lending to small and private companies.

Which economic data and Fed speakers were in spotlight?

Boston Fed President Eric Rosengren said in a speech Tuesday morning that his “earlier concerns that the economy might overheat…seem somewhat less concerning at this juncture,” while predicting that U.S. growth would slow modestly this year, though still above its long-run potential growth rate.

Markit said its purchasing managers index for the U.S. services sector registered a final reading of 56.0 in February, up from 54.2 in January and largely in line with an earlier “flash” estimate of 56.2. A reading of more than 50 indicates growth in activity.

New-home sales ran at a seasonally adjusted annual 621,000 rate in December, down 2.4% from a year ago, the Commerce Department said.

“Generally speaking the markets are relatively quiet on volume that is about 17% less than average, digesting [recent] gains, attempting to find a catalyst for either direction. It appears all are watching the pivotal 2,800 level on the S&P 500 that has capped advances for several months,” said Kent Engelke, chief economic strategist at Capitol Securities Management.

“This week has been about waiting for more details on China negotiations. Any thing that lifts the threats of additional tariffs will be a relief to the market, but much of this has already been priced in,” said James Ragan, head of wealth management research at D.A. Davidson.

“I see limited upside in the near term because earnings growth picture has certainly weakened. Looks like we’ll have negative earnings growth in the first quarter, with growth returning in the second. Interest rates are low by historical standards, but it’s tough to see a surge from here given what we know about earnings and that bond yields have inched up in recent days,” he said.

Shares of GameStop Corp. GME, +0.17% rose 0.3% after the videogame retailer late Monday announced a new stock buyback program of up to $300 million and retired $350 million in notes due this year.

Shares of retailer L Brands LB, +0.41% climbed 0.5% after The Wall Street Journal reported that activist investor Barington Capital Group LP had built up a position in the stock and planned to urge the company to split its fast-growing Bath & Body Works brand from its struggling Victoria’s Secret operation.

Kohl’s Corp. KSS, +7.31% shares jumped 7.3% after the retailer reported a surprise jump in same-store sales, while raising its dividend by nearly 10%.