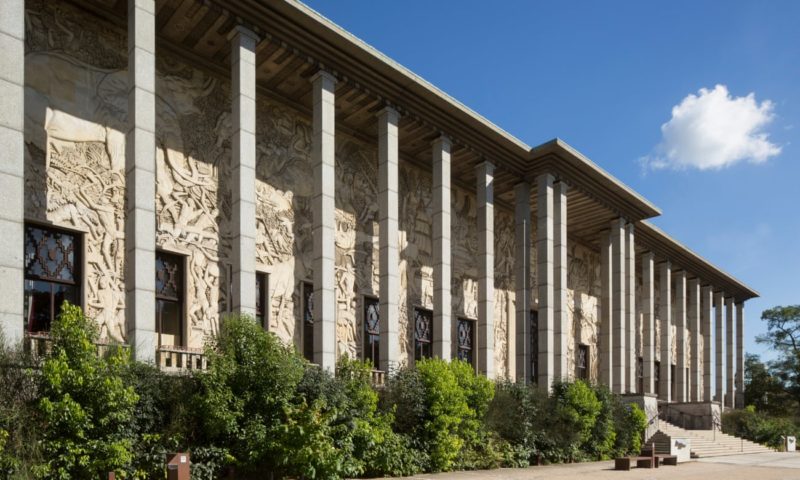 As European elections near, Rome’s populists are advancing a pointed narrative that firmly blames the Elysée for migration

The ornate, sculpted facade of Paris’s Palais de la Porte Dorée is a majestic allegory: at its centre is France, symbolising peace, prosperity and abundance, surrounded by her “possessions”, the colonies, offering up their riches.

Today the magnificent art deco palace, built for the 1931 Colonial Exhibition, houses the History of Immigration Museum, a popular venue for school visits. Its director, Hélène Orain, says the museum is a vital reminder of France’s colonial past. “We have a duty to remember. We must say what we did, take responsibility for what was done, including the pillaging and abuses. Our role is to show how we changed the destinies of the countries and continents we colonised.”

For the students queueing outside the museum on a bitterly cold morning last week, the news headlines made their visit particularly pertinent. In an undiplomatic outburst, Italy’s deputy prime minister, Luigi di Maio, had blamed France for forcing poor African migrants to flee their countries by running them as de facto colonies.

“France has never stopped colonising tens of African states,” said Di Maio, leader of the populist Five Star Movement. “The EU should sanction France, and all countries like France, that impoverish Africa and make these people leave, because Africans should be in Africa, not at the bottom of the Mediterranean.”

His comments came after two boats carrying migrants sank, one off the coast of Libya and a second in the Mediterranean, drowning an estimated 170 people.

Quick to put the boot into Emmanuel Macron ahead of May’s European elections, Matteo Salvini, head of the far-right League party and Italy’s other deputy prime minister, said France had a “very bad government and president”. The language was hostile and on a subject always guaranteed to raise hackles in France: colonialism.

During the 2017 presidential election campaign, Macron caused the French right to hyperventilate after describing colonialism as a “crime against humanity” during a trip to a former colony, Algeria. Historian Gilles Manceron noted at the time that colonialism continued to haunt the collective French memory. “It’s an embarrassing question”, he wrote, that prompts “a form of denial” as well as “nostalgia in certain regions”.

But Di Maio went further than what L’Express magazine called “French bashing … à l’Italienne” and accused France of manipulating the economies of African countries that use the CFA franc as their currency, stifling their development.

The CFA franc – made up of two distinct but interchangeable currencies – is used in 14 central and west African countries. It is pegged to the euro at a fixed exchange rate and is guaranteed by the French treasury. To its proponents, it offers stability and control over inflation for the poorer nations that use it; to its critics, it is a symbol of French imperialism that hampers growth.

Patrick Smith of the Africa Report, an English-language magazine focusing on African economies and politics, said: “There are advantages for some and disadvantages for others, and individual countries have to assess it for themselves.”

Roland Marchal, an Africa specialist at the Paris-based National Centre for Scientific Research, agreed. “We can criticise France, and I often do, but Italy seems to be forgetting how it behaves in its former colonies, like Libya.

“Having the CFA is voluntary, so it’s for African economists to decide; it might be good for some countries and not for others.” He said Di Maio’s and Salvini’s comments were “utterly risible”.

At the heart of the ongoing Franco-Italian row, however, are the migrants themselves. Since the Five Star and League parties came to power in Rome last June, France and Italy, both hampered by the absence of a unified EU policy on mass migration, have been squabbling over where the thousands of desperate people saved in the Mediterranean should go.

Macron accused Italy, which has closed its ports to rescue vessels, of being “inhumane”. Rome accused Paris of “hypocrisy” after France tightened security along the French-Italian border to halt migrant crossings and refused to allow the migrant rescue ship Aquarius to dock at Marseille last September.

Smith said Di Maio’s and Salvini’s recent comments were just rhetoric. “They’re trying to keep up the pressure over migration, and Macron is an easy target,” he said. “When we look at the origin of the migrants in this latest wave, we see very few from CFA-zone countries.”

He added: “Europe’s relationship with Africa is dysfunctional for many reasons, but that’s down to all 28 countries, not just France.”

At the museum, Orain points out what some in the Italian government appear to have forgotten: that around 24 million Italians emigrated in the 19th and 20th centuries, many to France. “During that period Italy was a poor country and there was a massive wave of emigration … you can go to the end of the world and find Italian communities there,” she said.

And she thinks France should be more welcoming to those who seek to make a life in the country. “For a long time we wanted people from our colonies to come to France: we asked them to come here and used them in manufacturing, mining, textiles and as soldiers who were excellent cannon fodder in our wars.

“This story was never told. When people spoke about the ‘real France’ they talked about villages, the curé, the town hall, the church bells, the fields … They forgot that from a very early time there were immigrants working in those fields.

“We pillaged our colonies for human resources, and that was not positive. What we try to show here in the museum is how immigration has been positive for France and its history.”

Venezuelans cry out for change – but they dread foreign intervention