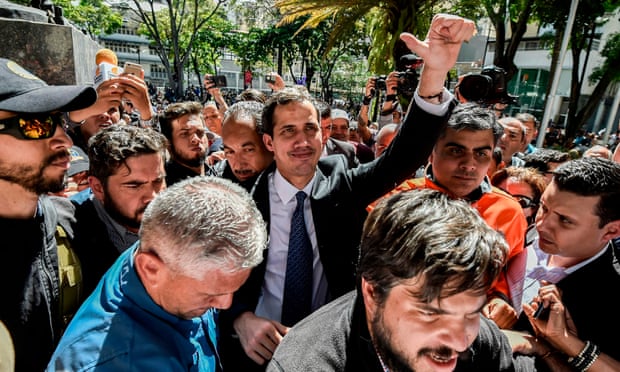 It was Friday lunchtime in Venezuela’s crumbling capital and Omar Mejías – for years a disciple of the comandante Hugo Chávez – had come to a plaza in the city’s east for what he hoped might be a glimpse of a brighter future.

On stage before him stood Juan Guaidó, a fresh-faced and until recently little-known politician, catapulted into the spotlight last week by the decision of the United States – and then a succession of other world powers – to recognise him, and not the incumbent Nicolás Maduro, as the legitimate president of this oil-rich but economically ravaged South American nation.

“I’m here to see what this señor has to say, what proposals he has … because things aren’t easy,” said Mejías, 53, a resident of Valles del Tuy, a traditional Chavista stronghold in south Caracas, who was considering transferring his loyalties because of his country’s collapse under Maduro. Borrowing one of the comandante’s famous expressions to describe Venezuela’s disintegration, Mejías added: “You don’t need glasses to see what’s right before your eyes.”

As Venezuelans confronted the latest political upheaval to engulf their nation last week, there was widespread consensus on the capital’s streets that change was urgently needed – and possibly on the horizon.

“We must have change. We’re tired of seeing children eating in the rubbish,” said Luis Torres, 34, an unemployed father-of-two from Petare, a sprawling shanty in the city’s east.

But as your correspondent moved around Caracas on Friday, unease and frustration could be seen, and deep trepidation over what is now a profoundly uncertain future.

“I want a change – but not through a coup or an intervention,” said Naikary Agresot, 17, a student from Gramoven, a working-class and heavily pro-Chávez community in west Caracas. “I wish Maduro could understand that things have gotten out of control and make room for someone who truly can change the country,” added Agresot, who said she often lacked the money to take the bus to school or buy food.

“I think he’s had his chance and he didn’t know how to take advantage of it,” she said of Maduro, who was first elected after Chávez died in 2013 and re-elected last May in elections widely denounced as a farce. “It isn’t fair that someone works for a whole month and has to spend half their salary on a kilo of rice or meat.”

Torres was among those who took to the streets last week to support Guaidó and said there were thousands of other slum-dwellers who also wanted Maduro gone. “Here the prices are like in Switzerland, but you earn like you’re in Haiti,” he said.

However, while he was desperate for “freedom” Torres was alarmed at the prospect of a foreign military intervention to oust Maduro and hoped a peaceful way out could be found. The US has warned that “all options are on the table” if Maduro responds to Guaidó’s challenge with violence, while Maduro ordered his troops to prepare to defeat “any imperialist enemy who dares touch our soil”.

“If there’s no food now, just imagine what it would be like in a war … we’ve seen what happened in Syria and Libya and we do not want this,” Torres said.

Opposition to Maduro – who claims Guaidó’s move is part of a US-sponsored “coup” similar to the botched 2002 attempt to topple his mentor – was everywhere. But there was support, too. “I want to give him another chance,” said Yenny Cumana, a 32-year-old housewife from 24 de Julio, a community in Petare that was rocked by protests last week.

“I want to believe and I want things to improve so the country goes back to being like it was.”

Addressing a sea of supporters in Plaza Bolívar de Chacao on Friday, Guaidó rejected claims that he was involved in a coup and said his movement had identified “a clear path” out of Venezuela’s current nightmare: Maduro’s exit, the installation of a transitional government, and free and fair elections. On Saturday the leaders of Britain, France, Germany and Spain gave Maduro an eight-day ultimatum to call a vote or they would back his challenger.

But with Maduro refusing to budge and China and Russia backing his administration, Venezuela’s fate is shrouded in uncertainty. Many see the potential for violence, civil war or even a catastrophic cold war-style clash between the US, China and Russia if a peaceful resolution is not found. “I don’t think anyone can predict what is going to happen,” said Moisés Naím, a Venezuelan scholar who was the country’s trade minister during the 1990s.

Naím, a vocal critic of Chavismo, said he was encouraged by recent developments, calling them the opposition’s first bit of good news since Chávez launched his ill-fated Bolivarian revolution two decades ago. “There are reasons to celebrate. The opposition has done a wonderful job of acting in a coherent and coordinated way. The international community … has rallied in very significant ways. [Last week’s] marches and demonstrations included everyone. It was no longer just the [wealthy] east of Caracas protesting. It was the barrios. Everyone was in the streets showing opposition to Maduro.”

But Naím was also troubled by the potential for bloodshed if different military factions started backing different leaders. “I am worried about a country that can fragment under different chieftains and warlords and generals and narco-traffickers [and guerrilla groups] and … Venezuela becoming like a tapestry of different power centres.” So great are the uncertainties it is unclear even where Guaidó might seek to set up his parallel government if Maduro – who also has the backing of Venezuela’s military top brass – hangs on. Naím said he could imagine a situation where Caracas was politically partitioned, with Maduro in the Miraflores presidential palace and Guaidó having his headquarters in the leafy eastern district of Altamira. “It could be as granular as that,” he said.

“Venezuela could evolve towards a Lebanon circa 1985 … [when] after the war it fragmented and each neighbourhood had its own militia with its own head and you needed permits to move across the neighbourhoods.”

Mejías, who had never attended a political rally before Friday’s, said he hoped Venezuela’s military would step in to broker a solution that would avoid a “gringo” intervention and a bloodbath. “If we are here and there’s an invasion, they’ll fill everyone with lead, whether you’re a Chavista or from the opposition.”

As Venezuela lurches towards a new, unsettled future, Mejías hoped that better times were coming “and we can go back to being what we were before”.

“We can’t be pessimistic,” he insisted as the crowds poured into the square to hear from a man some hope will prove Venezuela’s saviour. “We must have faith.”

Germany agrees to end reliance on coal stations by 2038