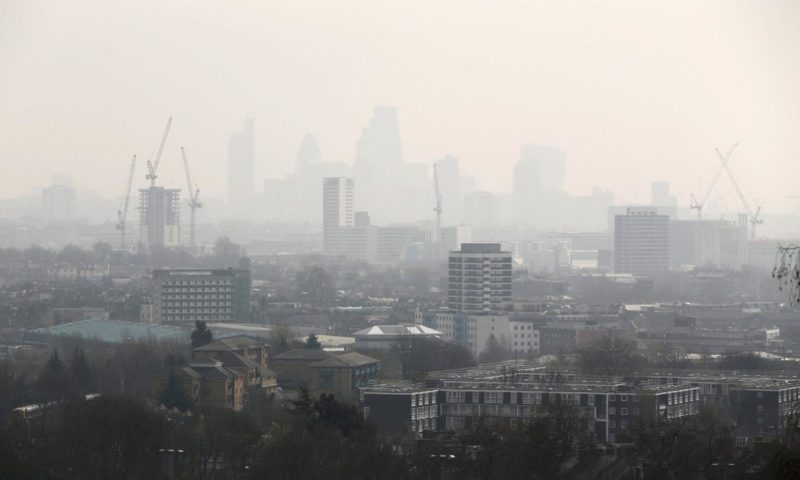 Scientists have long known that breathing dirty air can be bad for your health, including your brain health.

Now, a study, published in the medical journal BMJ Open on Tuesday, weighs just how much exposure to high amounts of air and noise pollution could be linked with an increased risk of dementia.

Specifically, those in the top fifth areas of exposure “were 40% more likely to be diagnosed with dementia in the study” than those in the bottom fifth, even after adjusting for other risk factors like smoking or socioeconomic status, said Iain Carey, a senior lecturer of epidemiology in the Population Health Research Institute at St. George’s University of London, who was lead author of the paper.

“While the findings need to be treated with caution, the study is an important addition to the growing evidence for a possible link between traffic pollution and dementia,” Carey said.

The study “should encourage further research to investigate this,” he added.

Dementia is the seventh leading cause of death in the world, according to the World Health Organization. The syndrome involves the loss of cognitive functioning and behavioral abilities, and Alzheimer’s disease is the most common cause of dementia in older adults.

Next, the researchers took a close look at dementia diagnoses between 2005 and 2013 among a sample of 130,978 adults, 50 to 79 years old, whose various primary care practices and residential postcodes were within greater London.

During the study, a total of 2,181 adults or 1.7% received a first-time diagnosis of dementia. Anonymous electronic health records for the adults came from a governmental, not-for-profit service called the Clinical Practice Research Datalink.

Using their models, the researchers then estimated how much traffic noise and air pollutants — such as nitrogen dioxide, which forms from emissions from vehicles and power plants, and fine particulate matter, a complex mixture of small particles and liquid droplets — each adult would have been exposed to annually. The researchers ranked each adult’s postcode into fifths, based on which areas had the highest and lowest air and noise pollution.

After analyzing the air pollution and noise models along with the health records, the researchers found that patients with an annual exposure of nitrogen dioxide in the top fifth of exposure had a marked increase in risk compared with those in the bottom fifth.

Even when independent risk factors for dementia — such as hypertension or obesity — were taken into account, this association remained.

“We were surprised to find a potential link with dementia. However, other recent findings, notably a large study in Canada, have started to report a possible effect with living close to major roads,” Carey said.

The new study had some limitations. “The main limitations of the study concern exposure uncertainty where we assume that traffic pollution levels at somebody’s address can adequately represent their long-term exposure. There are also valid concerns about the under-diagnosing of dementia on electronic patient records,” Carey said.

The study was conducted only in London. So more research is needed to determine whether similar findings could emerge in other regions globally.

Overall, the study adds to a growing body of research investigating this potential link between air pollution and dementia.

Similar findings in the US, Canada, and China

“This is probably the sixth or seventh serious regional study of air pollution and cognition that has been published in the last three years,” said Caleb Finch, a leading expert on Alzheimer’s disease and a professor at the University of Southern California’s Leonard Davis School of Gerontology in Los Angeles.

Finch, who was not involved in the study, said the findings align with separate research that has explored associations between air pollution and aging.

“They have a large population. Their findings are extremely carefully analyzed and are in complete agreement with the general conclusion whether it’s the United States, whether it’s Ontario, Canada, which is another study, or whether it’s China,” he said.

Finch co-led a study, published last year in the journal Translational Psychiatry, that found a link between exposure to airborne particulate matter and cognitive impairment in older women.

That study involved analyzing data on 3,647 women, between 65 and 79 years old, across 48 states. The study also involved conducted experiments in animals.

In that study, the researchers found that residing in places with fine particular matter that exceeds EPA standards was associated with an increased risk for global cognitive decline and all-cause dementia, respectively by 81% and 92%.

Another study, published last month in the Proceedings of the National Academy of Sciences, found that long-term exposure to air pollution in China can impede cognitive performance in verbal and math tests.

For that study, researchers examined data from the national China Family Panel Studies longitudinal survey, mapping the cognitive test scores of nearly 32,000 people over the age of 10 between 2010 and 2014 against their exposure to short- and long-term air pollution.

Those researchers found that both verbal and math scores “decreased with increasing cumulative air pollution exposure,” with the decline in verbal scores being particularly pronounced among older, less-educated men.

What’s behind the pollution and dementia link?

In general, more research is needed to determine what could be driving the link between environmental factors such as air pollution and dementia risk and whether there could be a causal relationship, said Dr. Thomas Wisniewski, director of the Center for Cognitive Neurology at NYU Langone Health in New York, who was not involved in the new study.

“It’s merely a very intriguing association that’s being raised, which is biologically quite plausible, but it’s one that certainly requires further studies in other populations,” Wisniewski said.

As it turns out, Finch’s lab is continuing separate research into the specific mechanisms behind the association between air pollution and dementia, he said.

“My lab and several others are analyzing the mechanisms using rodent models,” Finch said.

“The air pollution in a rodent model under very controlled conditions, increases the production of the toxic peptide A-beta, amyloid beta, which is a fundamental part of Alzheimer’s disease neurodegeneration, and my lab is working out the processes by which subcellular production of that increases in the brain,” he said.

Rooftop farming: why vertical gardening is blooming in Kampala

Pimco to stay away from equities and passive management