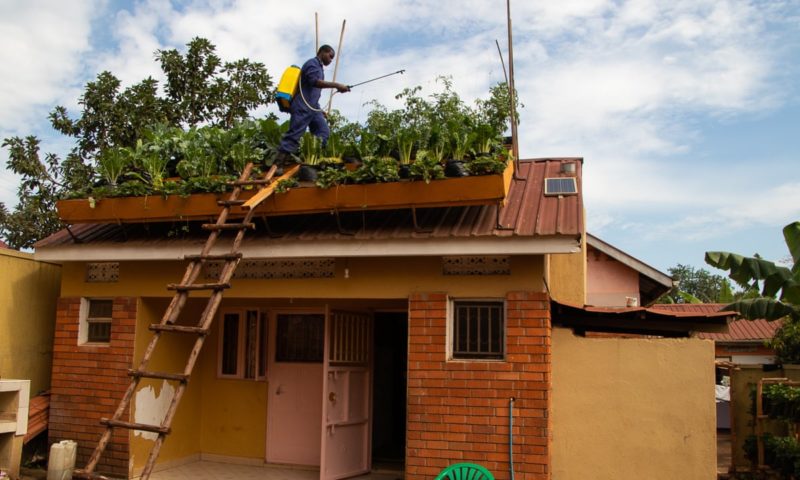 Ugandans are finding creative solutions to the growing challenges of urbanisation

When Martin Agaba realised his urban farm had run out of space, he decided the solution was not to expand outwards but upwards.

“We realised we had to use the roof,” he says. Of all the innovations that have galvanised people in his district in the Ugandan capital Kampala to grow their own food, these vertical box plantations remain his favourite.

Kwagala farm, located on half an acre of land, is the brainchild of Diana Nambatya, a professor in public health, who began growing vegetables to save money on food in 2010.

After receiving two cows as a dowry, she decided to use their dung to generate biogas for her home. Her burgeoning urban farm soon attracted the attention of the neighbours, and in 2012 she started training women at a small demonstration centre.

The urban farm is just one of many springing up in and around Kampala, a city of more than 1.5 million people, as residents find creative solutions to the challenges of urbanisation. Between 2002 and 2010, Uganda’s urban population grew by 5.6%. This process, Martin Agaba believes, is eroding young people’s interest in Uganda’s agricultural sector, which employs approximately 69% of the population.

Agaba trains children that live around Kwagala farm in how to grow strawberries, yams and spring onions. “We are motivating children to not rely just on boda bodas (motorcycle taxis – a popular form of informal employment) or TV but to do something creative every day.”

It was Kwagala farm’s creative reuse of old tyres that first attracted visitors. Then, as they began to experiment with using other materials, such as disused drainpipes and milk cartons, some of the local children began to create their own designs. “Now the children do not copy what we do,” says Agaba. “They do their own thing.”

Harriet Nakabaale runs a small farm called Camp Green in the Kawaala area of Kampala. She collects the plastic bottles discarded by her neighbours. By cutting them, she can use them as flowerpots; by perforating them, they can become watering devices. Nothing goes to waste. Even the shells of the eggs produced by her chickens will be used to grow cress.

Kwagala farm has three cows which they feed with banana peel and corn, which is grown using hydroponics, a method of growing plants using a water-based solution instead of soil. Agaba and his colleagues collect the cow dung, which they use to produce fertiliser.

Despite the business potential, there are no plans to expand the farm. “We do not need more than three cows,” says Abaga. “We are teaching people to keep less but to do more with what they have.” An education programme at the farm has trained more than 700 women and young people in urban farming and how to make organic fertiliser and biofuel. Martin Agaba, who works at Kwagala urban farm, says: ‘We don’t keep more than three cows. We teach people to keep fewer and do more with what they have.’

Brian Ndyaguma relies on urban farms in Kampala for a large proportion of his restaurants’ vegetables, herbs and fruits. He sees a business opportunity not just for urban dwellers but rural farmers as well. “We still have a big advantage here in Uganda because we have good soil, so food is largely available. The challenge is the distribution.”

Congestion, lack of refrigerated trucks and long hot days in the markets can make it difficult for the food grown outside of the city to stay fresh. “Urban farming gives rural farmers with more space the opportunity to concentrate on perennial crops, like corn or cereal,” he says.

Agaba is an engineer and, like most of the people working on the farm, he has a day job, choosing to work at the farm as a pastime. Though he doesn’t sell much of what he grows, he still recognises there are financial benefits to his hobby. “Growing your own food makes you money by saving you money.”