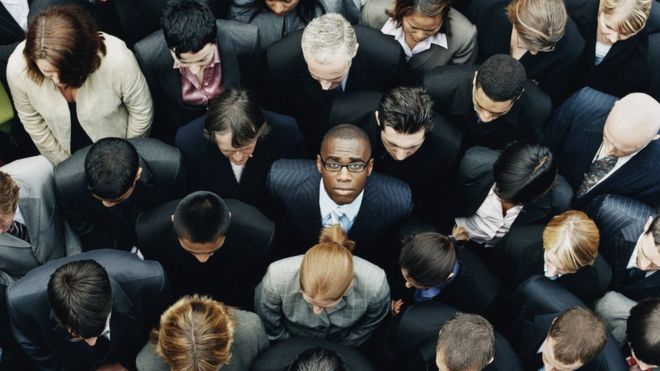 Companies may be forced to reveal their ethnicity pay gap under plans unveiled by the prime minister to help minorities at work.

Theresa May has launched a consultation on whether mandatory reporting will help address disparities between the pay and career prospects of minorities.

She acknowledged that minorities often “feel like they are hitting a brick wall” at work.

The move follows the decision to make firms reveal their gender pay gaps.

Downing Street said the consultation would allow businesses to share views on what information should be published “to allow for decisive action to be taken” while at the same time avoiding “undue burdens on businesses”. It will run until January.

It found that Asian, black and other ethnic groups were disproportionately likely to be on a low income, with just 1% of non-white police officers in senior roles.

Within NHS England, it found that 18% of white job applicants shortlisted got the job, compared with 11% of ethnic minorities.

Mrs May said: “Our focus is now on making sure the UK’s organisations, boardrooms and senior management teams are truly reflective of the workplaces they manage, and the measures we are taking today will help employers identify the actions needed to create a fairer and more diverse workforce.”

Mrs May is also due to unveil a Race at Work Charter signed by firms including accountancy giant KPMG, advertising firm Saatchi & Saatchi, and public sector bodies including NHS England and the Civil Service.

The charter, designed with Business in the Community, commits signatories to increasing recruitment and career progression of ethnic minority employees.

The prime minister said: “Every employee deserves the opportunity to progress and fulfil their potential in their chosen field, regardless of which background they are from, but too often ethnic minority employees feel they’re hitting a brick wall when it comes to career progression.”

The consultation was welcomed by the CBI employers’ group. Matthew Fell, chief UK policy director, said: “Transparency can be a catalyst for action in tackling the ethnicity pay gap, in the same way that it has been so successful for gender.”

The Equality and Human Rights Commission also supported it, with its chairman David Isaac saying: “Extending mandatory reporting beyond gender will… give employers the insight they need to identify and remove barriers to ethnic minority staff joining and progressing to the highest level in their organisations.”