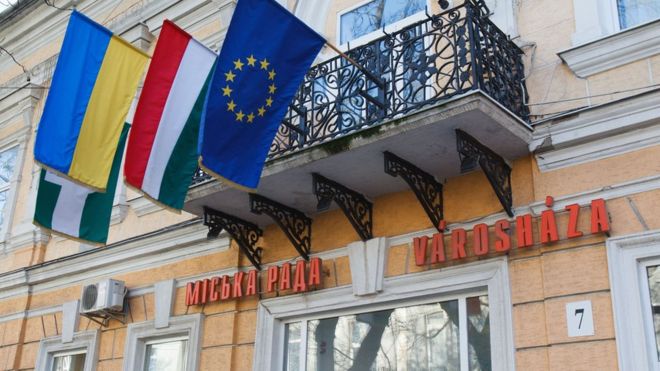 Ukraine and Hungary are expelling diplomats from each other’s nations in a row over Budapest issuing Hungarian passports to Ukrainian citizens.

In the footage, the recipients are asked to keep this secret. Ukraine does not allow dual citizenship.

In a tit-for-tat response, Hungary said it would expel a Ukrainian consul.

This is the latest in a series of spats between the two neighbouring countries.

Last year, Hungary protested over a law that limits the teaching of subjects in languages of Ukraine’s ethnic minorities, including Hungarian.

What are Kiev and Budapest accusing each other of?

In a statement, Ukraine’s foreign ministry declared the Hungarian consul – who was not named – persona non grata due to “the activity incompatible with consular status” in Berehove, western Ukraine.

“In future, we expect Hungary to refrain from any unfriendly steps towards Ukraine and its officials from violating Ukrainian legislation,” it said.

In response, Hungarian Foreign Minister Peter Szijjarto said Ukraine’s ambassador in Hungary was summoned and told that “a consul working at the Ukrainian embassy in Budapest would have to leave Hungary within 72 hours”.

Hungary – a Nato and EU member – has in recent months been blocking Ukraine’s attempts to integrate with both organisations.

Hungarians are the largest ethnic minority in Transcarpathia – a region that was once part of the Austro-Hungarian Empire.