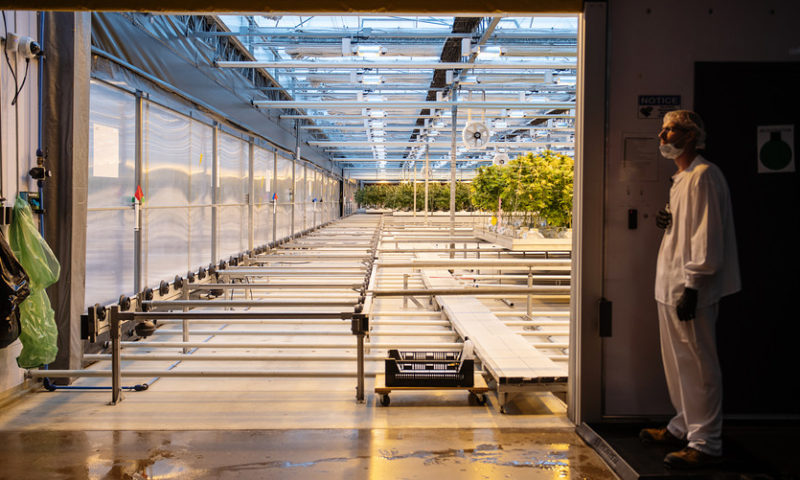 CannTrust sold C$500,000 worth of recreational pot in third quarter, as much as Aurora, and says it is pursuing a listing on NYSE

CannTrust Holdings Inc. said late Wednesday that it sold nearly as much recreational pot in September as Canadian cannabis rivals worth much more, and it is pursuing a listing on the New York Stock Exchange.

The Vaughan, Ontario-based cannabis producer’s third-quarter earnings showed sales of C$500,000 in recreational pot, positioning it alongside large rivals with deep pockets such as Canopy Growth Corp. CGC, -10.86% , WEED, -11.30% in the race to dominate the recreational-pot market that Canada kicked off less than a month ago. CannTrust CNTTF, -6.81% TRST, -7.79% experienced early issues with supplying Canada’s recreational market with pot like other pot producers, but it was able to ship as much recreational weed as Aurora Cannabis Inc. ACB, -8.06% ACB, -6.64% , which said Monday it moved about $500,000 of recreational product. Canopy sold roughly $700,000 worth of “test shipments” to provincial retailers.

“The first month was very exciting, and we were very pleased with demand and what we experienced with brands and products,” CannTrust Chief Executive Peter Aceto said in a conference call Wednesday afternoon. “We did experience issues in terms of the supply chain. Some of the external labs we had expected turnaround times in the 10 days range, and turnaround times were in the 40 day ranges … We were expecting in this brand new venture to adapt and learn things along the way.”

CannTrust reported third-quarter net income of C$421,240, or less than a penny a share, compared with profits of C$655,309, a penny a share, in the year-ago period. Revenue more than doubled to C$12.6 million, from C$6.1 million in the year-ago period. The company said it sold 266 kilograms worth of wholesale weed, and 699 kilograms of dried medical cannabis equivalents; the average net selling price per gram was C$8.37. Executives said CannTrust currently has the capacity to grow 50,000 kilograms of pot a year, and by fall 2019 expects to grow twice that.

CannTrust also has a range of international operations, and said it shipped roughly C$200,000 worth of weed outside Canada. The vast majority of CannTrust’s revenue was from medical cannabis sales in Canada.

In the conference call, CannTrust executives said its best-selling strain was “Kinky Kush” under its Liiv brand, and that it had received good feedback and strong reviews on social media. Aceto did not go into detail about pricing or demand from early recreational sales, saying that it was too early in adult recreational use to be offering useful data.

Like Canopy, Tilray Inc. TLRY, -8.26% and other suppliers, CannTrust executives also brought up the labeling issue that had plagued early shipments. Canopy CEO Bruce Linton said in a conference call that his company had trouble getting the excise tax stamps required by the Cannabis Act to stick to product packages. Linton’s complaint echoed a comment Tilray CEO Brendan Kennedy told MarketWatch in October — saying then that there was only one supplier of the glue necessary to make the stamps work properly.

Aceto said that CannTrust was continuing to work on the labeling issue and it was not exactly where it wanted to be, but there were frequent improvements.

All of those producers are worth much more than CannTrust. So is Green Organic Dutchman Holdings Ltd. TGOD, -3.86% , which also reported earnings this week and has not sold any marijuana to this point. Green Organic Dutchman has a market value of $682 million versus CannTrust’s market valuation of $623 million, according to FactSet, while Tilray is worth $10.39 billion and Canopy has a market cap of $8.84 billion.

CannTrust did not provide a timeline for its NYSE listing.