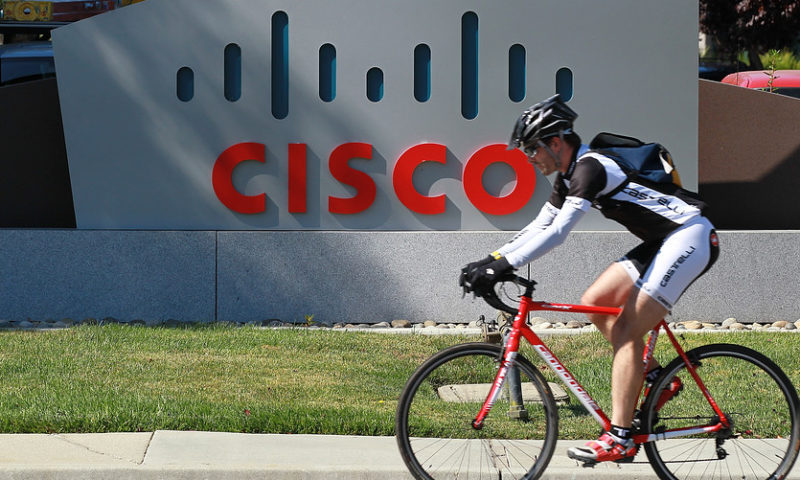 But more tariffs in January could be ‘bad for everybody’

Bearish investors have had a list of concerns about Cisco Systems Inc., but on Wednesday, the networking giant seemed to tick off many items on those lists and knock them down, one by one.

Earlier, Cisco CSCO, -1.75% reported better-than-expected results for its fiscal first quarter, buoyed by strong product sales across the board and all geographies. Its shares jumped 5% in after-hours trading Wednesday, while the Dow Jones Industrial Average DJIA, -0.81% and the S&P 500 Index SPX, -0.76% SPX, -0.76% SPX, -0.76% , both of which include Cisco as a component, closed off about 0.8%.

For Cisco, four issues are now morphing from big negatives to possible benefits: the cloud, memory-chip prices, the macro economy and tariffs. While tariffs are not good for anyone in tech, the company will likely raise prices on affected products, though they don’t represent a big problem yet.

One large, overriding fear has been that cloud computing would continue to wreak havoc on Cisco’s sales of networking gear to companies with large internal networks and data centers, if those customers decide to move much of that data to a public cloud hosted by companies like Amazon.com Inc.’s AMZN, -1.97% AWS or Microsoft Corp.’s MSFT, -1.42% Azure.

Over the past year, Cisco has returned to single-digit revenue growth, after two years of declining revenue. A big part of its rebound has come from the launch in May 2017 of a software-based networking product family, with a subscription model centered around the Catalyst 9000 switching platform.

“People are expanding in cloud, they have work loads they run on premises, their employees use all kinds of services,” Kelly Kramer, Cisco’s chief financial officer, told MarketWatch in an interview. “We can differentiate ourselves by helping them manage, automate that, connect to all of that securely.” Indeed, Cisco saw total revenue growth of 8% in the quarter, with product revenue up 9% and growth in all its geographies.

Other worries weighing on the company have included the high cost of memory chips, the overall macro-economic environment and the impact of the tariffs on Chinese goods. Kramer said that the prices of memory chip are coming down, and what was once a headwind of its financial results will become a tailwind, starting in the third and fourth quarters.

“I still see headwinds this year, but then I will get into a cost savings in third quarter, fourth quarter that will help offset some of the tariff costs in Q3 or Q4,” Kramer said. Tariffs on a large number of tech goods made or assembled in China are expected to jump to 25% in January, as part of the Trump administration’s trade dispute with China. The tariffs, Kramer added, are not good for anyone.

“If tariffs do go to 25% that will be bad for everybody,” Kramer said. “That won’t be good for overall demand and for pricing. That is not going to help the overall environment.” Cisco plans to build in the costs of the tariffs to its product pricing structure, but higher prices could affect overall demand.

For years, Cisco has been seen as either a gauge of the overall economy or of general IT demand. CEO Chuck Robbins was asked on Wednesday’s conference call about the current disconnect between Cisco’s stronger results and positive outlook, with signs that some emerging economies are slowing down.

“The question that I’ve been asked the last two calls, which is how much of this is macro and how much of it is your own execution?” Robbins said. “When we begin to perform differently than what’s perceived to be in the macro, I think that’ll give us insight into how much of it is our execution, our innovation.”

Kramer said in an interview that Cisco has always been thought of as a “GDP stock.” “Perhaps because of the great portfolio of innovative products, we are starting to decouple from how people think of us associated with the macro economy.” In addition, she said that some of the features of Cisco’s products, such as its automated security systems, can help companies lower their IT costs.

Whether that holds true in a major economic downturn will be a big test of this theory, but for now investors seem to be happy that Cisco is focused on controlling its own destiny.

CannTrust makes its case as a major Canadian weed producer