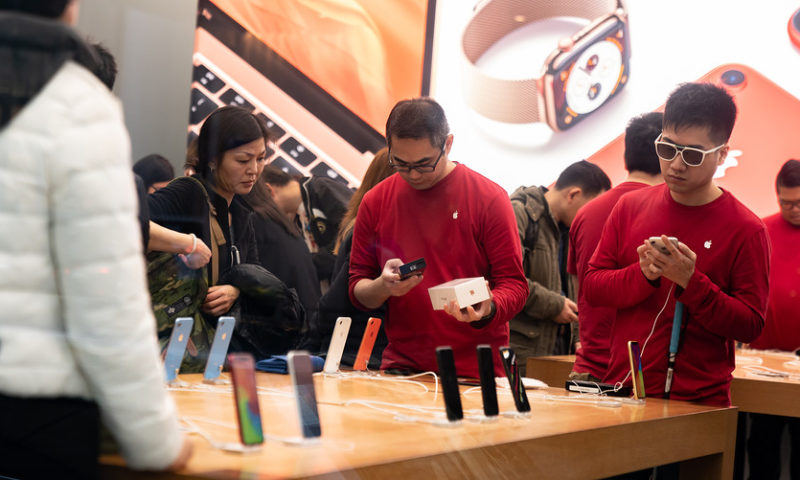 Carnage for stocks and other financial markets has investors shouting — or at least whispering — the dreaded “R” word.

It isn’t clear that investors are pricing in a recession, but it’s obvious that they now see a sizable risk for a substantial slowdown, notes Ben May, director of global macro research at Oxford Economics.

For certain, high-risk events keep coming down the line. Stocks opened with solid gains, taking back a big chunk of the previous day’s steep selloff, after stronger-than-expected jobs report on Friday.

Earlier, sentiment was boosted after China confirmed trade talks with the U.S. would resume early next week. An appearance later Friday morning by Federal Reserve Chairman Jerome Powell was also expected to set the tone.

Oxford’s May, who has our call of the day, is looking at the market damage with a skeptical eye, however. He argued in a Friday note that recent moves are an overreaction to recent events.

Markets have certainly reacted. A round of weak manufacturing survey data out of China (although a service sector reading Friday was improved), the eurozone and the U.S. on Thursday sent stocks plunging, leaving Wall Street with the worst start to a year since 2000 as Apple AAPL, +4.27%  notched its worst day since 2013. And that’s coming after the most brutal December for the S&P 500 since 1931.

It’s the rate of change in the economic data, not so much the still-strong readings, that is unnerving investors.
Ben May

May says that while there does appear to be a broad-based loss of momentum, much of the slowdown in gross domestic product across large economies were caused by temporary factors and the many key business survey readings remain at levels still consistent with solid, albeit slower growth. For its part, Oxford Economics sees global GDP growth slowing to 2.7% in 2019 from 3% in 2018.

May has some sympathy for investors, noting that for market participants, the concern is more about the change in the rate of change in data rather than outright levels. Cue the reaction to Thursday’s sharp fall in the U.S. manufacturing index from ISM, which was the largest since October 2008.

But May isn’t convinced the loss of momentum in U.S. and Chinese data will be worse than the firm is assuming in its baseline. And rather than being a cause for alarm, such managed slowdowns are actually necessary, he said, to reduce the risk of building the sort of instabilities that could amplify the risk of recession in the future. He also has faith that Chinese policy makers can still support growth while trying not to “overdo it.”

As for a negative wealth effect from market turmoil, May’s view is that the weakness seen in 2018 will probably have only a “moderate negative impact” on growth by advanced economies this year. Markets will need to suffer more damage this year for there to be a material impact, he says.

The December jobs report showed the U.S. labor market remains robust, with nonfarm payrolls jumping 312,000 and far exceeding expectations for an increase of 182,000. But MarketWatch’s Rex Nutting reminds that a strong jobs report shouldn’t necessarily in itself put recession fears at bay given the data’s status as a coincident, rather than a leading, indicator:

Earlier, bullish market sentiment was bolstered after the People’s Bank of China delivered a cut in banks’ reserve-requirement ratios, or the amount of deposits lenders must park with the central bank. It’s the fifth move in a year, meant to head off the economic slowing that many are worried is gripping the world’s second-largest economy.

And trade issues came roaring back into play after the holiday lull. China’s Commerce Ministry, in a statement, confirmed that a delegation of U.S. trade officials would meet with their Chinese counterparts Monday and Tuesday, news reports said, marking the first time the two sides have met since President Donald Trump and Chinese leader Xi Jinping agreed to a 90-day trade truce last month.

Powell is set to take part in a panel discussion alongside his predecessors Janet Yellen and Ben Bernanke at an event in Atlanta at 10:15 a.m. Eastern time. The employment report is expected to show the U.S. economy added 182,000 new jobs in December, according to a MarketWatch survey of economists.

Shares of Apple, which fell nearly 10% Thursday in reaction to a China-linked sales warning, were up 1.9% Friday.

Japanese markets NIK, -2.26% tumbled Friday as they reopened after the New Year holidays, while other Asian indexes were mixed after a technology-led selloff on Wall Street. European markets gained after suffering an Apple-prompted tumble.

Get to the airport early: Government shutdown could double security lines as TSA agents call out sick

Bitcoin on track for 10th consecutive session below $4,000