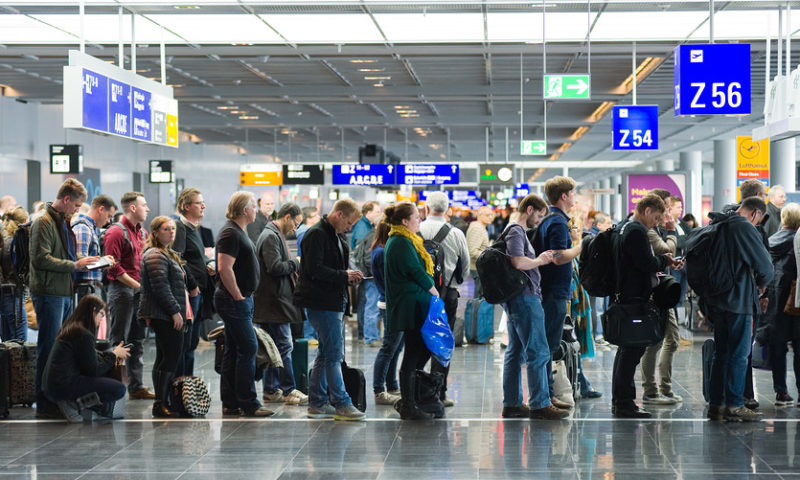 When AJ Johnson, a teacher in the United Arab Emirates, arrived at the Dallas/Fort Worth International Airport for his flight to Dubai on Thursday, he was greeted with what he described as “a mess.” He has flown out of the airport before but hadn’t seen such a crowd.

“The lines were exceptionally longer than normal, especially for a peak departure time frame of 8 a.m. to 12:30 p.m.,” he said, adding that only two of three security lines in the terminal were staffed.

A spokeswoman for DFW said the airport is running “with normal operations” and she could not comment on the state of Transportation Security Administration (TSA) lines specifically. She said airport data shows 90% of passengers get through security in 14 minutes or less, on average. But the number of agents calling out sick at the airport has increased by 200-300%, CNN reported on Friday.

Throughout the country, other passengers similarly tweeted complaints about long TSA lines in recent days. TSA agents been working without pay since the government shut down on Dec. 21 with no end in sight — and that could lead to travel delays for air passengers, said Christopher R. Bidwell senior vice president for security at Airports Council International, a non-profit representing airport owners and operators in the U.S. and Canada.

“TSA has done a commendable job providing security despite the shutdown,” he said. “We have not seen significant increases on wait times on a national level, but we are concerned a prolonged government shutdown could affect wait times as TSA agents seek other employment.”

‘They are working under tremendous stress while trying to secure our nation. Many of our employees are single parents.’
—TSA employee Hydrick Thomas

TSA agents don’t know when they will get their next paycheck, taking a toll on employee morale and creating longer lines for flyers as some employees call in sick, said Hydrick Thomas, a TSA employee and council president of the American Federation of Government Employees, a labor union representing more than 600,000 federal government employees.

“They are working under tremendous stress while trying to secure our nation,” he said. “Many of our employees are single parents. When you aren’t sure if you can feed your children or pay your mortgage, it takes a toll. When you put stress like that on a person, how can you focus on your job?”

Federal employees have limited legal rights to strike and, during shutdowns, law prohibits them from taking vacation.

That means some employees will just refuse to come into work at all, opting to take on other part-time jobs until they are paid again to ensure they can pay rent, Thomas said. The average wait time to get from the end of the line through security is 14 minutes nationally, but Thomas said it is getting closer to 30 minutes with current disruptions.

A TSA spokesman told MarketWatch volume is typically high over the holidays, which could contribute to recent long lines. Delays can also result from equipment challenges, prohibited items being discovered, or other security-related factors can result in longer lines.

“It is true that the lapse in federal funding has made it more difficult for affected federal employees, to include our screening officers,” he said. “They are to be commended. Being charged with fulfilling our mission of protecting the nation’s transportation systems, it is due to their integrity and commitment that we can provide continued service during this partial government shutdown.”

This comes after years of TSA staffing shortages have increased wait times at airports, according to data from the Department of Homeland Security.

Airline compensation company AirHelp declared 2018 “the worst year to fly for travelers” due to over-tourism, delays and poor quality of service from many airlines internationally. An average of 2,400 U.S. travelers experienced flight disruptions every day last year, according to an AirHelp report.

“Our business is to get passengers out on time and we are doing the best we can, but it’s hard to do under all this stress,” Thomas said. “I am just keeping a prayer that the Senate and House comes to some form of resolution so employees can keep doing their jobs to the best of their abilities.”

Why one economist says investors are overreacting to recession whispers