In the last trading week, three major data releases impacted the markets – the July Federal Reserve rate increase, the second-quarter gross domestic product (GDP) reading, and the current second-quarter earnings season focusing on large-cap technology. Market reaction was relatively optimistic despite the data seeming broadly soft since investors have already generally priced in the potential sluggish economic growth. The S&P 500 has already come down by more than 17% and the Nasdaq by almost 24%, already shedding much of the downside risk. Had they not plunged to such levels earlier this year, the markets would have exhibited much more volatility in reaction to this week’s announcements.

All indexes are up for the week, particularly after the release of the much-anticipated negative data. The Dow Jones Industrial Average (DJIA) rose 2.97% for the week, with the total stock market 4.19% higher. The S&P 500 Index gained 4.26% and the Nasdaq Composite, which tracks the technology sector, surged 4.70%. The NYSE Composite index ascended 3.63% week-on-week. All sectors made gains in the week, indicative of a “bad news is good news” dynamic, with growth stocks outperforming value stocks.

All attention was focused on the week’s Federal Open Market Committee (FOMC) meeting that ended with the announcement of a 75-basis-point rate increase on Wednesday. The announcement was generally expected, and thus was quickly discounted by investors, having priced in the restrictive measures in past weeks’ trading. Some softening of spending and manufacturing was noted in the FOMC statement, and Fed Chair Jerome Powell’s post-meeting press conference was mostly interpreted by market participants as more dovish than expected. The stronger-than-expected quarterly earnings reports from Amazon.com and Alphabet resulted in a one-day gain of more than 4% for the Nasdaq Composite Index.

The Commerce Department reported on Thursday that the second-quarter GDP contracted by 0,9% year-on-year. This was much lower than the consensus expectation of an increase of 0.5% to 0.8%.  The negative second-quarter GDP growth marks the second successive quarter of negative growth, the definition of a technical recession. Analysts noted, however, that job growth remained strong, indicating that the current business cycle has not yet turned. It is likely, however, that the U.S. economy is evidently slowing down to below-trend growth levels, and may slow further in the coming months. It should be kept in mind that the second-quarter GDP is backward-looking and has not yet taken into account most of the Fed rate hikes. The rate hikes and quantitative-tightening program adopted by the Feds will likely be felt in the medium term. The more interest-rate sensitive sectors of the economy may exhibit more weakening, such as the housing market which is already showing some softness. Hopefully, the economy may avoid a deep or prolonged recessionary period, given the strong starting position of the labor market and consumers. These factors may provide a cushioning effect against further rising interest rates and a weaker economy ahead.

The gold market appears to be experiencing some bullish momentum. This coincides with the fact that the U.S. economy has technically entered a recession, having contracted the second quarter of negative GDP growth. Despite the controversy among politicians and economists as to whether they are currently in a real recession or not, consumers are beginning to feel the effects of rising interest rates and the unrelenting rising inflation. Data from the U.S. Conference board in the past week showed that consumer confidence for July dropped to its lowest level since February 2021. This pessimism is expected to increase and weigh on further growth. Worse, a Twitter poll in the past week showed that as many as 80% of investors in the metal industry believe that the U.S. is headed for a recession. The recession debate notwithstanding, there is little doubt that the economy is slowing. With increasing inflation comes increased interest in gold as a safe haven asset. However, rising interest rates may cap the gold rally, thus it may be prudent to take some profits should gold prices push to $1,800 per ounce.

Over the past week, the overall sentiment in oil markets has been greatly encouraged by record second-quarter profits posted by companies such as ExxonMobil, Chevron, and Shell. This time, it was due to falling gasoline prices in the U.S., thus saving the companies from accusations that they are making money at the expense of customers. Over the upcoming period, virtually all leading oil majors have indicated that they will either maintain or intensify their share buybacks, resulting in a much-needed surge among oil stocks this week. Together with improving confidence, rumors that the OPEC+ will keep September production targets unchanged have pushed oil prices higher. The front-month ICE Brent contract moved up to $110 per barrel.

Prices rose at most locations this report week. The Henry Hub spot price increased by $1.12 from $7.56 per million British thermal units (MMBtu) at the start of the report week on July 20, 2022, to $8.68/MMBtu at the end of the report week on July 27, 2022. Increases at major pricing hubs ranged from its highest level of $1.15 at PG&E Citygate to its lowest level of $0.28 at the SoCal Citygate in Southern California. International natural gas futures prices rose also during the week. In East Asia, weekly average futures prices for liquefied natural gas (LNG) cargoes rose by $1.85 to a weekly average of $39.96/MMBtu. Natural gas futures for delivery at the Title Transfer Facility (TTF) in the Netherlands, the most liquid natural gas spot market in Europe, rose by $6.04 to a weekly average of $53.64/MMBtu. This is the second-highest weekly average on record behind the $61.08/MMBtu weekly average reported for early March after Russia’s full-scale invasion of Ukraine.

European equities climbed this week on the back of data indicating that the eurozone economy expanded faster than expected, at a rate of 0.7%, in the second quarter. Markets were generally unimpacted by concerns about rising natural gas prices caused by a reduction in Russian supply. The pan-European STOXX Europe 600 Index closed the week higher by 2.96% in local currency terms. Germany’s Xetra DAX Index gained 1.74%, France’s CAC 40 Index ascended 3.73%, and Italy’s FTSE MIB Index surged by 5.63%. The UK’s FTSE 100 Index rose 2.02%. The core eurozone bond yields dipped on rising concerns regarding global growth after Russia diminished its gas supplies into Europe. As the U.S. entered a technical recession, the International Monetary Fund downgraded its global growth forecast. The core markets were broadly tracked by peripheral government bond yields. UK gilt yields likewise tracked core markets but closed the week broadly level.

The Japanese stock markets ended the week slightly lower. The Nikkei 225 Index slid 0.40% while the broader TOPIX Index fell 0.80%. Equities were generally weighed down by a stronger yen, mixed domestic earnings releases, and the downgraded estimates for Japan’s economic growth. Over the week, risk appetite in global markets was propped by tentative expectations that the U.S. Federal Reserve may take measures to slow the pace of its interest rate hikes, seeing how the U.S. economy contracted for two straight quarters. The yen recovered from its recent 24-year lows in light of this development. It treaded six-week highs of around JPY 133 against the U.S. dollar from about JPY 136 one week earlier. The Deputy Governor of the Bank of Japan (BoJ), Masayoshi Amamiya, declared that the BoJ must maintain massive stimulus for the present, although the central bank must anticipate the means available to exit its accommodative policy. Amid fears of a global recession, the yield on the 10-year Japanese government bond dropped to 0.18% from the previous week’s 0.22%.

Chinese equity markets were reassured after a high-level meeting of the ruling Communist Party dropped calls that it will attempt to meet its 2022 growth target, without giving any indication of new stimulus, however. The broad, capitalization-weighted Shanghai Composite Index slid 0.5% and the blue-chip CSI 300 Index, which tracks the largest listed companies in Shanghai and Shenzhen, dipped 1.6%. Analysts reported that statements from the government signaled that it was implicitly abandoning its target growth rate of approximately 5.5% without specifying a new target. On Thursday, the IMF adjusted its full-year growth forecast for China to 3.3% from its April forecast of 4.4% and reduced its 2023 forecast by half a percentage point to 4.6%. The 10-year Chinese government bond yield slid from the prior week’s 2.806% to 2.775%. The yuan was flat against the U.S. dollar, in contrast with other currencies which gained against the greenback during the week.

Among the important economic data expected to be released in the coming week are hourly earnings, unemployment rate, and job openings. 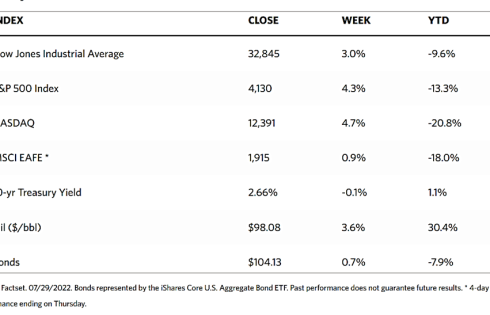 Biopharma begins to hand AI the keys to the research car