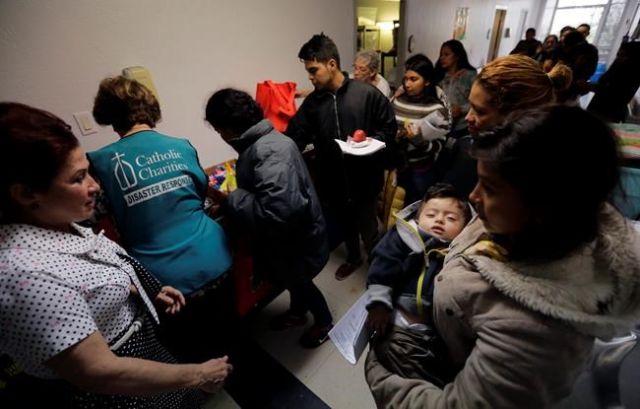 Maria Orbelina Cortez says she fled El Salvador for the U.S. after her husband attacked her and knocked a pan of scalding oil onto her youngest son’s head.

After quietly planning for months, she took the 3-year-old boy and his two brothers and headed north without telling her husband. As she spoke in the yard of a Catholic Charities shelter in South Texas, the boy played nearby. He had a hairless scar on top of his head in the shape of a jagged, capital “T.”

President Donald Trump’s push for a $5.7 billion wall — a demand that triggered the longest government shutdown in history — is unlikely on its own to stop families with stories like Orbelina’s, who are crossing the U.S.-Mexico border by the thousands each month.

The Trump administration wants to use that money to construct more than 200 miles (320 kilometres) of border wall. Most of those miles would likely go in South Texas, where more people cross illegally than anywhere else.

Congress has already funded 33 miles (53 kilometres) of new barrier construction here. But much of that new barrier will be built north of the Rio Grande, which carves a natural boundary between the U.S. and Mexico. That means migrants will still be able to reach American soil in front of the newly constructed barrier and request asylum.

The latest proposal Trump and Senate Republicans made to fund the wall includes provisions that could possibly be far more consequential than the wall, by making the already difficult task of winning asylum even harder.

Their bill would require all asylum claims to be in “the national interest” to be granted and allow more claims to be judged as frivolous. It would also require all Central American children arriving on their own to seek asylum in their countries of origin, not in the United States.

Trump did not describe those provisions in his speech Saturday announcing the proposal. But Greg Chen, director of government relations at the American Immigration Lawyers Association, said they amounted to “a historic change” and criticized the bill. Top Democrats have already said they won’t support it.

Sister Norma Pimentel, executive director of Catholic Charities in the Rio Grande Valley, said the families at the organization’s shelter sometimes resort to crossing the Rio Grande illegally out of desperation after being stopped at bridges.

Centeno said a human smuggler told her crossing the Rio Grande would be easier than trying to enter the U.S. through a bridge, where customs agents often tell asylum seekers they have no room to process them. So she paid $20 each for herself, her teenage daughter, and two children ages 11 and 7, to board a raft. She described how scared she was as it slowly moved across the river.

“In that moment you think about life and death,” she said. “You think, ‘Maybe it would have been better for me not to leave my country.'”

Others refuse to cross the river illegally, insisting they will only seek asylum at an official border crossing. Many of the border crossings in South Texas and elsewhere on the border turn away asylum seekers or accept very few daily, leading families to camp out at the bridges or wait in shelters in Mexico.