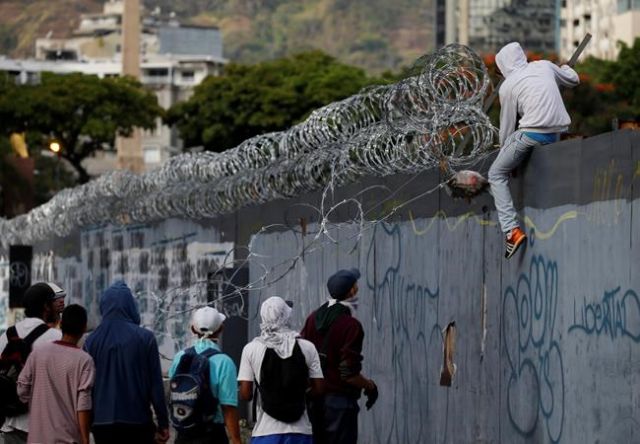 Venezuela’s crisis quickly escalated Wednesday as an opposition leader backed by the Trump administration declared himself interim president in a direct challenge to embattled socialist Nicolas Maduro, who retaliated by breaking off relations with the United States, his biggest trade partner.

For the past two weeks, ever since Maduro took the oath for a second six-year term in the face of widespread international condemnation, the newly invigorated opposition had been preparing for nationwide demonstrations Wednesday coinciding with the anniversary marking the end of Venezuela’s last military dictatorship in 1958.

While Maduro has shown no signs of leaving, his main rival, National Assembly President Juan Guaido, upped the ante by declaring himself interim president before masses of anti-government demonstrators — the only way, he said, to rescue Venezuela from “dictatorship.” Outside the capital, seven demonstrators were killed amid disturbances during protests that rocked several cities.

In a seemingly co-ordinated action, the U.S. led a chorus of Western hemisphere nations, including Canada, Brazil, Argentina and Colombia, that immediately recognized Guaido, with President Donald Trump calling on Maduro to resign and promising to use the “full weight” of the U.S. economic and diplomatic power to push for the restoration of Venezuela’s democracy.

“The people of Venezuela have courageously spoken out against Maduro and his regime and demanded freedom and the rule of law,” Trump said in a statement.

The stunning move, which to some harkened back to dark episodes of heavy-handed U.S. interventions in Latin America during the Cold War, drew a strong rebuke from Maduro. He responded by swiftly cutting off diplomatic relations with the United States, the biggest importer of the OPEC nation’s oil, giving American diplomats 72 hours to leave the country.

“Before the people and nations of the world, and as constitutional president. …. I’ve decided to break diplomatic and political relations with the imperialist U.S. government,” Maduro thundered while holding up a decree banning the diplomats before a crowd of red-shirted supporters gathered at the presidential palace.

“Don’t trust the gringos,” he said, rattling off a long list of U.S.-backed military coups — Guatemala, Chile, Brazil — in decades past. “They don’t have friends or loyalties. They only have interests, guts and the ambition to take Venezuela’s oil, gas and gold.”

Not to be undone, Guaido issued his own statement, urging foreign embassies to disavow Maduro’s orders and keep their diplomats in the country. A few hours later, U.S. Secretary of State Mike Pompeo said the United States would abide by Guaido’s directive and ignore Maduro’s order to withdraw its diplomats.

The 35-year-old Guaido, a virtually unknown lawmaker at the start of the year, has reignited the hopes of Venezuela’s often beleaguered opposition by taking a rebellious tack amid a crushing economic crisis that has forced millions to flee or go hungry.

Raising his right hand in unison with tens of thousands of supporters, the fresh-faced leader of the opposition-controlled congress took a symbolic oath to assume executive powers he says are his right under two articles of Venezuela constitution to take over as interim president and form a transitional government until he calls new elections.

“Today, January 23, 2019, I swear to formally assume the powers of the national executive as president in charge of Venezuela,” he told the cheering crowd as he stood behind a lectern emblazoned with Venezuela’s national coat of arms.

“We know that this will have consequences,” he shouted, moments before quickly slipping away to an unknown location amid speculation he would soon be arrested.