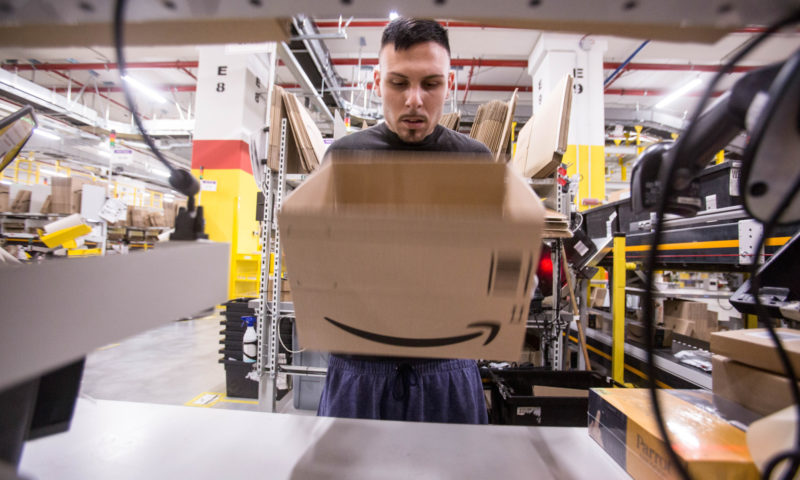 Things are fairly quiet to start the post-Labor Day session, with the e-minis trading slightly lower (and off their highs by ~14 handles) and European stocks trending lower throughout the session. The focus remains on China tariff implementation and the new Nafta pact, though no major developments occurred on either front over the holiday weekend aside from some posturing on social media.

Tech will be an area to watch today as Amazon edges closer to the $1 trillion market-cap mark (closed at almost $982 billion on Friday and currently up another 0.6% in early trading) while several sell-siders are out bullish on the semiconductors space (see below for more on the chip stocks and AMD). We’ll also be paying attention to the offshore drillers after the $2.7 billion Ocean Rig/Transocean deal and ad firms like Omnicom and Interpublic Group potentially getting bogged down by WPP’s soft margin outlook (WPP fell more than 6% in London).

’Startling’ Stocks Rally
The near-nonstop rally over the past two months, which delivered a record on the S&P 500, has been nothing short of breathtaking — or maybe “startling” is a better word for it, as JPMorgan equity strategists put it in a note over the weekend when comparing the outperformance of both U.S. and European stocks versus fixed income year-to-date amid the “deluge of bearish stories.”

While we’re on the cusp of even more worrisome twists in the trade-war saga, it appears as though Wall Street is baking in the expectation that everything will be OK with China, earnings will remain a tailwind in the interim, and stocks will remain a fine vehicle to park your money in the near term.

Case in point are those same JPMorgan strategists who are telling clients to buy on any near-term dip associated with a knee-jerk risk-off move on the potential headline of $200 billion tariff implementation, “as an eventual compromise on trade remains the most likely outcome.” Or Credit Suisse’s Jonathan Golub, who argues that stock prices have lagged EPS growth, “leaving equities 1.5x multiple points cheaper than at the start of 2018,” and unleashes a new S&P 500 price target of 3,350 for 2019, which implies a more than 11% annualized advance over the next sixteen months.

Your 87-Hour ICYMI
Here’s the must-knows over the three-day holiday weekend: Trump tweet-bashed the head of the AFL-CIO (the largest U.S. labor-union umbrella group) on Labor Day; the New Yorker called Giuliani “Trump’s clown”; a New York Times opinion piece on fracking titled “The Next Financial Crisis Lurks Underground” from the co-author of the Enron book “The Smartest Guys in the Room” got a ton of attention; Larry Summers wrote an op-ed in the FT on how ending quarterly earnings reports won’t stop corporate short-termism; the Wall Street Journal highlighted the growing influence of algo traders and trend-following funds (“When Machines (and Humans) Decide to Sell at Once”); the billionaire CEO of one-time hedge fund hotel JD.com (JD -3.3% pre-market) was arrested for alleged sexual misconduct in Minnesota only to be released shortly thereafter; #BoycottNike and #JustBurnIt were trending on Twitter after the company chose Colin Kaepernick as the face of its “Just Do It” campaign (NKE -0.6% pre-market); Tropical Storm Gordon’s center is looking to cross the eastern Gulf of Mexico today; an inferno ripped through Rio de Janeiro’s national museum and destroyed close to 20 million items; “Crazy Rich Asians” topped the box office for the third straight week; Federer was upset in stunning fashion at the U.S. Open; and it’s just two days until the NFL season kicks off, which means many of you will be participating in fantasy football drafts either tonight or tomorrow night (or both nights) — a quick look at the mocks show that the consensus top five picks are Todd Gurley, Le’Veon Bell, David Johnson, Antonio Brown, and Ezekiel Elliott.

Views From the Buy Side
Here are a couple of recommendations that were recently posted on the investment network SumZero:

Idea #1 – Long Despegar – The Cayre Family Office’s Albert Luk recommends going long Despegar (DESP), which closed at a record low on Friday. On August 24, Luk said shares of “The Expedia of Latin America” are worth $43 in three years, which implies more than 150% upside from Friday’s close. He says that the opportunity exists due to 1) key shareholder Tiger Global is selling, which is pressuring this illiquid stock, and 2) “everyone hates Argentina.” Luk compares Despegar today to Booking and Expedia back in their infant stages. Cayre’s AUM is ~$1.2 billion.

Idea #2 – Long Berry Global
GrizzlyRock Capital founder Kyle Mowery recommends a long on Berry Global (BERY), a $6.3 billion market cap packaging company. On Aug. 23, Mowery said Berry is currently in the “penalty box” due to a timing mismatch between input costs and passthrough, but expects the margins to revert over the next one to two quarters. He has a price target of $62 on the stock, implying ~30% upside to its last close. GrizzlyRock’s AUM is ~$105 million.

Separately, Barron’s profiled Mike Lippert, portfolio manager of the $430 million Baron Opportunity fund (BIOPX), which has posted ~12.1% average annual return over the past decade, or better than 87% of all mid-cap growth funds. The fourth largest holding in the fund’s portfolio, after tech megacaps like Amazon, Microsoft, and Alphabet, is ~$8 billion market cap Guidewire Software, which reports earnings tomorrow after the bell (“We believe this is going to be a 20% grower for a very long time”). Other holdings mentioned in the article include Gartner (IT), the fund’s fifth-largest holding, Intuitive Surgical (ISRG), and Tesla (TSLA), which Lippert bought six years ago at $30, sold at $100, and got back in at ~$200; he says the electric automaker is reaching an inflection point in both vehicle sales and gross margins, adding that the company will start to generate a small amount of cash flow later next year.

Notes From the Sell Side
Facebook was downgraded to a neutral by MoffettNathanson as the revenue growth deceleration and long-term margin guidance “does not provide a meaningful near-term path for outperformance.”

Evercore ISI’s CJ Muse recommends aggressively buying the semiconductor stocks, expecting the group to exit the year “like a lion.” He makes some rating changes in the process (upgrading KLAC and downgrading ADI, WDC, and STX) and names 7 top picks (NVDA, MU, XLNX, MRVL, KLAC, ASML and OLED). Two other things of note on the semis:

Tesla is no longer a restricted stock for Goldman, as the bank has reinstated coverage with a sell (same rating as before) and a six-month price target of $210. The bank remains negative on the company’s ability to execute, achieve its targeted production ramp/margins and sustain free cash flow generation.

Goldman also initiated the brick-and-mortar apparel retailers with an attractive view, where the top calls are buy-rated Nordstrom, which was added to the firm’s conviction list (“poised for an inflection in growth and returns as investment headwinds fade”), Kohl’s and TJX while Macy’s gets a sell given traffic and margin headwinds.