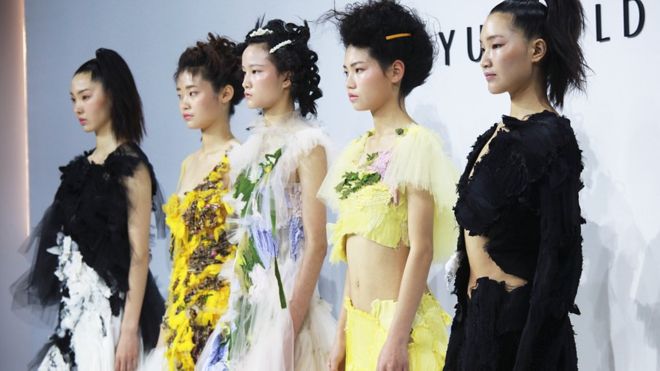 Over the next week Shanghai Fashion Week will fill the city with models, designers and buyers. The show is becoming a key route into China but the lucrative market remains difficult to navigate.

They’re experimental with a taste for clothes that are “vibrant and sculptural yet feminine”, she adds.

“The Chinese market really resonates with those parts of my DNA.”

For the first time Ms Ilincic is taking part in Shanghai Fashion Week, joining a wave of other foreign brands in search of exposure and crucial business contacts.

Launched in 2003, it’s not one of the top four shows – London, Paris, New York and Milan – but its importance has grown alongside China’s economic rise.

“In Asia, there’s an emerging market where lots of the money is spent on Shanghai,” says Tianwei Zhang of Women’s Wear Daily (WWD) .

Many will skip Tokyo’s fashion week in favour of Shanghai “because there’s more money here”, he adds.

Last year, a report by consultancy Bain showed that Chinese spending accounted for one-third of the global luxury market – itself worth 260bn euros ($292bn; £223bn). In 2018, the country’s luxury goods market posted its second straight year of 20% growth, Bain said.

Western brands have long eyed the potential of China’s growing middle class, seeking to find their way into the lucrative – but sheltered – market. Securing business partners and buyers is crucial.

The British Fashion Council (BFC) is one group helping UK designers make inroads in China – from finding a space, to negotiating contracts or licensing arrangements.

BFC chief executive Caroline Rush says that while businesses can do it alone “the norm is to go in with a Chinese partner”. The group is in Shanghai this week to build its network.

It wants to plug into independent retailers across China that reach their customers through social platforms like WeChat and Weibo, and often sell through those channels directly.

The BFC is hosting a trade showcase with Roksanda Ilincic and Peter Pilotto in Shanghai, two brands Ms Rush describes as part of London’s “new guard”.

From buyers to fashion writers, industry figures routinely say Chinese consumers are drawn to the “creativity” of British design.

Among them is Yvonne Gan, chief executive of The Balancing, a chain of Shanghai boutiques, which sell top names including Britain’s Stella McCartney, Victoria Beckham and Anya Hindmarch.

Ms Gan says 40% of total investment in the latest collections was spent on British brands. Chinese labels accounted for just 5%: “Local design is not as creative as British designers [and] also quality is not comparable.”

Still, British firms are competing in a crowded market, trying to please the Chinese consumer – and not all of them get it right.

A high-profile stumble from Dolce & Gabbana over an ad campaign widely seen as offensive led to a severe backlash in China with several retailers pulling the firm’s products.

Meanwhile, Burberry drew some criticism for missing the mark over its latest Chinese New Year campaign.

Other British brands have struggled to gain traction in China. Marks & Spencer left the market in 2017, New Look withdrew last year and Topshop has had troubles with local partners.

“They are sophisticated, well-travelled and demanding in quality and newness.”

Pricing is also a concern. While wealth is rising, hefty import taxes drive the cost of Western luxury labels beyond the reach of many.

He says while spending power is rising, Chinese consumers are not yet as willing to spend on designer clothes as they are on shoes and accessories.

The competitive threat from local talent is also mounting.

There are big names like Angel Chen and Shushu/Tong, along with emerging designers like Caroline Hu and 8on8, all set to gain plenty of attention in Shanghai.

“There are more and more upcoming Chinese designers taking the international stage,” says Pedder Group’s Ms Yu. “They give a fresh perspective.”