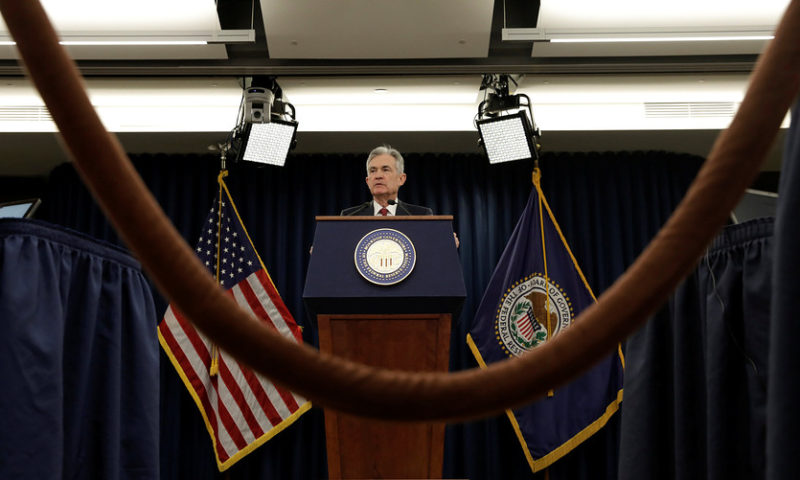 U.S. stocks fell at the start of trade Thursday, with investors still rattled after the Federal Reserve’s interest-rate hike and outlook on future moves left all three indexes at fresh 2018 lows on Wednesday.

With the next earnings season still three weeks away, investors remain focused on macro headwinds facing the market, with the Fed’s decision to raise interest rates still at the fore of traders minds.

U.S. stocks fell sharply Wednesday, after the Fed hiked the federal-funds rate by 25 basis points to a range of 2.25% to 2.5%, its fourth interest-rate hike of the year. Losses accelerated as Fed Chairman Jerome Powell explained the decision and accompanying forecasts.

Investor disappointment came even after a policy statement viewed as slightly more dovish than the central bank’s previous stance, and a survey of Fed members shows the median voter expects two more rate increases next year, rather than three hikes predicted at the September meeting.

But investors have chosen thus far to focus on the hawkish aspects of the Fed’s decision, statement and the subsequent Powell news conference. Of particular interest was Powell’s discussion of the Fed’s quantitative tightening program, which is now removing $50 billion of federal government debt and mortgage bonds from the central bank’s balance sheet. That is just $21 billion less a month than the Fed added to the balance sheet, on average, during its stimulative quantitative easing program that spanned the post-financial crisis recovery.

Powell reiterated in his news conference that balance-sheet reduction would remain on “autopilot,” suggesting that even if the U.S. economy deteriorates significantly, as many market participants are predicting will happen next year, financial conditions will nevertheless become tighter month-by month.

This program of “quantitative tightening” is set to drain $600 billion in liquidity from markets in 2019. By allowing these bonds to roll off its balance sheet, the Fed is causing long-term interest rates to rise, and if this program remains on this fixed path that could more than offset the stimulative effects of any Fed decision to raise interest rates less than twice in 2019, as the FOMC now predicts it will.

What data are in focus?

The Federal Reserve Bank of Philadelphia released the results of its monthly, regional survey of manufacturers, with the index showing a reading of 9.4, down from 12.9 in November and below economists expectations of a 14 reading.

At 10 a.m., the Conference Board will release its latest reading of its leading economic index, a composite of several economic data that have a history of predicting future economic growth.

What are the analysts saying?

YMH9, -0.49% “Investors have lost all hope as Powell was really the last opportunity in ‘18 that could possibly trigger an uptick in willingness to put risk back on,” wrote Joel Kulina, analyst with Wedbush Securities, in a Thursday-morning research note.

“Market has been slow motion car crash, there’s just no where to hide. To the extent anyone had any risk appetite in the final couple of weeks in the year, that is now entirely gone,” he added.

Shares of Rite Aid Corp. RAD, +7.93% are surging 10.4% early Thursday, after the company beat earnings expectations in the most recent quarter, and renewed its pharmaceutical purchasing and distribution agreement with McKesson CorpMCK, +2.64%

Pier 1 Imports Inc. PIR, -37.06%  stock is in focus, after the company announcedit was considering “ strategic alternatives,” for the firm. It also named a new CEO and announced cost cuts and reduced spending. Shares are down more than 25% at the start of trade Thursday.

Shares of BlackBerry Ltd. BB, +5.99% are up 7.2% Thursday, after the company announced third quarter profit and sales beats, earlier in the morning.