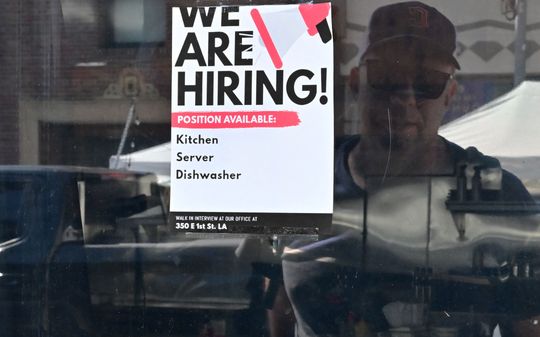 U.S. stocks gave up early gains to finish sharply lower Friday, with all three major benchmarks booking a third straight losing week, after “Goldilocks” August jobs data did little to alter the view that the Federal Reserve would press ahead with a large interest rate rise in late September.

News reports that Russia’s Gazprom wouldn’t reopen a natural gas pipeline to Europe on Saturday appeared to weigh on stock-market sentiment in afternoon trading as investors headed into the U.S. Labor-Day holiday weekend.

Natural gas supply is of “critical importance in assessing the economic outlook for Europe as we head into the winter,” Chris Shipley, chief investment strategist for North America at Northern Trust Asset Management said in a phone interview. A European recession would be “negative for sentiment toward risk assets globally.”

While Northern Trust has a “50-50 base case with respect to the likelihood of a shallow recession versus the soft-landing scenario in the U.S.,” he said, “our expectation for Europe is that the recession scenario has a much higher probability.”

Stocks had initially found support Friday morning when the August jobs report showed the U.S. economy added 315,000 new jobs last month, roughly in line with expectations of 318,000 jobs from a survey of economists by The Wall Street Journal.

It was “a Goldilocks report” as it was not “too hot” while showing the labor market remains “pretty strong” as the Federal Reserve aims to fight inflation by cooling the economy through interest rate hikes, according to Anthony Saglimbene, chief market strategist at Ameriprise Financial.

“From a market perspective, it keeps the debate of a 50 or 75 basis points move by the Fed at the end of the month on the table,” Saglimbene said by phone Friday, referring to the potential size of the central bank’s next rate hike at its Sept. 20-21 meeting. “Market odds are suggesting they move 75 basis points, but with today’s labor report, I think the inflation data later this month is going to be the key data.”

While the headline jobs number for August was in line with expectations, the unemployment rate surprised economists by climbing to 3.7%, from 3.5% in July. To be sure, this increase was largely driven by an uptick in the labor-force participation rate which rose to 62.4% from 62.1%.

“More workers are coming into the fold and I think that’s positive given how many jobs we have open right now,” said Saglimbene. “The one bright spot for the economy has been jobs.”

In other economic news, orders for manufactured goods fell 1% in July, the Commerce Department said Friday, confounding expectations for a 0.2% gain. The drop in orders marked the first decline after nine straight monthly gains.

Other analysts also viewed August’s jobs gains as neither too hot nor too cold.

“It looks like a Goldilocks number, it’s sort of right where expectations were,” said Larry Cordisco, co-lead portfolio manager of the Osterweis Growth and Income Fund, in a phone interview.

“It’s neither showing a big slowdown or too hot of an acceleration, so I think that combined with the overall positioning in the market, it’s a positive for stocks today,” he said. “We’ll see if it holds but that’s the initial reaction.”

In the view of Ron Temple, head of U.S. equity at Lazard Asset Management, the jobs report solidified the perception that the Fed may raise its benchmark rate by 75 basis points for a third time in a row when policy makers meet later this month.

“A 75 basis point rate hike is nearly certain at this point,” said Temple.

Treasury yields were down in the wake of the jobs report for August.

The 2-year Treasury BX:TMUBMUSD02Y yield dropped 12.2 basis points to 3.398%, while the 10-year yield BX:TMUBMUSD10Y fell 7.4 basis points to 3.190%, according to Dow Jones Market Data. The larger drop in the 2-year rate is a sign that traders may be anticipating a less-aggressive pace of interest-rate hikes, which tend to have an outsize impact on short-term yields.

Friday’s decline in 2-year and 10-year Treasury yields appeared to bring some initial relief to the equities market, as their climb over the past week or so has been “a headwind for stock prices,” according to Ameriprise’s Saglimbene.

“We’ll just have to see where the Fed guides monetary policy,” he said, “but I do think the big spike in rates this year is in the rearview mirror.”

Energy XX:SP500 was the sole sector of the S&P 500 to finish with gains Friday, rising 1.8%, according to FactSet data.