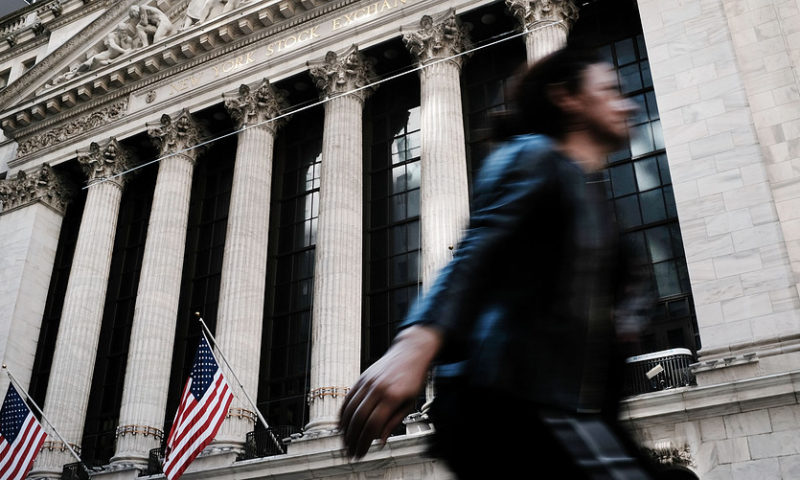 On Wednesday, the Dow and the S&P suffered their biggest one-day drop since February, while the Nasdaq had its biggest slump since June 2016. The decline took the major indexes below key levels, which could be a catalyst for additional selling ahead.

Investors have pinned the selloff on a variety of factors, including a sudden rise in long-dated interest rates since late September. A bond-market selloff saw the yield on the 10-year U.S. Treasury TMUBMUSD10Y, +0.40% top 3.26% earlier this week for the first time since April 2011.

Higher yields raise borrowing costs for corporations. They also divert investment away from stocks. Market turmoil, however, appeared to spark haven demand for U.S. bonds, with the yield on the 10-year note down more than 6 basis points to 3.158%.

Continuing trade tensions with China and concerns about global growth have also been cited as factors behind the equity market’s downturn.

In the latest economic data, jobless claims rose by 7,000 in the latest week, although they remain near multidecade lows. Separately, the consumer-price index rose 0.1% in September. Core CPI, which excludes food and energy, rose at the same pace.

“It’s more of the same from yesterday,” said Sahak Manuelian, managing director of equity trading at Wedbush Securities, who said Thursday’s market action was dominated by short-term players. “There are a bunch of nimble guys who tried to see if they can move some stocks higher but when that failed, sales picked up,” he said.

Manuelian also noted that the narrative of higher rates and U.S.-China trade tension have not changed and it is likely to take a while for the negative sentiment to work itself out.

“We have to remember that days like this can see the algos wreak havoc,” said Liz Ann Sonders, chief investment strategist at Charles Schwab, referring to large automated trading orders. She also believes comments by Jeff Gundlach, chief executive of Doubleline Capital, that interest rates could rise further contributed to deteriorating market sentiment.

Gundlach has been predicting a move higher for rates after the 30-year Treasury yield closed above 3.25% two days in a row last week.

The market losses are “a reaction from investors finally realizing we are in a higher interest-rate environment, and given the elevated level of stocks, market participants were likely looking for a reason to sell,” said Charlie Ripley, senior investment strategist for Allianz Investment Management. “Higher interest rates typically bring on tighter financial conditions which could dampen growth going forward and equity markets are reacting to that.”

He added, “we are witnessing the repercussions in the markets as the Fed takes the punch bowl away from the party.”

Shares of L Brands Inc. LB, +0.63% jumped 5.9% after the Victoria’s Secret parent reported its September sales rose from a year ago and said it was pursuing “all alternatives” for its La Senza business.

Compugen Ltd. CGEN, -2.00% rallied 7.7% after Bristol-Myers Squibb Co. BMY, +0.43% said it would make a $12 million equity investment in the company, as part of a collaboration on a cancer treatment. Shares of Bristol lost 5.4%.

Shares of Tesla Inc. TSLA, +3.09% shed 1.8% after Chief Executive Elon Musk denied a report late Wednesday that James Murdoch is the “favorite” candidate to replace him as chairman of the company.