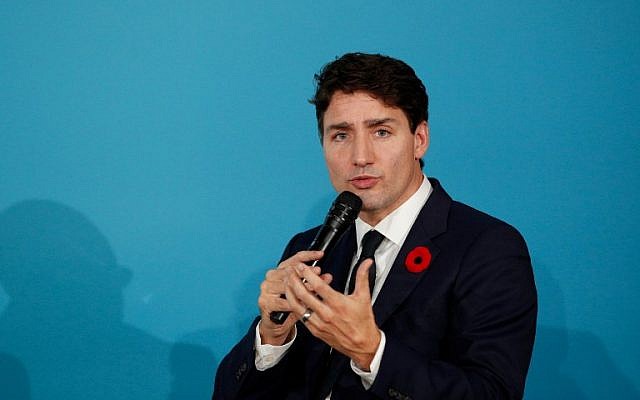 Canada’s prime minister, Justin Trudeau, has become the first western leader to confirm Turkish claims that an audio recording of Jamal Khashoggi’s murder exists and has been passed to intelligence agencies.

The Turkish president, Recep Tayyip Erdoğan, said he had given recordings “to Saudi Arabia, to America, to the Germans, the French, to the British, to all of them”, but initially there was no independent confirmation from any country that they had heard it.

Speaking at a press conference in Paris, where he attended a peace forum after armistice ceremonies, Trudeau said Canadian intelligence had listened to the audio tape provided by Turkish intelligence, but he had not done so.

“Canada’s intelligence agencies have been working very closely on this issue with Turkish intelligence and Canada has been fully briefed on what Turkey had to share,” he said.

“I had a conversation with Erdoğan a couple of weeks ago, and here in Paris we had brief exchanges and I thanked him for his strength in responding to the Khashoggi situation.”

In contrast, the French foreign minister, Jean-Yves Le Drian, said recordings related to Khashoggi’s murder were not to his knowledge in France’s possession, directly contradicting Erdoğan.

His remarks were seized on by the Saudi press to imply Erdoğan was misleading the world about the extent of his knowledge of Khashoggi’s killing in an attempt to undermine the Saudi crown prince, Mohammed bin Salman.

Turkey said the French remarks were unacceptable and not a reflection of the facts. “Let us not forget that this case would have been already covered up had it not been for Turkey’s determined efforts,” said Fahrettin Altun, the Turkish presidency communications director.

It is thought the British officials have listened to a tape, but not been given possession of it, a state of affairs that would square with Le Drian’s claim that France does not possess the tape.

Altun said: “I confirm that evidence pertaining to the Khashoggi murder has also been shared with the relevant agencies of the French government.”

A representative of French intelligence listened to the audio recording and detailed information including a transcript on October 24, he added. “If there is miscommunication between the French government’s various agencies, it is up to the French authorities — not Turkey — to take care of that problem.”

Steffen Seibert, the spokesman for the German chancellor, Angela Merkel, was asked about the existence of a tape and said: “ I can tell you that there has been an exchange of intelligence service information on that.” He declined to give any further details.

British sources previously said they had been briefed on the contents of an alleged tape, but due to the sensitivity of intelligence exchanges, they have refused to elaborate.

Canada has taken a tough line on Saudi Arabia’s human rights record for months, provoking reprisals from Riyadh, including the withdrawal of investment.

The dispute over the tape is important as it concerns Erdoğan’s credibility. He has been pushing for the west to demand Saudi Arabia hand over the alleged culprits behind the admitted killing. He has also implied that Prince Mohammed was aware of the plot to kill Khashoggi and that it was not a rogue operation undertaken by Saudi intelligence without his knowledge or permission.

It is not known whether any tape implicates the crown prince or instead simply provides gruesome details of the murder.

Italy to host Libyan conference in fresh push for elections