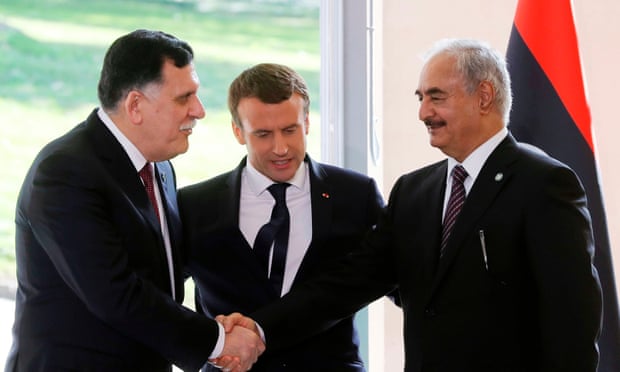 Many of Libya’s leading factions will meet on Monday in Palermo, southern Italy, in an effort to reunite the country’s institutions and find a new path to elections that a previous French-convened conference failed to achieve.

The two-day conference symbolises an Italian determination to regain diplomatic responsibility for Libya after the French president, Emmanuel Macron, convened a surprise summit in Paris in May in a bid to push for Libyan elections on 10 December.

Italy, in the midst of forming a government at the time, was aghast at Macron unilaterally trying to stamp his brand on Libya. Politicans believed such as swift timetable was designed to benefit Gen Khalifa Haftar, the anti-Islamist strongman in Libya’s east, rather than the UN-backed government in Tripoli.

France argued at the time that the UN’s efforts to create peace were stalling, and a new initiative was needed to galvanise all sides.

The Palermo summit has revealed tensions inside the Italian government, with the Italian foreign ministry and the UN not informed by the Italian prime minister, Giuseppe Conti, before the summit was announced.

The UN special envoy for Libya, Ghassan Salamé, last week tried to wrest back control of the agenda by acknowledging that the widely derided timetable could not be met, instead proposing a conference in the first weeks of 2019 leading to “an electoral process starting in 2019”.

Salamé is buoyed by polls showing 80% of Libyans want elections. He believes that a new democratic mandate could sweep away some of the politicians in the east and west who are systematically blocking reconciliation, leaving the country with divided institutions and lawlessness.

But the chances of success for the Palermo summit were dealt a blow when Haftar, the leading figure in Libya’s east, announced at the last minute he would not attend, citing the presence of Qatar, “and other supporters of al-Qaida” at the event. Italian sources said efforts were being made to make him reconsider.

Libya has been gripped by violence, corruption and political divisions, buttressed by outside powers, since Muammar Gaddafi was ousted and killed in a Nato-backed uprising in 2011. Italy has been broadly supportive of the UN-recognised government, based in Tripoli, that has had support of Islamist factions to which the Egypt-backed Haftar, the United Arab Emirates and France are opposed. Italian interest in Libya is based on its colonial history, oil and its base as a route for thousands of African migrants.

Libya specialist at the European council for foreign relations, Tarek Megerisi, said: “This whole conference has to be seen primarily as a power play by the Italians against the French. They hoped to make it larger than the Paris summit to show it had greater legitimacy, but with each iteration its scale has been diminished, and the number of senior foreign ministers attending is in doubt. From the UN point of view, the summit will be regarded a success if it leads to greater unification of Europe’s position, including EU support for the UN plan for a national conference leading to elections.”

He said Europe should focus on a small number of objectives at the summit, including unifying the two rival central banks, re-energising stalling security arrangements for the capital Tripoli and establishing a process for Haftar and military leaders in Libya’s west to discuss military unification.

Jalel Harchaoui, a lecturer in geopolitics at Versailles University focussing on Libya, also said the summit was as much about Franco-Italian as Libyan politics. “France’s support for Haftar became more overt after Jean-Yves Le Drian [previously defence minister] moved from the defence to the ministry of foreign affairs, and he took with him the defence ministry’s counter-terrorism priorities and the desire to defeat the Muslim Brotherhood in North Africa,” he said.

“France sees Haftar as a legitimate figure, but the French plan for elections in 2018 has lost out because it was never realistic. Palermo may end up being about small steps to stability and containing the mess. Migration from Libya to Italy is now low and so the crisis is less urgent for Europe. Perhaps as a result there will be fewer deliverables from Palermo.

“Haftar not attending would be a blow for Italy’s diplomacy, given that PM Giuseppe Conte flew personally to Libya to plead with the field marshal. Haftar’s absence would also act as a reminder about how vivid the competition between the Islamists of Misrata and eastern Libya still is. Every time diplomacy is undermined, Libya makes a small step towards irreversible partition.”

“The Palermo conference on Libya seems too vague,” she said. “It’s hard to imagine the new government in Rome having the authority or capacity to win a leading role in Libya over France.”