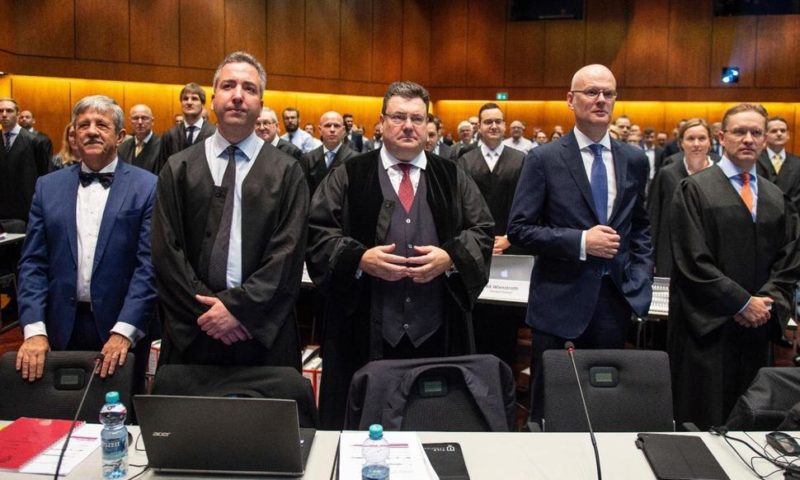 Trial proceedings have begun against Volkswagen on behalf of investors alleging the company did not give them timely notice of its scandal over cars rigged to cheat on diesel emissions tests.

FRANKFURT, GERMANY — Trial proceedings have begun in the lawsuit brought against Volkswagen by investors alleging the company did not give them timely notice of its scandal over cars rigged to cheat on diesel emissions tests.

Investors are seeking almost 9 billion euros ($10.4 billion), saying Volkswagen didn’t give them the information they needed to decide what to do with their shares before the scandal became public. The U.S. Environmental Protection agency accused Volkswagen in September 2015 of manipulating diesel emissions, sending the shares sharply lower.

The case opening Monday in front of the higher regional court in Braunschweig involves claims from investors that will serve as a model for further cases, the dpa news agency reported. The model case involves claims of 4 billion euros from Deka Investments and other shareholders. Proceedings are being held in a convention hall due to the number of participants and high public interest.

The company says it met its duty to inform investors in time.

In a setback for investors, Presiding Judge Christian Jaede indicated that claims involving company actions before the middle of 2012 could be excluded. Attorneys for the investors had argued that company’s behavior as far back as June 2008 should be considered, arguing Volkswagen knew then that its diesel technology was flawed.

The company has argued that previous industry cases of emissions violations had been settled with more modest penalties and that top management did not know it would face a sweeping violation notice that cost it billions and severely damaged the companies’ reputation.

Volkswagen has admitted rigging engine control software in the U.S. to turn down emissions controls when vehicles were not being tested. That way they passed certification tests but spewed up to 40 times the U.S. limit of harmful nitrous oxides during every day driving.

The company pleaded guilty and agreed to pay $4.3 billion in fines and penalties. Two executives were jailed in the U.S. and the company’s former CEO, Martin Winterkorn, was charged with wire fraud and conspiring to violate the Clean Air Act but cannot be extradited from Germany. A criminal investigation is still ongoing in Germany.

In all, the company has set aside 27.4 billion euros ($31.7 billion) for fines, settlements, recalls and buybacks.