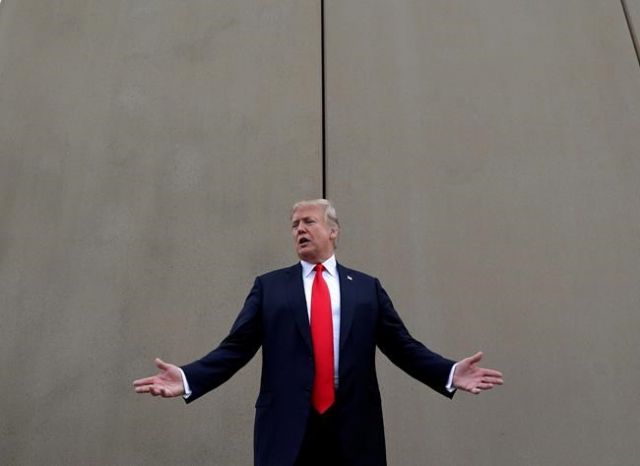 Children torn from their parents, refugees turned away, tear gas fired on asylum-seekers, and a president who says he’s making good on promises to protect the nation’s borders. In a breathless 2018, they were just a handful of headlines on immigration, one of the year’s most dominant issues.

Combined with a relentless stream of administrative memos and changes in regulation and enforcement, it represented a government bombardment on virtually every type of immigration — a bold follow-up to the opening salvo of President Donald Trump’s first year in office.

For those who champion Trump and believe that cracking down on immigration translates to better lives for Americans, it has been a year of fulfilment of campaign promises. For those who’ve watched in horror, it harkened back to other points in the country’s history, when fear of new arrivals led the U.S. to refuse entry to various groups and when open discrimination of certain ethnicities prevailed.

“This is our generation’s sort of existential moment,” said Frank Sharry, head of pro-immigration group America’s Voice. “Are we going to continue to be a nation that practices ‘e pluribus unum’ and welcomes people from around the world to make this country better? Or are we going to shut the door?”

Throughout 2018, the answer has largely been the latter.

Even as roundups and deportations persist in targeting those who enter the U.S. illegally, the Trump administration has pushed beyond that to redefine what legal immigration looks like, too. It has slowed down or altogether halted many seeking to come to the country for a job offer or through their relationship to a citizen, and narrowed the chances of finding a home here as a refugee or asylum seeker. Jarring visuals of children in detention centres and other enforcement actions have dissuaded some from seeking to come here at all.

“There has been this constant chip, chip, chipping away at the legal immigration system using every tool of the executive branch,” said Doug Rand, who worked in the Obama administration before helping found Boundless Immigration, which helps people navigate the immigration system.

The year neared its close with the administration saying those seeking asylum would be forced to wait in Mexico, a major shift that immediately spurred questions of legality from opponents. Meantime, the possibility of a government shutdown loomed as Trump and Democrats once again butted heads over funding to build a wall along the border with Mexico.

Even without it, though, the policies he’s pursued have effectively put up a virtual wall.

“That is far more effective than a border wall ever would be,” said Sarah Pierce, a policy analyst with the nonpartisan Migration Policy Institute.

Even top-tier computer programmers, architects, engineers and other professionals with job offers in the U.S. saw their applications for H1-B visas under much more scrutiny; a means of expediting processing of those visas was ended under Trump, and bids for work authorization have been met by what employers and immigration attorneys say seem like endless requests for evidence to prove seemingly straightforward facts.

Still, the odds of those professionals eventually gaining clearance to enter the U.S. are better than for many others.

Trump’s so-called “travel ban,” the first iteration of which was unveiled in the president’s first week in office, was upheld in June by the U.S. Supreme Court, stopping most visas for residents of mostly Muslim Libya, Iran, Somalia, Syria and Yemen, as well as North Korea and Venezuela. Though the policy allows for waivers, initial data showed few such applications were actually approved, effectively shutting the door to most from those nations.

Even as wars, persecution and famine have continued around the world, the U.S. capped refugee admissions at 45,000 for the fiscal year that ended Sept. 30, the lowest ceiling since the State Department began tracking the figure in 1980. Far fewer were actually admitted in that time frame: about 21,000 refugees. The number is likely to fall further, with the cap for the current fiscal year set at 30,000.

Meantime, tens of thousands fleeing violence in Central America sought asylum in the U.S. this year. The Trump administration responded bynarrowingwho is eligible, declaring that neither those escaping gang violence or domestic abuse nor those who cross the border illegally qualify. Both changes have been blocked by federal courts.

Some seeking refuge in the U.S. are stuck in untenable positions.

At every turn, there were policy changes. One proposed rule would restrict visas or legal permanent residence for those receiving certain government benefits for low-income people, such as food stamps. Hundreds of immigrant enlistees in the Army were discharged or had their contracts cancelled, though some were later reinstated. Even some U.S. citizens were targeted by a “denaturalization task force” looking for naturalized Americans with past infractions.

More than any other shifts in policy, the Trump administration’s move to separate apprehended migrant children from their parents shook people around the world. Though Trump eventually ended widespread use of the practice, the scars remain for those affected.

Polling finds a big majority of Americans still view the country’s openness to immigrants as essential to the nation’s identity. But the profound shift in government policies on the subject threatens that idea of the U.S. as a welcoming land of opportunity for all.

‘We are becoming a joke’: Germans turn on Deutsche Bahn