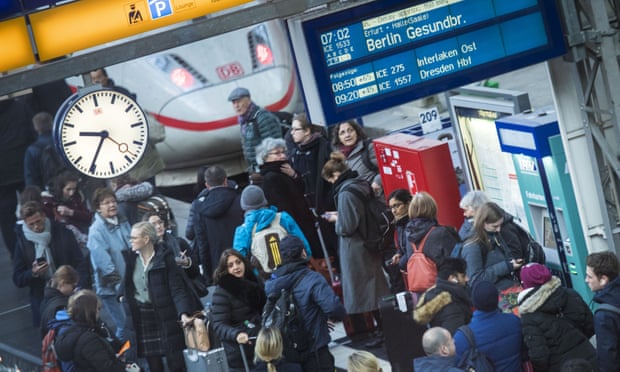 Cancelled trains, lengthy delays, cracked bridges and wildcat strikes by disgruntled employees – a trail of chaos in recent months has caused Deutsche Bahn (DB) to become the butt of jokes and withering complaints.

Once the pride of the German state that owns it and the envy of much of the rest of the world, Germany’s national rail network is showing considerable signs of strain and decline amid accusations of chronic underinvestment in its infrastructure.

Transport watchers say the rail network is in danger of plunging to reliability levels familiar to British commuters but alien to Germans who for years took punctuality for granted.

Deutsche Bahn transports 2 billion customers a year and is the largest rail operator in Europe. At its peak, 95% of German trains ran on time, whereas at one point this year that figure slumped to just a third.

Next month railway chiefs will have to present a rescue plan to government. But even then industry observers are pessimistic.

“The danger is that the condition of the railway has reached the point where it is going to continue going downhill despite increased government investment,” Kay Scheller, president of the national audit office said earlier this month, citing a chronic investment bottleneck.

Germany’s Pro Rail Alliance, an amalgamation of non-profit NGOs and businesses, says 90% of Germans support its call for more investment. It argues that despite a big financial injection in recent years, Germany’s €69 per capita spending in rail infrastructure still lags far behind that of comparable countries such as Britain (€165) and Switzerland (€362).

“There’s just not enough money, and necessary investment decisions have been put off,” said Karl-Peter Naumann of the passenger lobby group Pro Bahn.

The embarrassment is rising along with the commuters’ pain.

That is an exaggeration, of course. But it reflects the extent to which commuters are smarting. The paper cited some regular examples of excuses for chaos on the railways, including frozen tracks, branches on the line, and under- or overheated carriages.

“To the [neighbouring] Swiss, who are annoyed by German unpunctuality because it messes up their own train timetable, we are becoming a joke,” the paper added.

In its effort to persuade more customers to take the train, DB has run a number of campaigns in recent years – offering everything from free massages to free child care. When delays started becoming the norm, it experimented with pumping calming scents through the air conditioning to reduce the risk of rail rage.

“They can forget the cheap gimmicks – just make the trains run on time again, that’s all we want,” said Wilhelm Stark, a regular commuter from Hamburg to Berlin.

Industry observers say one of the main problems is that for years the transportation of German passengers has only made up about 30% of DB’s main business. Its transport logistics arm, DB Schenker – which has businesses as far afield as South Africa, Australia and China, and is the biggest freight operator in the UK – is far bigger. DB Schenker was built up in order to make DB attractive for investors ahead of privatisation plans around the turn of the century, which were then shelved in 2014. Vehement political opposition to the deal focused in part on the state of the privatised railway network in the UK.

Transport economists have advised DB to sell off DB Schenker, as well as Arriva, the British operator of buses and regional trains, which it also owns.

“It would make sense for DB to concentrate on its main business instead: transporting people in Germany reliably and at a reasonable price, and the sale could free up a lot of money that could be used for necessary investments in tracks and trains,” said Sören Götz in a recent analysis for Die Zeit.

Government critics cite the problems at DB as symptomatic of a wider national crisis in infrastructure investment.

Thousands of bridges need repairing or even replacing, roads are riddled with potholes, plaster is crumbling from the walls of schools, and there are concerns over an under-equipped military.

Germany lags well behind much of the rest of the world on high-speed internet. Just 2% of households are supplied by fibre broadband, compared to 75% in Japan and South Korea, according to the Organisation for Economic Cooperation and Development.

This is all despite an eye-watering record budget surplus for the first half of 2018 of €48bn.

According to researchers at the Munich-based Institute for Economic Research, the German state needs to increase its investments by 40% in order to reach just the average for OECD countries. The International Monetary Fund accuses successive governments of having spent too much on tax breaks and welfare benefits rather than fixing the country’s crumbling fabric.

According to fiscal observers Germany has been too fixated on the so called schwarze null or “black zero” – the sacred national obsession with balancing the budget.

According to Marcel Fratzscher, the highly respected president of the German Institute for Economic Research in Berlin: “The government is continuing to do far too little to address a massive public investment deficiency and an infrastructure which is getting worse compared to international standards.”