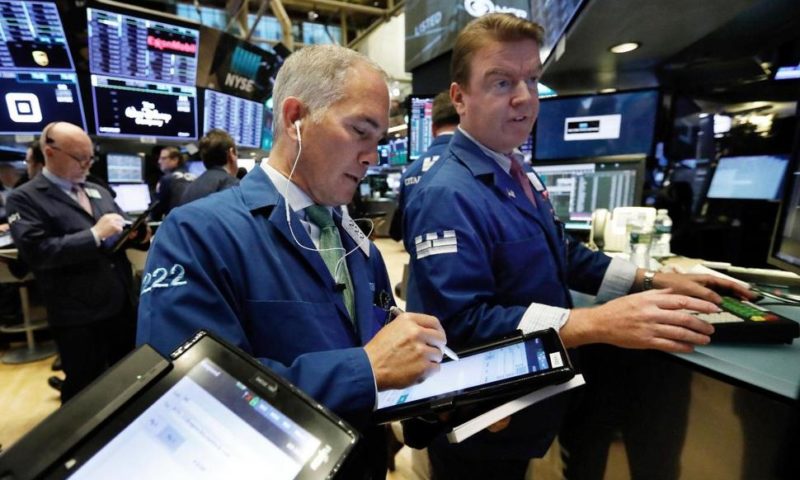 The tech stock tumble came followed an analyst report that suggested Apple significantly cut back orders from one of its suppliers. That, in turn, weighed on chipmakers.

“With the news out of the Apple supplier this morning, you have the market overall questioning the growth trajectory as we look out to 2019,” said Lindsey Bell, investment strategist at CFRA. “We continue to like tech going into next year, but we think it could be a little bit of a rocky period for the group as we continue through the last two months of the year.”

The market’s slide came after a two-week winning streak.

“Expectations are really that the deregulation process that has benefited banks up to this point is going to be slowed down with the Democrats in charge,” Bell said.

Stocks appeared to have regained their footing after a skid in October snapped a six-month string of gains for the S&P 500. Stocks rallied last week after the U.S. midterm elections turned out largely as investors expected, with a divided Congress promising legislative gridlock in Washington the next couple of years.

While the market has typically thrived in periods of divided government, investors continue to grapple with uncertainty over the U.S.-China trade dispute and the potential impact of increased oversight of Corporate America by Democrats, who will be taking over leadership in the House of Representatives in January.

In addition, some companies have recently reported third-quarter earnings and outlooks that have stoked investors’ worries about the future growth of corporate profits.

While companies got a boost this year from the lower tax rates put in place by President Donald Trump and the GOP last December, several companies have recently warned about the impact of higher costs related to tariffs and rising interest rates.

“The bull market is not over, the economic expansion is not over, but things are starting to wind down,” said Randy Frederick, vice president of trading & derivatives at Charles Schwab. “We’re clearly getting into the late innings of the ball game.”

British American Tobacco, which makes Newport cigarettes, plunged 8.8 percent to $38.08 on reports that regulators were considering a ban on menthol cigarettes.

PG&E tumbled 17.4 percent to $32.98 after the electric utility told regulators that a high-voltage line experienced a problem near the origin of one of the major California wildfires before the blaze started.

Investors bid up shares in Athenahealth after the struggling medical billing software maker said it received a $5.7 billion cash buyout offer. The stock jumped 9.7 percent to $131.97.

About 90 percent of S&P 500 companies have reported third-quarter results so far, with some 51 percent of those posting earnings and revenue that topped Wall Street’s forecasts, according to S&P Global Market Intelligence. Several big retailers are due to deliver results this week, including Walmart, Home Depot, Williams-Sonoma, Nordstrom and J.C. Penney.

“That could actually probably boost the market,” Bell said. “Retailers are going to have a better third quarter than most people expect. A lot of them ordered goods ahead of the tariffs going into place, so they’re not going to have to pass on higher prices on to the consumer this holiday season.”

Benchmark U.S. crude gave up an early gain, sliding 0.4 percent to settle at $59.93 per barrel in New York. Brent crude, used to price international oils, dipped 0.1 percent to close at $70.12 per barrel in London. Oil futures rose earlier on news that Saudi Arabia and other major producers planned to reduce output.