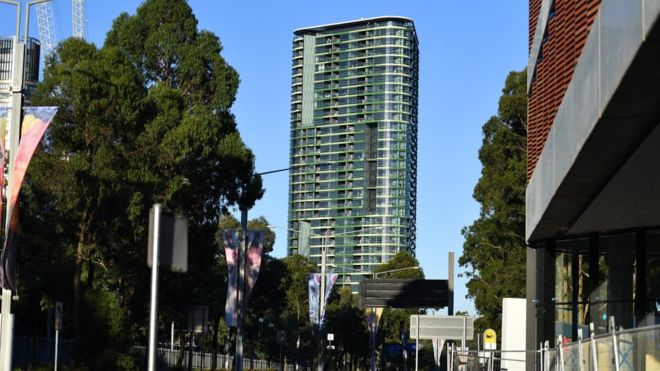 Hundreds of people have been told to leave a Sydney tower block for a second time, after a crack appeared in its walls on Monday.

Many residents of the 38-storey Opal Tower had moved back in, after the alarm was first raised when loud noises were heard and a crack was discovered.

The company that built the tower said it remained “structurally sound” and the relocation was just a precaution.

It says this will allow engineers and investigators to work around the clock.

The builder, Icon, said that no residents were in danger, but this would help them repair the site in the quickest time possible without further disruption to residents.

The investigation was expected to take up to 10 days and Icon said it would provide all accommodation.

Angry residents complained about being forced to leave their apartments.

“I think no one can trust [them] because they forced people to go back to their property and today they’re standing in front of us [to] say everyone has to leave the building,” said one.

Another said: “We’re a bit frustrated. We were planning on spending the New Year here with family and friends. That’s actually one of the reasons why we moved into this building three months ago.”

Authorities had previously said 51 of the tower’s 392 units were affected and the newly completed building in Sydney Olympic Park was declared safe for a majority of residents to return.

As many as 3,000 people were evacuated on Monday, after an internal support wall failed on the 10th floor of the building, according to police.

Icon confirmed that a pre-cast concrete panel had cracked in the building.

A team of engineers from Icon and the building’s developer Ecove have been assessing the building, which was only completed earlier this year.

On Wednesday, the New South Wales government said it was also investigating the building’s structural integrity and that of neighbouring residential towers.

Engineers earlier said the high-rise tower had moved up to 2mm.

However, Ecove has defended the building’s “high quality”, which it said was above the industry standard.

Japan shrinking as birthrate falls to lowest level in history