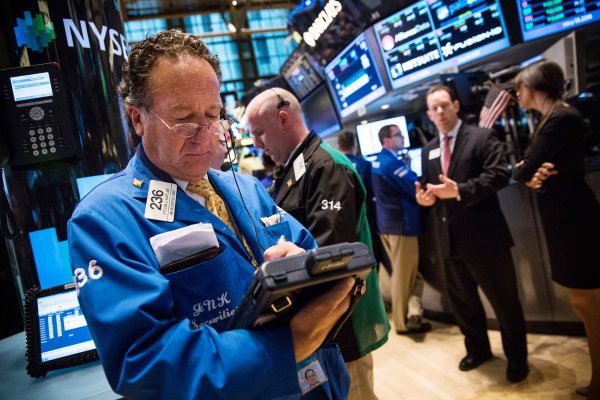 Weakness in software, internet and Tesla (TSLA) shares dragged the composite, which added only 0.4%. Tesla plunged 17% as it comes off a heated advance over the past eight weeks.

Canaccord Genuity downgraded the stock to hold from buy and maintained a 750 price target. “Given the 3,000 per week China Model 3 production expectations in a country that remains on lockdown, we feel a reset of expectations in Q1 is likely and thus needs to be reflected in the valuation,” analyst Jed Dorsheimer wrote in a note to clients Wednesday.

The S&P 500 rose 1.1%. The Dow Jones Industrial Average climbed 1.7%. Volume rose, according to unconfirmed figures. Advancing stocks led decliners by a 3-1 ratio on the NYSE and by 12-to-5 on the Nasdaq.

Dow component Home Depot (HD) cleared the 236.63 buy point of a cup-with-handle base, although volume was about half its average. The relative strength line is lagging, which is another problem for this breakout. Home Depot was added to IBD Swing Trader, which is looking for a short-term gain on the home improvement stock.

But the IBD 50 lagged sharply, as more than half the stocks declined. Innovator IBD 50 ETF (FFTY) reversed lower to a loss of about 1%. Three components were mainly responsible for the underperformance.

Paylocity (PCTY) and Boot Barn (BOOT) plunged roughly 9% each after both companies reported earnings. Paylocity beat views, but posted weaker-than-expected margins. Its sell-off contributed to the weakness in software stocks today. Paylocity shares are heading toward a test of the 10-week moving average. Boot Barn missed profit estimates and gave a weak outlook. The footwear retailer gapped to its 200-day moving average, where it bounced.

Intuit (INTU) tried to break out past the 293.10 buy point of a cup-with-handle base, but reversed lower. PennyMac Financial Services (PFSI) broke out of a flat base, rising above the 34.84 buy point in heavy volume.

Emergent BioSolutions (EBS) broke out of a cup-with-handle base, but volume was only average. The company makes an anthrax vaccine and specializes in treatments for public health hazards.

Crown Holdings (CCK) leapt past the 77.33 buy point of another cup with handle. Volume was heavy after the aluminum-can manufacturer beat profit views.