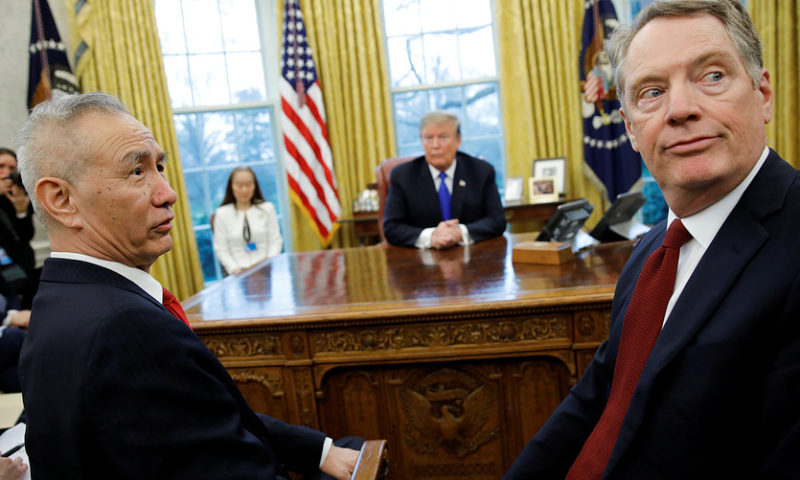 U.S. stocks came off earlier highs but still closed higher Monday after President Donald Trump tweeted that he would delay additional China tariffs, and that there had been “substantial progress” in trade talks over the weekend.

Trade headlines dominated the action, with global equities climbing after Trump tweeted late Sunday that he would extend a March 1 deadline for increasing tariffs on Chinese imports. He cited “substantial progress” across key topics such as intellectual property, technology transfers, agriculture and currency, and said if that continues, he will meet with President Xi Jinping at Mar-a-Lago to wrap up a deal.

The comments came after U.S. and Chinese negotiators held talks through the weekend in a bid to resolve the long-running trade war. Still, Chinese state-owned Xinhua News Agency said in a commentary that the latest round of talks show “there are still some differences that need more time to be ironed out.”

Optimism was further boosted by reports that Trump told a gathering of state governors Monday morning that there would be soon be a “signing ceremony” for the trade deal, supporting widespread perceptions that the president is eager to reach a deal in the coming weeks.

The Chicago Fed national activity index declined in January to negative-0.4, falling from a downward-revised, positive reading of 0.5 in December. A negative reading indicates the economy is growing at a below-trend rate.

Wholesale inventories in the U.S. rose 1.1% in December, according to a Census Bureau estimate that was delayed due to the government shutdown.

“We’re seeing progress on geopolitical issues,” Stephen Lee, founding principal of Logan Capital Management, told MarketWatch, pointing to reports that suggest the U.S. and China are close to reaching a deal, or at least a truce, on trade issues.

The removal of the threat of higher tariffs, Lee argued, should be a boon for stock pickers, as market performance would now hinge more on how individual companies are managing the changing global economic landscape and entrenching themselves in fast-growing economies like that of China and India.

“The biggest drawdown since early January for the S&P 500 has been only 2.2%, thus, the market is due for a breather,” he said.

Shares of General Electric Co. GE, +6.39% rallied 6.4% after the industrial conglomerate announced the sale of its biopharama business to Danaher Corp. DHR, +8.52% for $21 billion in cash. Danaher also soared 8.5%.

Berkshire Hathaway Inc. BRK.A, +0.43% BRK.B, +0.20% class A shares were up 0.5% after Chairman and Chief Executive Officer Warren Buffett released his investment letter over the weekend. The conglomerate swung to a $25.4 billion loss in the fourth quarter, partly due to an unexpected write-down for Kraft Heinz Co. KHC, -2.06% .

Shares of Kraft Heinz fell 2.1% after plunging 27% on Friday, its worst session ever after disappointing earnings and news of a probe by the Securities and Exchange Commission.

Shares of Newmont Mining Corp. NEM, -1.04% dropped 1% after Barrick Gold Corp. ABX, -3.09% said it had made an unsolicited proposal to buy the rival gold miner in a stock deal that would value Newmont at nearly $18 billion.