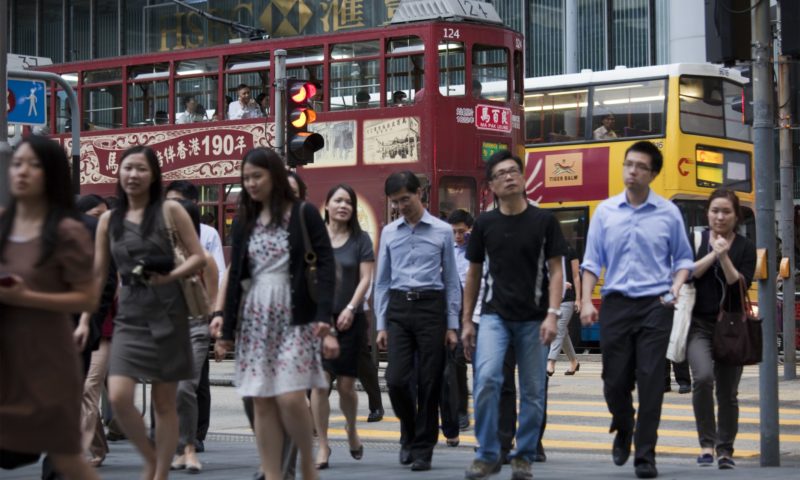 Bears have returned to target Hong Kong’s equities and currency after being blindsided in a painful short squeeze last month.

The Hang Seng Index closed 2.4 percent lower and the Hong Kong dollar fell toward the weak end of its trading band with the greenback as traders returned to work Tuesday after a holiday. Some blamed China’s weak manufacturing data over the weekend for the losses, as well as reports of a U.S. warship sailing close to islands claimed by China. Mainland markets and exchange links with Hong Kong will be shut throughout the week.

Everything from the Sino-U.S. trade dispute to higher interest rates have made negative sentiment the flavor of the year in Hong Kong, where stocks have just clocked a fifth straight monthly decline. But news from Beijing or Washington can trigger intraday pops, which magnify losses for shorts as traders rush to cover bearish bets. Some 11 stocks on the Hang Seng Composite Index rose more than 20 percent last month, while the Hong Kong dollar’s biggest surge in 15 years shocked what is typically a sleepy market.

“Hong Kong is a gateway market to China, and sentiment tends to shift on a dime,” said Stephen Innes, Singapore-based head of trading for Asia Pacific at Oanda Corp. “Traders and investors will be sensitive to relatively minor adjustments in the short-term economic data — today’s drop is a catch up to the weekend’s PMIs. The short squeeze in September suggests bigger players are looking at pockets of opportunities.”

Rebounds in the likes of BYD Co., Ping An Insurance Group Co. or Sinotruk Hong Kong Ltd. forced traders with short positions to buy the shares, pushing the companies toward some of the biggest rallies in Hong Kong. But betting against the Hang Seng Index broadly has been a profitable trade this year: the gauge lagged the MSCI World Index for a sixth straight month, matching record streaks seen in 2013 and 1982.

Some investors are bracing for more losses. The city’s most popular exchange-traded fund of 2018, which is short the whole equity market, attracted a record $60 million inflows last week.

The Hong Kong dollar weakened as much as 0.13 percent, after slumping the most since January 2016 last week. The decline came after the currency posted its biggest daily jump in 15 years late last month amid a buying stampede built on bets that liquidity would tighten. 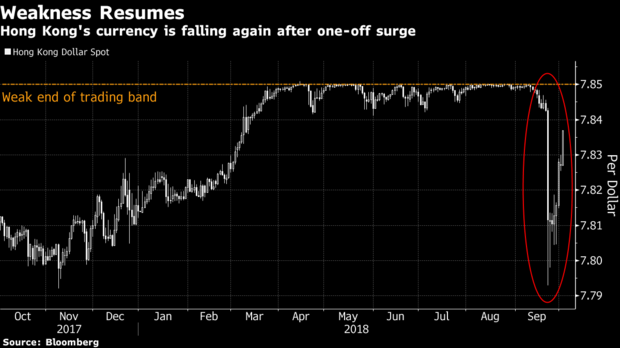 “The Hong Kong dollar is in a correction from its sizeable gain at the end of September, as several one-off factors supporting the currency, such as the quarter-end liquidity squeeze and equity-related inflows, are out of the way,” said Eddie Cheung, Asia foreign-exchange strategist at Standard Chartered Plc in Hong Kong.

It’s a bad start to a quarter that tends to be kind to the Hang Seng Index, which fell into a bear market in September. The benchmark had kicked off the final three months of the year on a high note every time since 2011, and has ended the quarter lower on only six occasions in the past three decades.