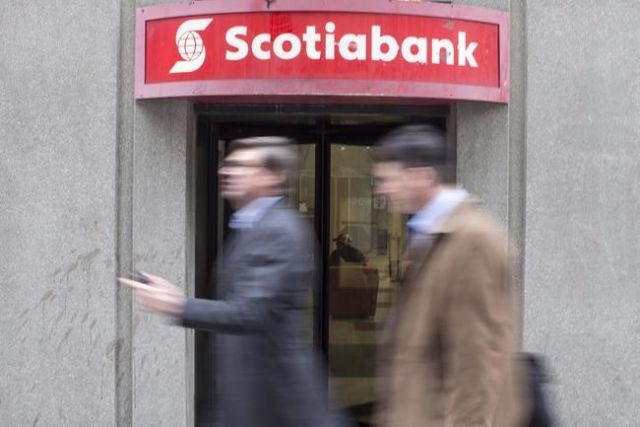 The Bank of Nova Scotia hiked its dividend as it reported its first-quarter profit slipped to $2.25 billion from $2.34 billion a year earlier, missing market expectations.

The Toronto-based lender’s earnings for the three-month period ended Jan. 31 amounted to $1.71 per diluted share, compared with $1.86 a year ago.

On an adjusted basis, the bank reported first-quarter net income of $1.75 per diluted share, down from $1.87 per diluted share a year ago. That was below the adjusted earnings of $1.82 per share expected by analysts, according to Thomson Reuters Eikon.

“We had a solid start to the year with strong earnings growth in international banking and wealth management. This quarter also saw good progress related to the integration of recent acquisitions which is proceeding as expected,” said Brian Porter, Scotiabank’s chief executive in a statement.

“While significant market volatility impacted some of our business lines, we still experienced strong growth. In addition, credit quality remains strong and in line with recent quarters.”

The Toronto-based lender’s Canadian banking arm saw net income attributable to equity holders slip by three per cent to $1.07 billion but its international banking division reported a 17 per cent increase in earnings to $782 million.

Scotiabank’s global banking and markets business however saw a 26 per cent drop in net income attributable to equity holders to $335 million.

Provisions for credit losses, or money set aside for bad loans, was $688 million, up from $544 million a year earlier.

The bank’s common equity tier 1 ratio, a key measure of the its financial health, was 11.1 per cent, down from 11.2 per cent a year earlier but unchanged from the previous quarter.

Scotiabank also announced Tuesday that it has entered into a non-binding memorandum of understanding regarding its interest in Thailand-based Thanachart Bank Public Co. Ltd, also known as TBank. TBank and TMB Bank Public Co. Ltd., also based in Thailand, have been planning to merge, subject to approval.

“It is currently expected that the merger and related transactions would result, if concluded, in Scotiabank significantly reducing its investment in Thailand and holding a significantly smaller stake in the combined bank and receiving proceeds which is expected to result in a gain on sale,” the bank said in a statement.

FTSE 100 held back by rising pound as U.K.’s May delays Brexit vote