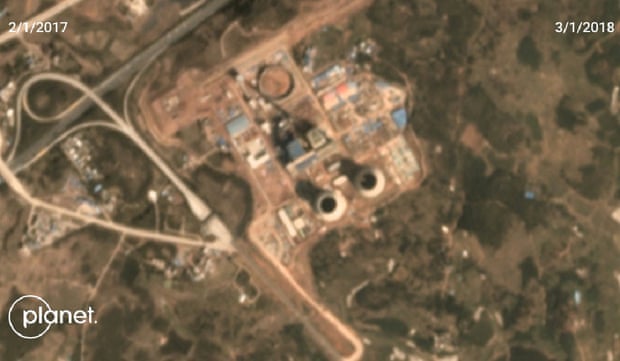 Chinese coal-fired power plants, thought to have been cancelled because of government edicts, are still being built and are threatening to “seriously undermine” global climate goals, researchers have warned.

Satellite photos taken in 2018 of locations in China reveal cooling towers and new buildings that were not present a year earlier at plants that were meant to stop operations or be postponed by orders from Beijing.

The projects are part of an “approaching tsunami” of coal plants that would boost China’s existing coal capacity by 25%, according to the research group Coalswarm.

The total capacity of the planned coal power stations is about 259GW, bigger than the American coal fleet and “wildly out of line” with the Paris climate agreement, the group said in a new report.

“This new evidence that China’s central government hasn’t been able to stop the runaway coal-fired power plant building is alarming – the planet can’t tolerate another US-sized block of plants to be built,” said Ted Nace, executive director of CoalSwarm, which is funded by international green groups and private donations.

Many of the power stations date back to a 2014-16 surge when the regime permitting construction was devolved from Beijing to provincial authorities. That led to a threefold increase in permits being issued between 2013 and 2015. In response, during 2016 and 2017 the Chinese government ordered projects to be slowed down, postponed or cancelled.

But satellite photos analysed by Coalswarm show many power stations have continued to be built, including the Huadian Nanxiong station in south-east China. Despite the government ordering the plant to be suspended in January 2017, two cooling towers had sprung up by March 2018.

Other photographs show water vapour emerging from cooling towers where there was none before, such as at the Zhoukou Longda power station in central China, which indicatesa plant burning coal and generating electricity.

Some plants seem to have been built but not connected to the grid, which Coalswarm said appeared to be officials using a “sleight of hand” to avoid busting the government-imposed cap on coal.

China’s current five-year plan dictates that there should be no more than 1,100GW of coal by 2020, but the 259GW increase via new plants comes on top of 993GW of existing capacity.

Coalswarm said that given China had about half the world’s coal power capacity the country’s “coal policies have an outsized effect on global climate prospects”. The group called on China to act quickly to cancel the projects.

Corporations behind increase in developing-world debt