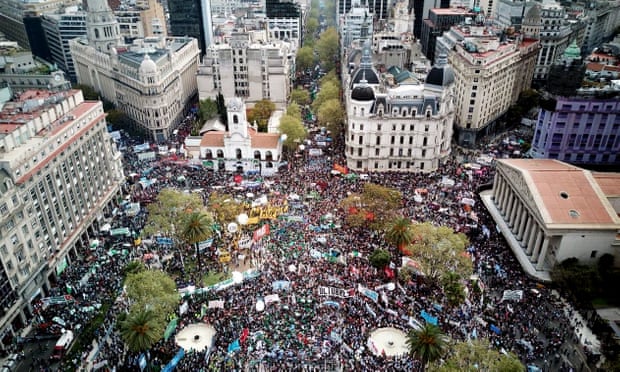 An “explosion” in corporate and household debt across the developing world since the financial crisis has left some of the world’s poorest countries with little protection against Donald Trump’s trade wars and a slowdown in global growth.

The United Nations Conference on Trade and Development (Unctad) warned in its annual health check on the global economy that while governments had kept a lid on their debts, private corporations were behind a dramatic increase in developing-world debts.

“The core concern is the continued strong dependence of tepid global growth on debt,” it said.

Since 2008, global debt has soared from $142tn to $250tn, which is three times the combined income of every nation. Unctad said that this situation was worse than expected after global incomes failed to keep pace with rising debt levels.

The report found that the ratio of global debt to GDP is one third higher than in 2008 before the crash. And the situation was much worse in developed-world countries that had borrowed heavily in recent years from western banks offering ultra-cheap short-term loans.

Turkey and Argentina are among a group of nations that have suffered a severe economic shock since the US Federal Reserve began increasing interest rates, which pushed up borrowing costs to their largest businesses.

Argentina was forced last month to request aid from the International Monetary Fund while many investors have taken bets that Turkey will soon follow suit. African countries, including Zambia, are on a watchlist at the IMF’s headquarters in Washington in case they also find they are unable to pay interest bills on their ballooning debts.

Unctad said a recent increase in oil and some commodity prices had bailed out those countries that had previously faced the double whammy of a decline in export income and higher debt costs.

However, the likelihood of an escalation in trade war between the US, China and Europe, and slower global growth still left them vulnerable to defaulting on their rising interest bills.

The report also argued that developing-world countries were suffering at the hands of global corporations, most them based in the developed world.

It said: “Recent evidence from non-oil exports shows that, within the restricted circle of exporting firms, the top 1% accounted for 57% of country exports on average in 2014. The distribution of exports is thus highly skewed in favour of the largest firms.”

“This sheer size reinforced the gradual dilution of social and political accountability of large corporations to national constituencies and labour around the world,” it said.

Free-trade zones, often near coastal towns and port cities, have played a part in offering multinational companies a virtually tax-free base from which to assemble manufactured goods such as cars, fridges and cookers.

In a seemingly clear reference to the US tech giants Apple and Amazon, Unctad said: “The increase in profits of large “superstar” firms has been a major driver of global inequality, widening the gap between a small number of big winners and a large collection of smaller companies and workers that are being squeezed.”

Richard Mille Will Exit SIHH After 2019 (Update: Audemars Piguet Is Leaving Too!)