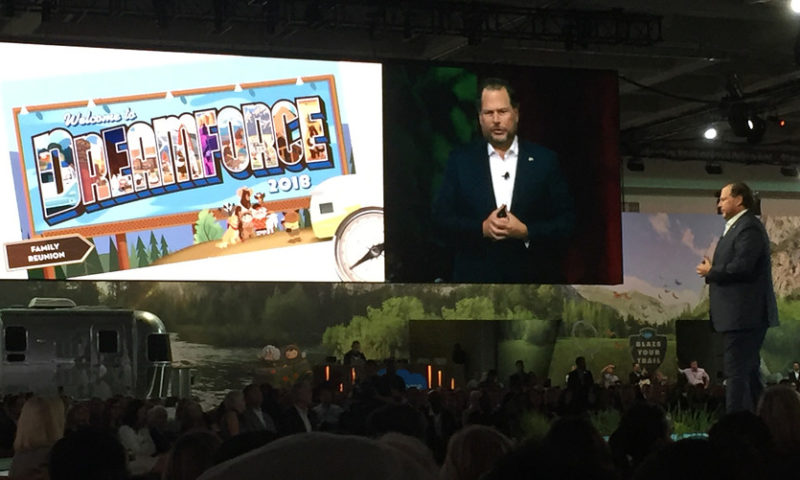 CFO Hawkins says customers who split time between cloud providers like Amazon, Google and Microsoft or with their own servers spend 10 times more than others

Salesforce.com Inc.’s revenue will be supported by customers who use more than one public cloud service, the software giant told analysts Wednesday at its Dreamforce convention in San Francisco, while maintaining its forecasts.

That march to $23 billion is powered, in part, by Salesforce customers who have data that is spread across multiple cloud providers like Amazon.com Inc. , Microsoft Corp. and Alphabet Inc., or on hybrid cloud systems with internal servers, Hawkins said. The CFO said that 38% of its customers are multicloud customers, but Salesforce generates 92% of its revenue from that minority of customers, which spend 10 times more on average than their single-cloud customers.

“This will power durable growth for years to come,” Hawkins said.

That works into Salesforce’s recent $6.5 billion acquisition of MuleSoft, which closed in May. MuleSoft uses application programming interfaces, or APIs, to help companies access or unlock data across legacy and mobile systems, and helps Salesforce power its Customer 360 product that allows it to gather customer data from a variety of sources and cloud platforms.

MuleSoft contributed $122 million in revenue during the most recent quarter, the company reported recently, which was more than expected. Salesforce did not increase its guidance for MuleSoft, but said it would report the acquisition’s contribution to revenue in future quarters. Earlier in the year, Salesforce said MuleSoft would contribute $315 million to revenue for the year.

Salesforce earnings: MuleSoft makes up about 4% of Salesforce revenue in debut

On Tuesday after the market closed, Chairman and Co-Chief Executive Marc Benioff delivered the convention’s opening keynote and highlighted its Siri-enabled Einstein Voice, following an earlier announcement that Salesforce was partnering with Apple Inc. AAPL, +1.03% Einstein uses artificial intelligence to provide predictions and recommendations based on a company’s business processes and customer data.

Of the 42 analysts who cover Salesforce, 38 have buy or overweight ratings, four have hold ratings and none have a sell rating, with an average price target of $169.42.

Amazon to build in BC