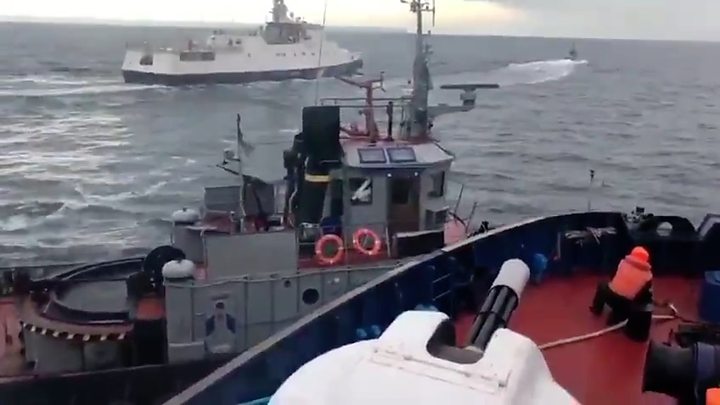 Ukraine’s parliament is to decide whether to bring in martial law, after Sunday’s capture of three of its naval vessels and 23 crew members by Russia.

The three ships were sailing off the coast of Crimea, which was annexed by Russia in 2014, when they were seized.

Russia opened fire, before its special forces stormed the vessels. Between three and six Ukrainians were injured.

Ukraine said it was a Russian “act of aggression”. Moscow said the ships had illegally entered its waters.

On Monday, Ukrainian President Petro Poroshenko said he was proposing that parliament back a 30-day martial law – half the length of that recommended by Ukraine’s security and defence council.

He said he did not want the measure to affect presidential elections set for 31 March 2019.

Sunday’s clash is the first time Russia and Ukraine have come into open conflict in recent years, although Ukrainian forces have been fighting Russian-backed separatists and Russia volunteers in the east since 2014.

In New York, the UN Security Council met to discuss the crisis – but failed to agree a Russian-proposed agenda amid sharp disagreements between Moscow and the West.

What happened on Sunday?

This is the chronology of the dramatic events that led to the naval clash:

In the morning, Ukraine said it had sent two gunboats and a tug from the Black Sea port of Odessa to Mariupol in the Sea of Azov
Ukraine’s navy then said Russian boats had tried to intercept its vessels, ramming the tug
Russia accused Ukraine of illegally entering its territorial waters
Russia scrambled fighter jets and helicopters as the Ukrainian vessels approached a bridge over the Kerch Strait – the only access to the Sea of Azov
The bridge itself was blocked by a tanker
In the evening, Ukraine said its vessels had been fired on and seized by the Russians. Six Ukrainian crew members were injured
Russia confirmed it had used weapons to force the Ukrainian vessels to stop, saying three Ukrainians were injured 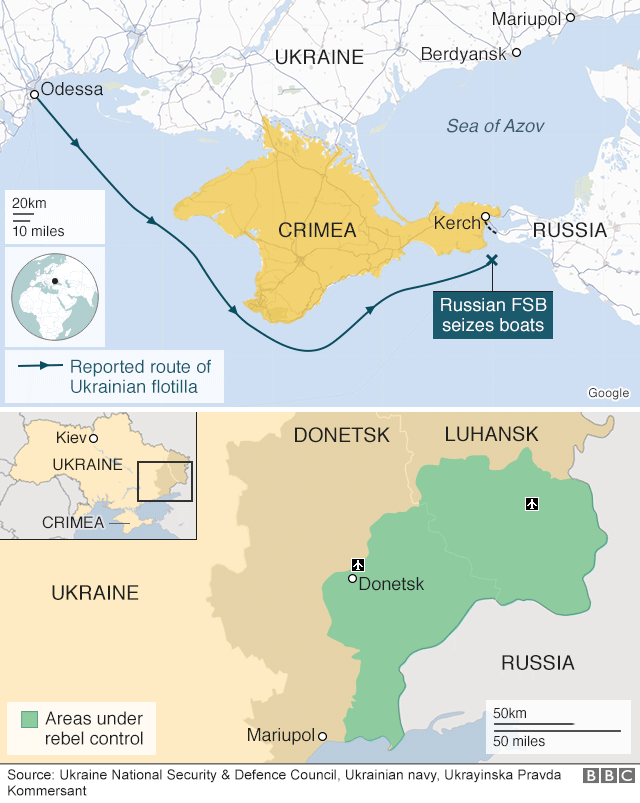 Russia said the Ukrainian ships were in its waters illegally because Moscow had temporarily closed an area of water for shipping.

Kiev called Russia’s actions a flagrant violation of international law, because the Black Sea is free for shipping, and Crimea belongs to Ukraine.

Ukraine also cited a 2003 Russia-Ukraine treaty on unimpeded access to the Kerch Strait and Sea of Azov.

It said it had informed the Russians in advance of its plan to move its ships to Mariupol – a claim denied by Russia.

In recent weeks, two Ukrainian vessels passed through the Kerch Straight without incident.

The incident in the Black Sea is a powerful reminder that the tensions between Russia and Ukraine are not part of a frozen conflict: they can flare up with very little warning.

Nato and Ukraine’s allies in the West have strongly backed President Poroshenko. But what can they do to influence Russian behaviour?

There will be talk of more economic sanctions. But Russia is already heavily sanctioned, and this has not encouraged it to rethink its annexation of Crimea. There will be calls for additional support for the Ukrainians; Nato countries provide training for Kiev’s military – they could presumably do more.

And the Trump administration, even before this episode, was already considering calls to sell additional weaponry to Ukraine in addition to the Javelin anti-tank missiles already supplied.

But there is a difficult balance to be struck between support for Ukraine’s territorial integrity on the one hand and avoiding anything that might tip the conflict into full-scale war.

Why is this happening now?

There have been growing tensions between the two sides over navigation in the area.

Russia has recently begun inspecting all vessels sailing to or from Ukrainian ports in the Sea of Azov.

This began after Ukraine detained a fishing vessel from Crimea in March. Moscow also says the checks are necessary for security reasons.

Ukraine has accused Russia of trying to occupy the Sea of Azov and damage Ukraine’s economy by hindering access its ports.

How has Ukraine reacted?

Late on Sunday, crowds gathered outside the Russian embassy in Kiev, some throwing flares.

At least one car belonging to the embassy was set alight.

The Ukrainian defence ministry announced that orders had been given to put the military on full combat alert.

What could martial law in Ukraine involve?

Martial law could give the government the power to restrict public demonstrations, regulate the media, suspend elections, and oblige citizens to carry out “socially necessary” tasks such as working at a defence facility, local media report.

Ukraine’s parliament is discussing how to proceed with the issue. A vote is expected later on Monday.

If backed by MPs, martial law would enter into force at 07:00 GMT on 28 November.

But some politicians are expressing concern it could still lead to the presidential elections being cancelled.

Some say President Poroshenko could be a main beneficiary, as his ratings have plummeted.

Why are relations so bad between Russia and Ukraine?

Ukraine gained independence after the collapse of the Soviet Union in 1991.

However, Russia considers a Western-leaning Ukraine a threat to its interests.

In 2014, Ukraine’s pro-Russian leader was overthrown, after large-scale protests against the government’s decision to abandon plans to sign an association agreement with the EU.

Russia then annexed Crimea, while Russia-backed separatists moved against the Ukrainian state in the east.

More than 10,000 people have been killed in the conflict in the east.