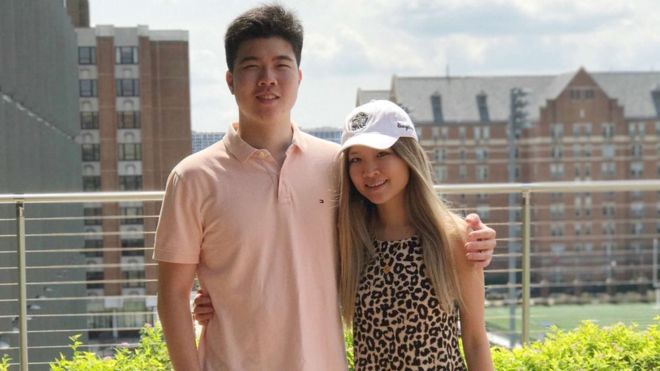 Chinese officials have defended their decision to bar three US citizens from leaving the country, saying they are suspected of “economic crimes”.

Victor and Cynthia Liu, children of a fugitive businessman, and their mother, Sandra Han, have been detained since June, the New York Times reported.

The US Department of State confirmed to the BBC that they are in “close contact” with the adult Liu children.

“As we understand it from the relevant authorities, these people you have mentioned all have legal and valid identity documents as Chinese citizens,” Chinese foreign ministry spokesman Geng Shuang told reporters at a news conference, according to the Agence France-Presse.

“They are suspected of having committed economic crimes and have been restricted from leaving China by Chinese police.”

The risks of dual citizenship

Beijing has shown that it doesn’t shy away from prosecuting dual citizenship holders and foreign passport holders with Chinese roots.

Lee Bo, a Hong Kong bookseller who also holds a British passport, was “first and foremost a Chinese citizen” when they detained him, according to China’s foreign minister Wang Yi in 2016.

China does not recognise dual citizenship, but it is relatively common for Chinese people to obtain foreign nationality without renouncing their Chinese citizenship.

The covert dual citizenship holders hold on to their Chinese identity cards and passports for various reasons ranging from getting access to Chinese welfare benefits to entering China conveniently.

It is also worth noting that the Chinese foreign ministry’s comment regarding Victor and Cynthia Liu’s case was excluded from the daily press briefing transcript published on the ministry’s website.

Questions considered sensitive to the Chinese government are sometimes omitted in the public transcripts, as a way for Beijing to downplay the issues and to limit the information spread out on domestic media platforms, which re-post the ministry’s briefing transcripts.

A US Department of State official told the BBC in an emailed statement that they are “in close contact” with Mr and Ms Liu and are providing “all appropriate consular services”.

While exit bans have often been imposed on Chinese-born foreigners, in this instance, Mr Liu is US-born. All three family members reportedly entered China on American passports.

Mr Liu, 19, and Ms Liu, 27, travelled with their mother to a tropical Chinese island this summer to visit their grandfather, according to the Times.

Days later, their mother – who is a Chinese-born US citizen – was detained by Chinese officials and allegedly taken to a “black jail” – a secretive detention centre.

Mr and Ms Liu have reportedly tried to leave the country three times and have been staying with an uncle.

They told the newspaper they are being held in order to lure their father, a former state-owned bank executive, back to face criminal fraud charges, though he reportedly cut ties with the family in 2012.

According to the China Daily paper, Mr Changming is one of the country’s 100 most-wanted fugitives facing arrest for alleged corrupt practices. He fled China in 2007.

Ms Liu wrote to National Security Adviser John Bolton in August, saying her family was being held as “a crude form of human collateral” to bait someone they have no contact with, the Times reported.

In January, the US Department of State issued a travel advisory regarding exit bans in China, warning that they have been imposed “to compel US citizens to resolve business disputes, force settlement of court orders or facilitate government investigations”.

“Individuals not involved in legal proceedings or suspected of wrongdoing have also been subjected to lengthy exit bans in order to compel their family members or colleagues to co-operate with Chinese courts or investigators.”

Dual-citizenship is not allowed under Chinese law, and US officials cautioned that US-Chinese nationals can be detained and denied US assistance in the country.

Ms Han is a businesswoman with millions of dollars in real estate holdings, the Times reported, and Ms Liu is a consultant at McKinsey & Company.

Mr Liu is currently a sophomore at Georgetown University.