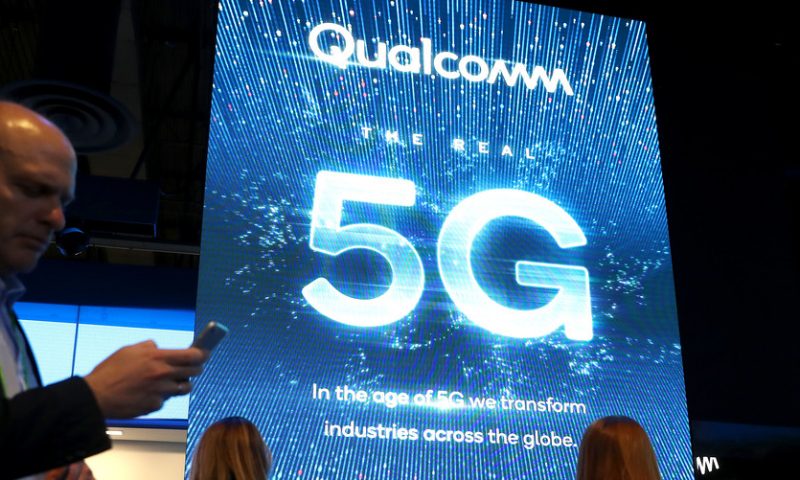 Qualcomm Inc. shares fell again Thursday as analysts responded to renewed uncertainty about the chip maker with a downgrade and price cuts on fears that a court ruling could cut earnings in half.

Qualcomm’s QCOM, +0.67% stock was down 4% in recent activity Thursday and dropped nearly 11% Wednesday after a federal judge sided with the Federal Trade Commission in an antitrust suit against Qualcomm, a little over a month after the company settled with Apple Inc. AAPL, +0.19% in a lawsuit dealing with similar issues. For the week, shares are down 18%.

Following news of the judge’s ruling, at least one analyst downgraded Qualcomm and eight analysts lowered their price targets. Mizuho analyst Vijay Rakesh cut his rating on Qualcomm to neutral from buy and lowered his price target to $65 from $90, saying the FTC ruling could cut Qualcomm’s earnings per share by 50% or more in a worst-case scenario.

Rakesh said that the ruling “inserts significant uncertainty into the Qualcomm licensing model” as the judge challenged the company’s practice of charging licensing royalties as a percentage of a smartphone’s average selling price.

Cowen analyst Matthew Ramsay, who has an outperform rating but cut his price target to $80 from $100, said if Qualcomm “were to have to renegotiate all of these licensing deals we are unsure of what the process could look like or how long it would take.”

Even though Ramsay said that Qualcomm was well-positioned to appeal the ruling, “how customers react in this period of prolonged uncertainty (particularly in U.S./China relations) is unclear and provides significant risks.”

In a note titled “Just When You Think You’re Out…They Pull You Back In,” Susquehanna Financial analyst Christopher Rolland said he was maintaining his positive rating but lowering his price target to $85 from $100, stating that a Qualcomm appeal could “take years” and that “remedies from the ruling are likely to hinder QTL profitability.”

Rolland said he believes “Apple will tread lightly in any renegotiations” because Qualcomm is way ahead of rivals in 5G modems and Apple needs to get a 5G smartphone to market by 2020.

Of the 25 analysts that cover Qualcomm, 15 have buy ratings, 10 have hold ratings, and none have a sell rating, with an average target price of $89.65, according to FactSet.