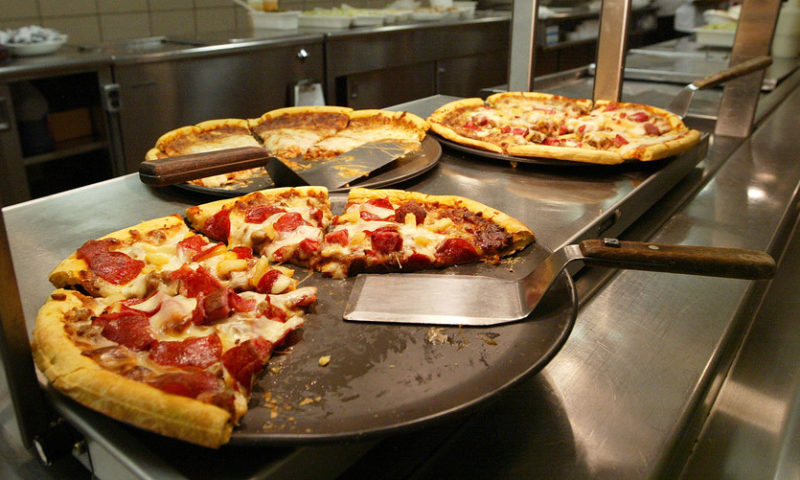 Pizza Hut recently announced that it’s boosting its digital footprint by purchasing the online ordering platform QuikOrder for an undisclosed amount. It hopes the service will help improve and personalize the Hut’s online ordering experience and make deliveries faster.

“Our consumers demand speed and ease of use,” Carol Clements, chief technology officer at Pizza Hut told Moneyish. “This acquisition will allow us to be more nimble and flexible from a digital and in-restaurant technology standpoint.”

Pizza Hut did not disclose the specifics of how exactly its new ordering system will change, but confirmed the process will be simpler. Currently, there is no location tracker, so customers must go through a three-step process of inputting their zip code and address or choosing the closest restaurant location before they can even place an order.

And with more than half of Pizza Hut’s U.S. sales (55%) being placed digitally, it makes sense that the pizza giant is putting more dough into its online ordering system. Yum! brands — which also owns Taco Bell and KFC — invested $130 million last year in improving its technology, the company confirmed to Moneyish, making it much easier for customers to order their favorite Meat Lovers or Buffalo Chicken pies on the fly.

“We’re thinking bigger than just Pizza Hut and Pizza Hut International. This technology has the potential to be scaled across the entire Yum! Family,” Clements said.

This is the latest tech tweak Pizza Hut has made to speed up its pizza delivery process as it competes with Domino’s and Papa John’s in the $256 billion fast food industry. The chain teamed up with Toyota for a prototype of its pizzeria on wheels called the Toyota Tundra Pie Pro featuring a robotic assembly line that heats up pizzas in less than seven minutes while en route to customers’ homes. Business Insider reported that the models could hit the streets by 2020.

The clash of the pizza chains is heating up. Pizza Hut and Domino’s hold almost half of the market share (48.1% of sales in 2016 ) and when you add on Little Caesars and Papa John’s, the four chains as a whole comprise 77% of all pizza sales.

Domino’s controls the biggest slice of the pie, however, with a reported $12.2 billion in global sales in 2017 compared to Pizza Hut’s $12.03 billion. The chain put out its Pizza Tracker app in 2008 that lets customers track their pizza from when it’s being put together up until arrives at their door, similarly to the one Pizza Hut has that also notifies customers when their pizza is being made and when its being delivered. And in 2015, the chain made ordering a pizza as simple as texting a pizza emoji or using Facebook Messenger, Twitter or via a smart TV to a Domino’s code. Last April it cooked up its HotSpots initiative, sending pies curbside to locations without an address, such as beaches, parks and bus stops. Domino’s has also put out kitschy innovations, like a pizza wedding registry last year. Domino’s did not reveal costs related to the projects, but it’s likely contributing to the fact that 60% of its business comes from digital orders alone, QSR Magazine reported.

Other pie chains are also keeping up with tech innovations. Last year, Papa John’s introduced its Facebook Instant Messaging ordering system allowing customers to order pizza on the social media platform. It’s the latest in tech firsts for the company, which launched its text message ordering system in 2007 and a customizable pizza ordering app for Apple TV two years ago. It’s all imperative to keeping up with demand. Papa John’s said that last year, 60% of its orders came from its phone app and other digital platforms, the Los Angeles Times reported.

And in Sept., Detroit-based Little Caesars put out its innovative Pizza Portal — a heated self-serve pickup station — at all of its locations across the country, letting customers who ordered through the mobile app pre-pay and then pick-up their food without having to wait in line.

And as apps like UberEats, Caviar and Seamless drive the growing on-demand delivery business — and offer pizza delivery from competing local shops — the big pizza chains have no choice but to continue evolving digitally with the times. Revenue for the online food delivery market amounts to $16,980 million and is expected to grow 7.5% by 2023, according to data from Statista.com.

“Those who can’t compete in terms of price, convenience, service and technology will fight an uphill battle against an undefeated competitor,” notes a study from global restaurant consultancy firm Aaron Allen & Associates in its Tech Friendly restaurant report published last year.