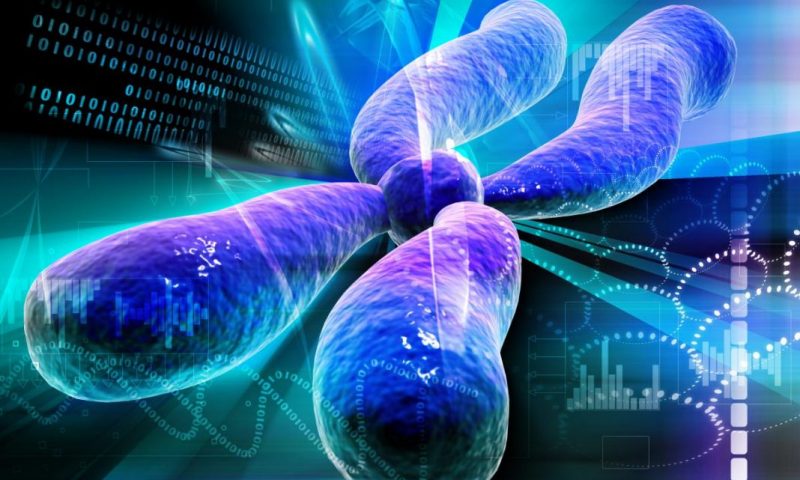 The X and Y chromosomes make an unlikely pair. The X is large and contains thousands of genes critical for life. The Y, by contrast, is small, with only a handful of genes. Its main purpose is to provide the instructions for initiating male development and making sperm. Yet these two chromosomes must work together to meet and pair up properly during meiosis. Although this has never been fully understood, scientists at Memorial Sloan Kettering Cancer Center (MSKCC) in New York City have found an explanation.

Their work is published in Nature, in a paper titled, “Ensuring meiotic DNA break formation in the mouse pseudoautosomal region.”

During meiosis, homologous regions of DNA are swapped between chromosomes, after being deliberately broken. Homologous recombination is vastly more challenging for males because most of the X chromosome has nothing to pair with. In fact, only a very tiny portion of the already tiny Y chromosome has any homology with the X. This region is called the pseudoautosomal region (PAR), and it’s critical for making sure that X and Y find their way into different sperm cells.

Scientists have known for a long time that the PAR undergoes breaking and swapping of segments at a level that far outpaces what one would expect, given its size. But, how cells ensure that recombination occurs in the PAR is unknown.

“On most chromosomes, DNA double-strand breaks typically occur once every 10 million base pairs,” said Scott Keeney, PhD, a molecular biologist at MSKCC who studies this phenomenon and senior author on the paper. “The PAR in mice is less than 1/10 that size but it still manages to undergo frequent double-strand breaks.”

What’s in a blob?

The key to proper pairing of X and Y, they discovered, is a repeated sequence of DNA in the PAR that attracts several double-strand break-related proteins to this region. These protein clusters—which Laurent Acquaviva, research fellow in the Keeney Lab and first author on the paper, dubbed “blobs”—change the architecture of the chromosome in this region.

In this work, the authors present a “dynamic ultrastructure of the PAR and identify controlling cis- and trans-acting factors that make the PAR the hottest segment for DSB formation in the male mouse genome.”

Similar blobs had been seen in images from published studies. But Acquaviva was the first to define what’s in these blobs and connect them to the hyper-accumulation of double-strand breaks in this region.” At first glance, the blobs just look like a mess you might see in the microscope if the experiment didn’t work,” Acquaviva said. “But they turned out to be completely predictable in number, timing, and location, so it became clear that in reality, they are very complex structures that the cell builds on purpose.”

In fact, he said, these blobs were key to understanding how the PAR DNA is tethered as short loops to the linear axis that is the structural backbone of the chromosome.

Though the X chromosome also has this same repeated DNA sequence, the two X chromosomes in female meiosis typically do not recombine at this region. Why not? The researchers showed that it is because pairing between other regions of the X tends to happen first and directly opposes breakage at the PAR.

The team found that, before break formation, multiple double-strand breaks promoting factors hyperaccumulate in the PAR, its chromosome axes elongate, and the sister chromatids separate.

They proposed that the repetitive DNA sequence of the PAR “confers unique chromatin and higher-order structures that are crucial for recombination.” Chromosome synapsis, they noted, triggers the collapse of the elongated PAR structure and oocytes can be reprogrammed to exhibit spermatocyte-like levels of double-strand breaks in the PAR simply by delaying or preventing synapsis.

Thus, they wrote, the sexually dimorphic behavior of the PAR is in part “a result of kinetic differences between the sexes in a race between the maturation of the PAR structure, formation of double-strand breaks and completion of pairing and synapsis.”

This strategy of recruiting more than one’s expected share of DNA-breaking proteins may not be limited to the PAR region. In a paper published earlier this month, the Keeney lab showed that small chromosomes in budding yeast resort to a similar tactic.