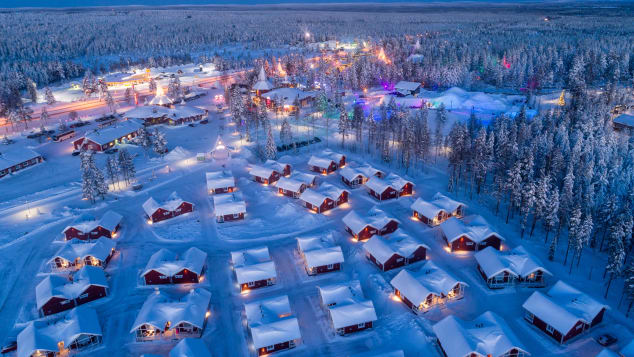 Finland – As thousands of families prepare to take their children on a magical journey to meet Santa Claus in his Lapland home, some holidaymakers are concerned that the winter wonderland may be missing a crucial element: snow.

Northern Lapland typically receives 20 to 30 centimeters of snow by the end of November, and it is usually snow-covered for around 175 days a year. But concerns are mounting that rising temperatures may wreak havoc on the region’s critical winter travel industry — the annual “Santa season.”

Travel operator TUI has canceled excursions to SnowVillage — a hotel made entirely of ice, located nearly 200 kilometers above the Arctic Circle — as warm conditions have delayed its construction.

“We have taken the difficult decision to cancel just the 1st and 2nd December day trips to that resort. We have directly contacted any affected customers with alternative options,” TUI said in a statement.

“It has been unseasonably warm in Lapland recently and there has been limited snowfall,” the travel operator said. “We have therefore canceled our first two departures of the winter and offered affected passengers alternative dates later in December at no additional cost. If the alternative dates were not suitable, we have offered a full refund.”

The unusual conditions are causing concern for officials, as the region witnessed its warmest day on record in July this year, reaching 32.2 degrees Celsius.

Ville Siiskonen, a meteorologist at the Finnish Meteorological Institute, told: “Depending on the projected scenarios, it’s expected that by the end of the century there will be much less snow, and in fewer places, in Lapland.”

Worried tourists have taken to social media to express dismay at the threat to their festive vacations.

“What’s up with the weather this year, still no snow in Lapland, reminds me of 2011 when the snow arrived just days before all the Santa trips,” one person wrote on TripAdvisor. Another said: “How do you explain to an 8-year-old that you are going to see Santa in the North Pole but there won’t be any snow! It just won’t be as magical as we were expecting.”A third expressed concern for the local community, writing: “It’s so sad because it’s an amazing place with amazing people, and they rely heavily on tourism for living — the start of December could be a disaster for the tourist industry there.”