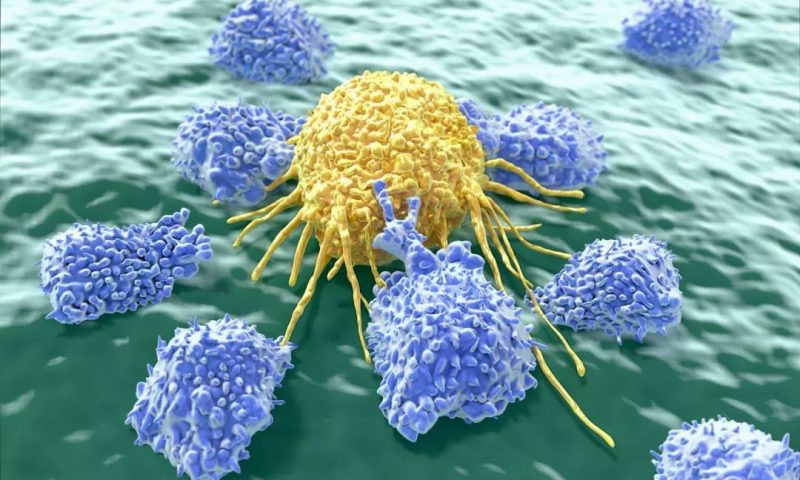 Before therapy, data shows all patients’ endogenous (native) NK cells are exhausted and no longer functioning.  Their native NK cells have lost the ability to kill cancer cells.  To date, nine patients have been treated in the escalating-dose part of the Phase I/II Expansion clinical trial.

Of particular note, GTB-3550 TriKE™ is currently being administered to patients at doses significantly higher than the reported MTD (Maximum Tolerated Dose) for continuous infusion of recombinant human IL-15 (Interleukin-15), (Waldmann, TA et al, Clin Cancer Res. (2019)
25:4945–54).  IL-15 is one of the most potent and, therefore, potentially dangerous, cytokines for killing cancer.  GTB-3550 is a single-chain, tri-specific scFv recombinant fusion protein conjugate composed of the variable regions of the heavy and light chains of anti-CD16 and anti-CD33 antibodies, and a modified form of IL-15.  The NK cell stimulating cytokine human IL-15 portion of the molecule provides a self-sustaining signal that activates NK cells and enhances their ability to kill.

“We are pleased with the continued clinical performance of our lead GTB-3550 TriKE™ product candidate as we continue dose escalation,” said Anthony J. Cataldo, GT Biopharma’s Chairman and CEO. “This early data indicates GTB-3550 therapy demonstrates significant bone marrow blast level reductions in AML and MDS patients without the need for expensive progenitor-derived or autologous/allogenic cell therapies.  We believe as we continue to dose escalate GTB-3550 TriKE™, more patients will experience greater clinical efficacy.  The ability of TriKE™ to be effective in the patient without the addition of outside supplemental engineered NK cells or the need for any combination drugs, sets TriKE™ apart from other cancer therapies.  This is also the reason why TriKE™ therapy will be significantly less expensive than other treatments, opening the door to an off-the-shelf therapeutic.”

GT Biopharma’s novel, first-in-class GTB-3550 TriKE™ Phase I/II clinical trial will proceed to the next cohort, dosed at 200 mcg/kg/day, after Patient 10 dosing concludes. GTB-3550 TriKE™ is a single-chain, tri-specific scFv recombinant fusion protein conjugate composed of the variable regions of the heavy and light chains of anti-CD16 and anti-CD33 antibodies and a modified form of IL-15. The NK cell stimulating cytokine human IL-15 portion of the molecule provides a self-sustaining signal that activates NK cells and enhances their ability to kill. Dr. Jeffrey S. Miller, Professor of Medicine at the University of Minnesota and GT Biopharma’s Consulting Chief Medical Officer, and his colleagues developed TriKE™. GT Biopharma has an exclusive worldwide license with the University of Minnesota to further develop and commercialize therapies using TriKE™ technology.