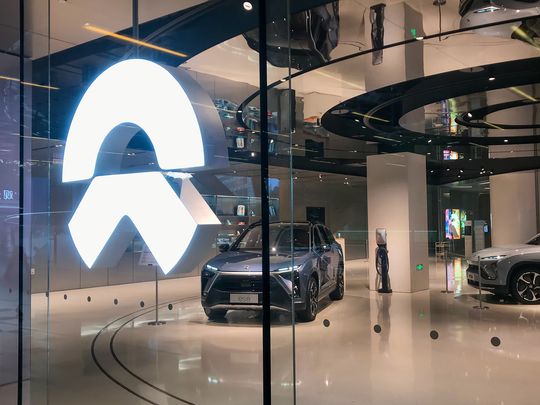 Nio may be a relatively small company. But investors are bullish on the Chinese electric-vehicle maker’s prospects.

Corrected to show Tesla delivered 201,304 vehicles during the second quarter.

Chinese electric-vehicle maker Nio Inc., which sells no cars in the U.S., has a market capitalization of $60.2 billion. By that measure, it is larger than Ford Motor Co., which was founded in 1903.

That might make sense to you as an investor — after all, Nio is an innovative company that sells only electric vehicles. Ford is a legacy auto maker that is working to catch up and eventually make a full transition to electric vehicles. Shares of Nio have more than tripled in the past year, while Ford’s have almost doubled after cratering in the previous decade.

So where does Nio NIO, which reported second-quarter results after the stock market closes Wednesday, fit in an investment thesis? Below are screens showing how its stock valuation compares to vehicle production, and how that valuation relates to projected earnings through 2025.

For the second quarter, Nio delivered 21,896 vehicles for a 112% increase from a year earlier. The growth is impressive, but the total number of vehicles sold is still relatively small.

Here’s a look at the 10 largest auto makers by market capitalization, along with their second-quarter sales or delivery numbers (whichever was higher, if both were reported) and additional color below the table:

Click on the tickers for more about each company.

You can see that those valuations are about the future, when innovators in the EV space — Tesla Inc. TSLA and Nio, on this list — may (or may not) become as large as legacy players.

One thing to be aware of is that the legacy auto makers don’t all report their unit sales the same way. Most don’t break out electric vehicle sales.

Among those that do, definitions vary. For example, Toyota Motor Corp. TM JP:7203 reported that “electrified vehicle” sales made up 26.6% of total auto sales during the second quarter. But that category includes:

For Toyota, BEV made up only 0.2% of second-quarter sales, while they accounted for 100% of sales for Nio and Tesla. Toyota’s PHEV sales made up 1.4% of the total.

Volkswagen AG VWAGY XE:VOW reports electric-vehicle sales as including PHEV, which accounted for 6.7% of second-quarter sales, or BEV, which made up 4.4% of total sales. Those are impressive numbers: a combined 11.1%.

For Bayerische Motoren Werke Aktiengesellschaft BMWYY XE:BMW, better known as BWM Group, a second-quarter breakdown of electric-vehicle deliveries isn’t yet available, but for the first half of 2021, 153,243 all-electric or plug-in hybrid vehicles were delivered, or 11.4% of total deliveries.

For companies at early stages, comparisons of price-to-earnings ratios may not mean very much. Such companies are focusing on growth rather than profits. An example of this has been Amazon.com Inc. AMZN, which has traded at a high P/E for decades as it has worked to expand into new lines of business, at the expense of the bottom line.

A high P/E ratio can reflect investors’ enthusiasm for innovation and in the case of EVs, a political consensus for transforming the industry. So Nio and Tesla trade at much higher P/E ratios than the legacy auto makers.

Then again, very low P/E may show too much contempt among investors for the older manufacturers, as they use their cash flow from continuing massive sales of traditional vehicles to fund their development of EVs. Opportunities may be highlighted.

Nio is expected to become profitable in 2023. Looking out to 2024, its forward P/E is lower than that of Tesla. To put the forward P/E valuations in perspective, the S&P 500 Index SPX trades for a weighted 20.5 times consensus 2022 EPS estimates.

Valuation to sales
Forward price-to-sales estimates might be more useful for early-stage companies that are showing low profits or net losses. Then again, the same distortions apply: Investors love the pure-play EV makers now, and may be paying too much for them when you consider that shares of Nio have more than tripled over the past year, while Tesla’s stock has risen 150%.

Here’s a similar set of data driving price-to-sale ratios, again using current market caps (in the first table at the top of this article) and consensus full-calendar-year estimates in millions of U.S. dollars:

Here’s a summary of opinion of the 10 auto makers among analysts polled by FactSet. For companies with primary listings outside the U.S., the local tickers are used. All share prices and targets are in local currencies:

Vroom sells more cars than ever, but stock falls