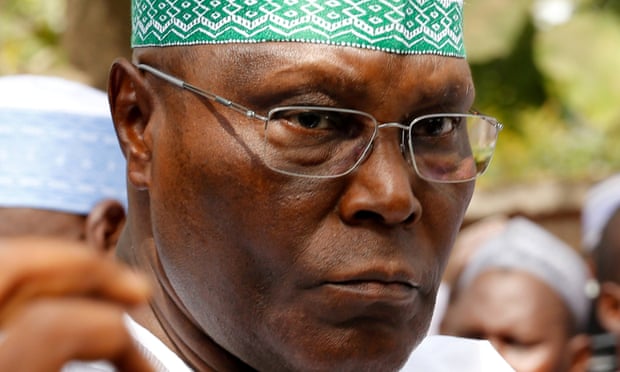 Nigeria’s opposition leader has rejected a claim by the incumbent, Muhammadu Buhari, that he won the presidential election, denouncing the poll as a “sham” and vowing to mount a legal challenge.

Hours after the president was announced the winner of Saturday’s delayedelection, Atiku Abubakar said that the reason he had not called Buhari to congratulate him was because he had “never seen our democracy so debased”.

Atiku – the former vice-president and wealthy businessman is known countrywide by his first name – said there had been “manifest and premeditated malpractices in many states”. He compared the election unfavourably with that of 2007, widely considered the worst in Nigeria’s history, in which Buhari was runner-up and Abubakar came a distant third.

According to the country’s Independent National Electoral Commission (INEC), the People’s Democratic party (PDP) candidate scored 11,262,978 votes to finish second after Buhari of the All Progressives’ Congress (APC), whose 15,191,847 votes secured his reelection for a second term in office.

The elections, Nigeria’s sixth since its return to democracy in 1999, were seen as a referendum on the presidency of Buhari, the tough-talking former general who was also a military head of state in the 1980s. Despite seeming unpopular with large sections of the population, Buhari managed to retain most of his base and do well in opposition strongholds.

The bulk of Buhari’s votes came from four of Nigeria’s 36 states: Kano, Katsina, Kaduna and Kebbi, nicknamed the Kardashian sisters by election observers for their alliterative coincidence with the American celebrity family. The states have consistently given huge margins to Buhari since his first attempt at becoming civilian president in 2003. This time, they contributed a cumulative 4.2m votes – about a quarter of Buhari’s eventual tally.

Local observers pointed to irregularities and violence during the polls, which continued into Sunday morning in some areas, hours after voting had been concluded in most states.

Adewunmi Emoruwa of The Election Network said the poll fell short of expectations. “The numbers alone are indicting. We have already witnessed a record number of cancelled votes – more than double the numbers from the previous poll – and which is only a reflection of the widespread irregularities across every part of the country. We all observed as thugs had a field day unleashing terror on demographically profiled voters, which led to the suppressed turnout that has been recorded.”

In 2015, Buhari’s predecessor, Goodluck Jonathan, called his opponent within hours to congratulate him, a rare occurrence in the country’s intricate and dramatic politics, but Atiku insists he will not go down the same route.

“If I had lost in a free and fair election, I would have called the victor within seconds of my being aware of his victory to offer not just my congratulations, but my services to help unite Nigeria by being a bridge between the north and the south,” he said in a statement released on Wednesday morning.

“In 2019, it is sad to see those who trampled on democracy thumping down their noses on the Nigerian people,” he said. “We will not allow democracy to be emasculated. I hope and pray Nigerians will someday summon the courage to defend democracy.”

Buhari, who became president on his fourth try in 2015, lost all of his cases at the supreme court after his previous three attempts at the presidency in 2003, 2007 and 2011.