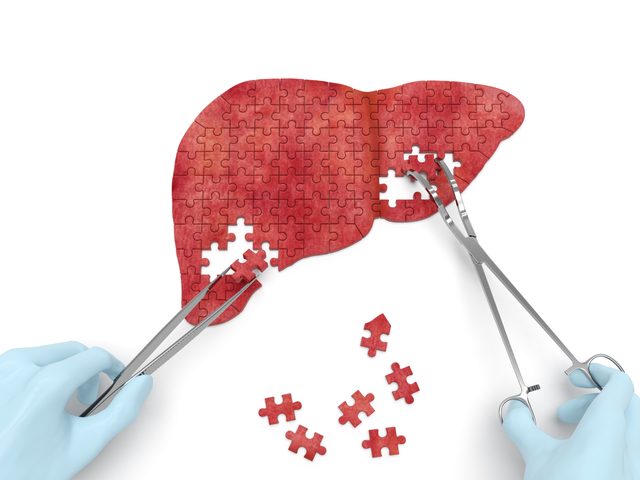 Last fall, NGM Bio unveiled data from a small group of patients showing its NASH drug cut liver fat in a phase 2 study. Now, the company is reporting results for all 78 patients in the study, showing the treatment beat placebo at reversing liver scarring and inflammation, as well as reducing liver fat buildup.

The study pitted a once-daily dose of the drug, aldafermin, against placebo in patients with nonalcoholic steatohepatitis (NASH) confirmed by liver biopsy who had stage 2 or stage 3 fibrosis. Of the 78 patients, 53 received aldafermin and 25 received placebo.

After 24 weeks of treatment, the study hit its primary endpoint, logging an absolute mean reduction of liver fat content (LFC) of 8% over the 3% achieved by placebo. The drug also performed well against its secondary and exploratory endpoints—twice as many aldafermin patients as placebo patients saw their fibrosis, or scarring, reduce to stage 2 or even stage 1 fibrosis without any worsening of NASH (38% vs. 18%). Nearly triple the number of aldafermin patients achieved NASH resolution—improvements in liver inflammation and liver cell ballooning—without their scarring getting worse (24% vs. 9% for placebo).

NGM CEO David Woodhouse, Ph.D., highlighted aldafermin’s advantage over placebo in an endpoint combining the fibrosis and NASH resolution measures: no patients on placebo hit this endpoint, while 22% of patients taking aldafermin did. The composite endpoint was a more challenging endpoint and is an acceptable endpoint for a pivotal trial for accelerated approval by the FDA, Woodhouse said on a conference call to discuss the study results. It is a required endpoint for speedy approval from the European Medicines Agency, he said.

NGM’s stock lept as much as 35% on Monday morning.

The study’s other endpoints also included liver enzyme levels and the NAFLD Activity Score (NAS), a measure of fatty liver disease activity that includes liver fat buildup, inflammation and ballooning of liver cells, a sign that they are deteriorating and on their way to cell death. Nearly two-thirds of aldafermin patients saw their NAS improve by two points, vs. 9% of patients taking placebo.

Side effects, including diarrhea, headache and nausea, were similar across both patient groups. Three patients in each arm quit the study, but the company said the dropouts were not related to side effects, except for one patient in the placebo arm.

The investigators did see a hike in LDL, or bad, cholesterol in patients taking aldafermin that was consistent with the way the drug, an engineered version of the hormone FGF19, works to treat liver disease. Those increases were “completely mitigated with concomitant statin use,” and cholesterol levels returned to baseline levels by the sixth week of treatment, said Hsiao Lieu, M.D., NGM’s chief medical officer, on the call.

“These preliminary results are remarkable and show that aldafermin’s rapid and profound effect across all histological measures of NASH previously seen at 12 weeks is sustained, and also suggest that extended treatment may lead to further improvement in liver health. Moreover, these data further strengthen aldafermin’s potential as a transformative monotherapy for NASH patients with established fibrosis,” said the study’s principal investigator Stephen Harrison, M.D., medical director at Pinnacle Clinical Research and a visiting professor of hepatology at the University of Oxford in the U.K.

The news comes during turbulent times for NASH drug developers. It seems like everybody in biopharma’s developing a treatment for the disease, which is currently treated with lifestyle modifications, such as diet and exercise. Gilead has seen multiple late-stage failures in its NASH pipeline and tandem Boehringer Ingelheim and Pharmaxis canned their fatty liver program in December. And France’s Genfit, which is racing Intercept Pharma to get the first NASH drug to market delayed a phase 3 readout for its candidate, elafibranor.

NGM plans to present full data for the study at the European Association for the Study of the Liver in April. It’s also moving full steam ahead on its phase 2b study that’s testing three dose levels of aldafermin in the same kind of patients. Enrollment for that study is slower than NGM expected, thanks to competition for various NASH studies, including its own, Woodhouse said on the conference call. The company now expects to wrap that study in the first half of 2021 instead of at the end of this year. The company will also kick off another phase 2b study which will assess the drug in patients with more advanced disease, namely those with cirrhosis, in the first half of this year.