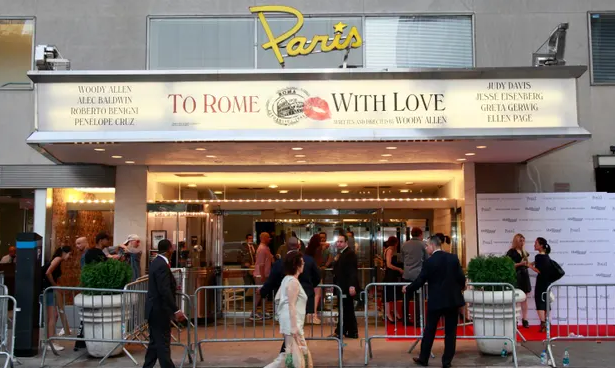 Future of city’s last single screen cinema, opened by Marlene Dietrich and frequented by David Bowie, hangs in the balance

The Paris Theatre has become one of New York’s cultural landmarks since it was officially opened by the actor Marlene Dietrich as a cinema for showing French films in 1948.

Down the road from Central Park and across the street from the Plaza hotel, it attracted queues around the block as the go-to place to watch arthouse and foreign language films and was known for showing the same movie for months on end.

In the early 00s it gained cult status with Sex and the City fans after Carrie Bradshaw declared it one of the best features of Manhattan life because “any night of the week you can go to Paris”.

Over 70 years later, even in the post-Netflix age, it remains a popular venue for film screenings and premieres. As the city’s last remaining single screen and the only movie theater with a functioning curtain, it has also become a rare relic of cinema’s heyday.

But now the future of the cinema hangs in the balance, according to industry insiders who warn it is at risk of imminent closure – with some saying it could close as early as this month.

But Tom Bernard, co-president and co-founder of Sony Pictures Classics, which regularly showcases films at the venue, claims the rumours are true.

He said: “Through my contacts we found out Sheldon Solow has decided to close the theatre and we were shocked. He owns the building, he’s owned it forever and for whatever reason, no one can find out the reason why, he’s closing it.”

Currently the cinema is showing Pavarotti, a new documentary about the late opera star by Ron Howard, but no further films are listed on the “coming soon” section of the its website and no tickets are available to buy online after 11 July. Bernard said: “We’ve inquired about a number of films and they are not taking bookings.”

If the cinema closes, it will mark a blow for fans of the Paris, but also the overall health of New York’s cinema landscape, which has taken a knocking in recent years with the closures of the Lincoln Plaza and Sunshine Cinema last year, and the Ziegfeld, another single-screen cinema, in 2016.

Like many businesses in New York, cinemas are often on 10-year leases, putting them at the mercy of the cutthroat world of New York real estate. Bernard said: “[The Paris] is a huge loss and it’s shocking for a city that has such a taste for specialised product. The venues continue to shrink.”

It’s also bad news for makers of specialised and foreign films, for whom venues like the Paris give a platform and might not otherwise have been given a chance. In the case of 2017’s Call Me By Your Name, a gay love story starring Armie Hammer and Timothée Chalamet which became a box office hit, Bernard said the Paris was “an anchor for the rest of the country to see this movie was doing this”.

Theatre historian Joe Rosenberg, who successfully campaigned for landmark designation for Radio City Music Hall and 35 Broadway theatres, said it is difficult for single-screen cinemas to survive because they depend on a distribution model that no longer exists.

In the past, art films would start in single-screen cinemas like the Paris, where they would play exclusively, before moving on to others if they were a success. Now, he says, distributors prefer multiplexes because they can show films on multiple screens, and give them a longer shelf life.

“So it starts off in a large auditorium and then when the audience falls it goes into a medium-sized auditorium and then the small auditorium, but it’s still played in the same place for three to four weeks,” said Rosenberg. “You can’t do that in a single screen cinema … As soon as numbers fall off they have to give up the film and bring in a new film.”

Architecturally he said the Paris, which has 586 seats, is “understated and beautiful” and from a time period that very few cinema theatres were built. The disappearance of the Paris, he said, would be “a loss from the old days”.

Going forward, he believes the future of films is certain, but that of cinemas is not. “Motion picture palaces were hurt by television, theatre was hurt by talking pictures, Vaudeville was murdered by talking pictures. And now cinema is being hurt by streaming and Netflix,” he said.

Outside the Paris earlier this week, cinemagoers at an evening screening of Pavarotti were disappointed over its rumoured closure.

“Well, it’s classic New York, it’s been here forever,” said Paris regular Cameron Henderson, 38, an actor from the Upper West Side, when asked what he likes about the theatre. His partner, Peter Eskowicz, 37, added: “And it’s a one-screen theatre, there’s a balcony, it’s like seeing live theatre, it’s like going to a Broadway show, but seeing a movie. And the Ziegfeld [was the] same way, we saw so much at the Ziegfeld … Now this is really the only one.”

But Eskowicz admitted that despite his love of the Paris, ticket prices – $18 for adults – can be off-putting. “I love the theatre, but I look and I go, ‘$18 …’ I know it’s going to stream in the next six months.”

Paris regular Roberto Borgatti, 47, who works at a sports education website, said he is not holding out for the Paris’s neighbour at nearby Trump Tower to help. “Obviously Donald Trump, even though he’s just a few blocks away, isn’t going to save the place,” he said.