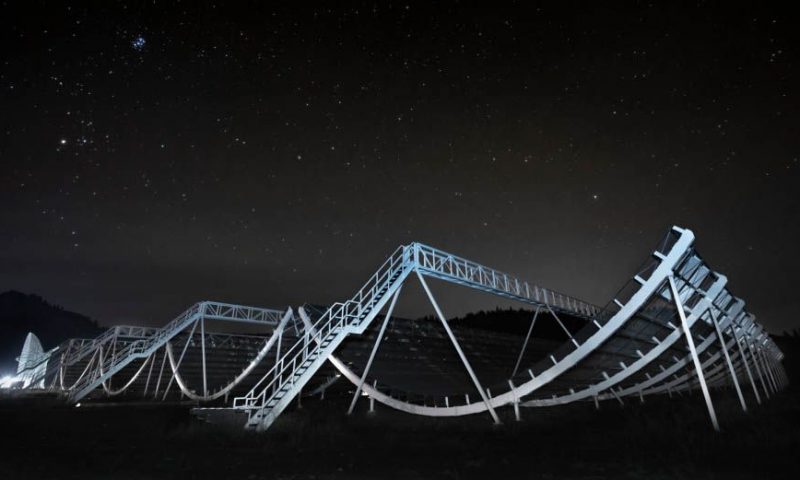 One of the universe’s deep mysteries just got a lot stranger. Astrophysicists have discovered a clue that could help explain why, every once in a while, superfast bursts of radio waves flash across Earth from deep space. But the clue — a repeating 16-day pattern in one of the bursts, undermines one of the most popular theories for where the bursts are coming from.

Fast radio bursts (FRBs) have likely happened for billions of years. But humans only discovered them in 2007, and have detected only a few dozen of them since. And in June 2019, astronomers finally tracked an FRB to its home galaxy.

But no one knows what causes them. Because these bursts are so rare, unusual and bright — considering that they’re visible from billions of light-years across space — physicists have tended to assume they come from a cataclysmic event, such as the collision of stars.

This repeating pattern, however, suggests that something else is going on, that there’s some sort of natural machine in the universe for pumping regular shrieks of radio energy across space.

Researchers looking at data from the Canadian Hydrogen Intensity Mapping Experiment Fast Radio Burst Project (CHIME/FRB) first spotted this FRB, known as FRB 180916.J0158+65, in 2019. In January 2020, they published a paper in the journal Nature that reanalyzed old data and found more than one burst from FRB 180916.J0158+65. They traced this FRB back to a relatively nearby spiral galaxy. What’s new in this latest paper, published Feb. 3 to the arXiv database, is the regular pattern in the bursts. The FRB, they found, goes through four-day cycles of regular activity, bleating out radio waves into space on an almost hourly basis. Then it goes into a 12-day period of silence. Sometimes the source seems to skip its usual four-day awake periods, or lets out only a single burst. CHIME/FRB is able to watch the FRB only some of the time, they noted, so it’s likely the detector misses many FRBs during the awake period.

No one knows what this pattern means, the researchers noted in a statement, but this pattern doesn’t fit neatly into any existing explanations for FRBs.

In general, patterns like this in astrophysics are often related to a spinning object or orbiting celestial bodies. Neutron stars often seem to strobe regularly from the perspective of X-ray detectors on Earth, because hot spots on their surface spin in and out of view like a lighthouse beacon. And tiny planets may dim the light of the stars they orbit everytime they pass between that star and Earth.

In other words, for astrophysics, patterns tend to indicate rotation. But no one knows if this pattern governs all FRBs or just some of them.

Biohaven’s anxiety med fizzles in phase 3 but carries on in Alzheimer’s, OCD