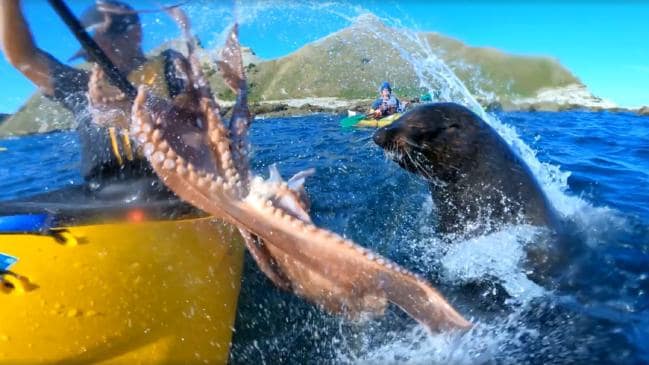 ‘I could feel all the hard parts of the octopus on my face,’ says Kyle Mulinder

A kayaker paddling in the waters around New Zealand has been given an unusually close look at its marine life when a seal appeared to throw an octopus at him.

Kyle Mulinder was enjoying a clear day on waters off the coast of Kaikōura in the South Island when he was slapped in the face by the tentacles of the flying creature.

Mulinder told Australia’s Seven News he and his friends had been watching a seal tussle with a large octopus near their kayaks, before the seal burst out of the water with the animal lodged between its jaws.

“We were just sitting out in the middle of the ocean and then this huge male seal appeared with an octopus and he was thrashing him about for ages,” Mulinder told the news channel. “I was like ‘mate, what just happened?’ It was weird because it happened so fast but I could feel all the hard parts of the octopus on my face.”

Mulinder, who works for Go Pro, had a camera attached to his boat which captured the bizarre encounter.

Seals mainly eat fish, but they will consume any type of protein they can find, including octopus, squid, crustaceans and shellfish.

The seas off the coast of Kaikōura are renowned for their marine life, drawn to the region by the 50km-long Kaikōura canyon, which creates an unusual series of sea currents that sustains a rich food chain.

In 2016, an earthquake in the area caused a massive undersea landslip that killed much marine life including seals, abalone and shellfish. In the months after the quake whales and dolphins, which were usually common in the area, disappeared and scientists feared they would not return.

£50,000 for gold watch Titanic widows gave to their rescuer